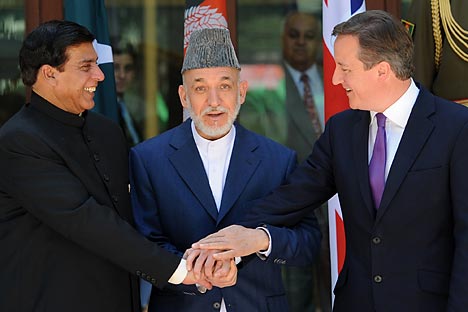 This is one of those rare moments when Britain steps out of the shade on to the arena to display its leadership role in Afghanistan.

The trilateral meeting of the leaders of United Kingdom, Pakistan and Afghanistan in Kabul on Thursday is an extraordinary event. British PM David Cameron, Pakistani PM Raja Pervez Ashraf and Afghan President Hamid Karzai took part. This was the first such high-level meeting of the 3 countries. The initiative came from Cameron.

No doubt, Cameron is acting in tandem with the Barack Obama administration. Obama has his hands full with the re-election bid and the Afghan peace process needs to be galvanized at the earliest, failing which the NATO’s drawdown through 2013 becomes problematic. Thus, Cameron is stepping in to ensure that things got moving on the ground.

This is one of those rare moments when Britain steps out of the shade on to the arena to display its leadership role in Afghanistan, which is commonly assumed to be the exclusive prerogative of the United States.

Cameron is continuing with the mediatory role that he undertook by visiting Pakistan in April at the peak of the US-Pakistan standoff to ease tensions and get the two erstwhile allies take a deep breath and re-engage – a diplomatic exercise that has since borne results.

The Kabul meet is Part II of Cameron’s mediatory role to bring about a rapprochement between Islamabad and Kabul, in the absence of which the US-Pakistan tango cannot advance on the ground although it is looking good already. The focus here is to get the talks with the Taliban going. Clearly, Pakistan’s centrality in the peace process is once again being openly acknowledged by the Western powers.

This is also Ashraf’s first visit to Kabul after taking over the post of PM. Interestingly, he held a separate meeting in Kabul at the Pakistani embassy with the leaders of the erstwhile Northern Alliance groups – Ahmad Zia Massoud, Ustad Mohammad Mohaqiq and Faizullah Zaki.

The confabulation with these leaders drawn from the Tajik, Hazara and Uzbek communities respectively is intended to show that Pakistan is not wedded exclusively to the Pashtun interests and would welcome an intra-Afghan dialogue leading to reconciliation that is truly broad-based.

Ashraf has been quotes as saying, “We want to work closely with Tajik, Hazara and Uzbek leaders to strengthen our relations with these communities for stability in Afghanistan.”

The meet in Kabul underscores that Islamabad is pressing ahead with the revival of security and military cooperation with the United States despite the domestic opposition within Pakistan. The fact that Britain’s prime minister has openly staked his prestige means that matters are reaching a point of takeoff.