Day Two: One good cry near the Red Square 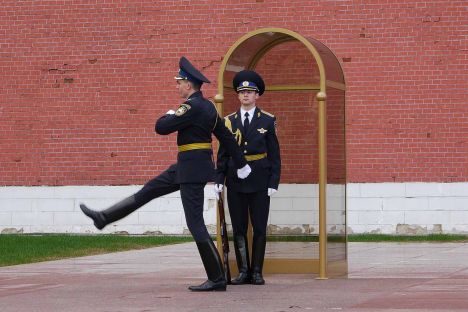 The guard change at the eternal flame which represents the millions of soldiers who perished during The Great Patriotic War. Source: Mathew G. Crisci

... Within a matter of minutes I went from laughing so hard I cried to viewing something so moving that it made me I cry. Not far from Red Square burns the the eternal flame that represents the millions of soldiers who perished during The Great Patriotic War. ... .

I awoke from a deep sleep to the ringing of the telephone. The distinctly Russian voice said “Hallo, Mr. Crisci, this is Sergei, guide. We await you downstairs.” I looked at my Blackberry. It was 10:05 AM!

When I arrived at the lobby coach, I was greeted by four smiling Brits in their 70s. They introduced themselves as David, Charles, Joyce and Annette. Nothing was said, but I could feel we were not off to a great start. The tour was supposed to start at 9:30. Sergei announced (as he glared at me), “First stop Red Square, then we see, maybe St. Basil's, maybe more Square. Depends on time.”

I attempted to bond. “I was surprised on my last visit, how Stalin’s presence has been completely marginalized at the Square.” Sergei replied: “You here before?” He offered a familiar response as we climbed into a white mini-van, “System (socialism) good; man bad, very bad. We find new system, but not American system.” I think to myself, in less 30 minutes I’ve pissed off Sergei, tired the patience of England and gotten into a war of words about forcing American democracy on a former military rival.

My pseudo enlightened mind tried to dig out of the hole…“Most Americans don't understand the difference between communism and socialism. American democracy may work or us, but we need to better understand that Russia's history and culture will ultimately guide them to develop of a form of social democracy that works for them.” I paused. “And, that process could take 20 to 30 years or more.”

David chuckled, “Gad! An insightful Yank.” He paused. “You know we’re grateful and all, couldn't have won that war without you, but you've never been the brightest crayons in the box with respect to international sensitivities.”

Making the Best of a Difficult Situation

At Red Square, there was an unstated air of disappointment: the Square was cordoned off in preparation for President Putin‟s inauguration on May 7th and the all-important May 9th Victory Day celebration. Fortunately, I shot my brains out 3 years ago, so all I needed was a few “been here recently” pictures.

The quick-witted Sergei didn't miss a beat, “no matter, now we be first inside St. Basil‟s (something I didn't do the last trip).”

What a blast! The place oozed of a mysterious heritage locked in a time capsule: winding staircases, tiny chapels, circular meditation rooms, and ornate, restored wall scrolls. I pointed my camera, a “substantial Svetlana” suddenly stood between me and the wall. She shook her hand. Sergei explained, “No pictures without a special pass.” I thought to myself, no way, I had come this far to be rebuffed, so I did the unspeakable. Sergei kind of noticed, but turned his head.

The Wonders of Communism

Once outside, Sergei explained he had been KGB for many years. He asked if we would like to know the 7 Wonders of his Communism? Only take a minute.” 57 seconds later we were all doubled over in laughter. Click here to enjoy Sergei's unique delivery.

In the event you are unable to open the video, Sergei has authorized me to summarize the Seven Wonders for the readers edification.

1. Under Communism, everybody had a job.

2. Despite the fact that everybody had a job, nobody worked.

3. Despite the fact that nobody worked, the 5 year plan was completed 100%.

4. Despite the fact that the plan was completed 100%, there was nothing in the shops.

5. Despite the fact there was nothing in the shops, everybody had everything.

6. Despite the fact everybody had everything they needed, everybody was stealing.

7. Despite the fact that everybody was stealing, nothing was ever missing.

Within a matter of minutes I went from laughing so hard I cried to viewing something so moving that it made me I cry. Not far from Red Square burns the eternal flame that represents the millions of soldiers who perished during World War Second (or as the Russians call it, The Great Patriotic War). Every hour there is a changing of the guard, a ceremony that is both elegant in its simplicity and memorable for its emotional intensity.

It was time for lunch. Since the afternoon would revolve around the State owned Tretyakov Gallery on the other side of Red Square, we opted to eat at the Gallery. The cafeteria was quite pretty with a first class array of goodies. Since I had missed breakfast, I wolfed down a meat pie, (in Russia, meat is meat, regardless of which type), a jumbo hot dog, a shredded cabbage salad, a double-decker salmon sandwich, a large berry juice (same deal as meat), a cup of green Chai (tea), and a berry-laden turnover!

After lunch, the group entered the gallery, while I waited in the lobby for my personal tour guide, an art expert, identified only as “Mike” by my NY friend, Dr. Ekaterina Doubrovina, who had been kind enough to make the arrangements. Before parting the Brits and I agree to meet back at the hotel for dinner at a place TBD. I assured them I would be on time. No excuses.