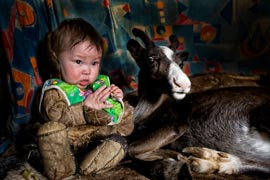 A kid in a tent in the Yamal-Nenets Autonomous District

Russian Federation: A kid in a tent in the Yamal-Nenets Autonomous District. Source: Lori / Legion Media

Related article: A not-so-extreme vacation in the Russian North