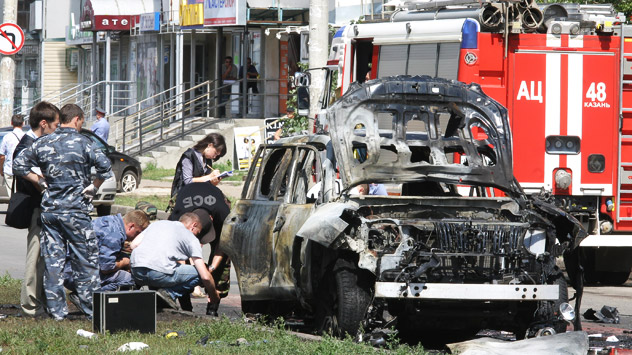 The Tatarstan mufti's service car was blown up in Kazan at 11 a.m. on Thursday, causing fatalities. Source: ITAR-TASS

This week’s terrorist attack in Tatarstan is part of the massive upheaval unfolding in the so-called Greater Middle East stretching from the Levant to the borders of China.

The two terrorist attacks on the Muslim leaders in Russia on Thursday in which a prominent cleric was killed and the Chief Mufti of Tatarstan was injured, took place almost simultaneously and were apparently a well-coordinated incident carrying a far-reaching political message. The Kremlin regards the incident as a “serious signal”.

Indeed, the incident assumes much importance from a security angle, regional angle and in terms of the geopolitics of Central Asia and Afghanistan as well.

This is the first incident of violence against religious leaders in the Muslim-majority region of Tatarstan. It signifies that religious extremism is spreading beyond the North Caucasus. The fact that Tatarstan is a prosperous region with a tradition for cultural diversity and religious tolerance – one-third of the people are followers of the Russian Orthodox Church – shows that the terrorist strike was a motivated conspiracy.

The two clerics who were attacked have been notable for their anti-Wahhabi stance. Conceivably, hardline Islamists struck. Traditional Islam that has been a cultural trait of Russia’s Volga region through centuries is coming under challenge. It has echoes of what happened in Daghestan, where through the past decade or so, “pure Islam” propagated by the Wahhabists muscled its way violently to replace traditional Islam.

Of course, there are obscure external dimensions. Valiulla Yakupov, who was killed, used to be the deputy to the Grand Mufti and in charge of the religious education department. He resisted the Tatar youth studying in foreign madrasahs, dismissed ultraconservative Mullahs and banned textbooks from Saudi Arabia. Yakupov’s virulent opposition to Wahhabism and Salafism spreading across Tatarstan made him a key target for the terrorists.

The city of Kazan, where the terrorists struck, is Russia’s “gateway” to the Central Asian region. No doubt, Thursday’s terrorist strikes will send shock waves throughout Central Asia. There are disturbing parallels.

Central Asia’s Islamic heritage is also of traditional, moderate Islam and in that region too – like what happened to Afghanistan in the 1980s – extremist forms of Wahhabism and Salafism are straining to gain dominance, often with encouragement and even state support from foreign countries. In fact, Central Asia’s situation is far more perilous than Tatarstan’s since there are serious socio-economic contradictions in the region that lend themselves to exploitation by religious extremists.

Furthermore, Central Asia also faces the spillover of the turmoil in Afghanistan. The Tatarstan incident underscores the commonality of interests between Russia and the Central Asian states with regard to regional security and stability.

Then, there is the ‘big picture’. The rise of Wahhabism and Salafism in parts of Russia and Central Asia or Afghanistan cannot be seen in isolation. These are stirrings that are part of the massive upheaval unfolding in the so-called Greater Middle East stretching from the Levant to the borders of China.

The point is, we are only at the beginning of the upheaval. Much will now depend on what happens in Syria, where we are witnessing the use of Wahhabism and Salafism as geopolitical instruments by regional states such as Saudi Arabia and Qatar. For reasons of political expediency, the West is turning a blind eye to what is going on. The United States’ estimation seems to be that the Wahhabist and Salafist surge can be tempered once the political agenda is fulfilled. But it may prove a dangerous miscalculation, as the Afghan tragedy testifies.

Besides, Wahhabism and Salafism also have a life force of their own and it is well-nigh beyond the capacity of anyone – even a superpower – to harness it, fine-tune it and then to discard it at sweet will once the political agenda has been fulfilled.