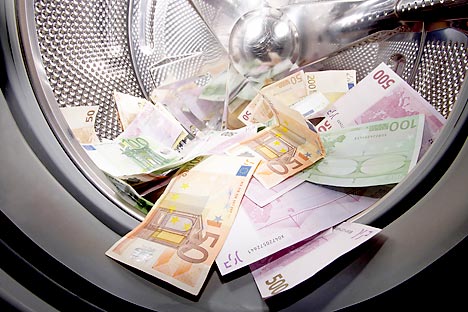 The dubious working of the banking system. Source: PhotoXPress

With great power comes great irresponsibility. That seems to be the motto of a bunch of freebooting London bankers who are gaming global interest rates. The Libor scandal that dwarfs every other financial scam in history could have only happened in Britain.

One of the greatest thinkers of the modern era was a convicted felon. On April 17, 1621 Francis Bacon, the English philosopher, statesman, scientist and author, was fined £40,000. What was his crime? The lord chancellor, who was responsible for the efficient functioning and independence of the courts, had accepted bribes from litigants.

In 1837 when Benjamin Disraeli got elected to parliament, a lawyer from his constituency accused the future British prime minister of bribing his way to power. It was embarrassing no doubt but the accusation was the least of his worries. “His electors did not mind the first charge. They lived on bribes,” writes biographer Robert Blake. Disraeli’s real crime was that he had promised the lawyer a bribe and not paid – that was a much more serious matter.

Bribery was widespread in Britain and Disraeli had nothing against it per se. He was just too cheap to pay up. In fact, in 1841 he dumped his original constituency and chose a cheaper seat with fewer voters requiring fewer bribes.

Corruption has always been part of British life although the British deluded by their sense of entitlement have portrayed the foreigner as immoral while depicting the Briton as bearing the burden of honesty.

Virtually every British civil servant in India had at least one hand in the till. Governor generals Robert Clive and Warren Hastings were both accused of massive theft. In 1757, Clive received a quarter of a million pounds (an astronomical amount of money in those days) as reward for winning Bengal for the British. That bounty apparently wasn’t enough and he proceeded to steal millions more from the Indians. At his trial Clive said, with cutting chutzpah, that considering the wealth he had seen in India, he was astounded at his own moderation at not taking more.

This penchant for greed is indulgently corroborated by the influential Scottish philosopher and imperialist David Hume in his six-volume History of England: “The British conquerors in India directed their pursuits to one object exclusively, the acquisition of money. They considered in every transaction of war, peace or alliance what money could be drawn from the inhabitants....They pillaged not with the ferocity of soldiers but with the cool exactness of debtor and creditor....Before they planned aggression, they calculated the probable proceeds, the debts they might extinguish. They considered war with the natives merely a commercial adventure: by so much risk encountered a certain quantity of blood spilt, and a certain extent of territory desolated, great sums were to be gained.....The sufferings of India attached no blame to the nation.”

This culture of unbridled corruption is the incubator of Libor or the London Inter-Bank Offered Rate. Libor affects everyone that participates in the global economy as it is used to set the interest rate for a wide range of financial products, including car loans, credit cards, mutual funds, mortgages, bonds, derivatives and student loans.

Let’s look at the gallery of rogues who participate in this exercise. Libor has its roots in the October 1984 partnership between the British Banking Association and various financial institutions, including the Bank of England (Britain’s central bank), Royal Bank of Scotland, JP Morgan Chase, HSBC and Bank of America. In total it has 18 member banks.

The rate is calculated and published at 11am each day in London by Reuters after these member banks submit their valuation for that day. The top and bottom rates submitted are discarded and the average of the middle is your Libor.

It starts looking like ‘quantum economics’ now. The rate is not based on any objective mathematical formula or market trends. No government regulator oversees this mechanism at any stage. It is solely based on a gentleman’s agreement but as we have seen, even gentlemen like Bacon and Disraeli were crooked.

US House Representatives member Dennis Kucinich (D-Ohio), one of the few honest politicians left in America, explains on his Congressional website that Libor is an estimate of the interest rate the British Banking Association members think they would pay if they sought to borrow from another bank.

Yeah, think is the operative word here. That’s how arbitrary and fuzzy the system is. “The evidence so far is that one arm of a bank responding to the Libor poll would change their number based on what another arm of the same bank wanted – and that other arm could consist of the bank’s traders who make their money on whether the rate goes up or down,” writes Kucinich.

In fact, most big banks have ceased to be places where you deposit your money, and the money is in turn loaned to someone else. They really don’t care for your measly savings. Bonds are the sexed up instruments that bring in the big bucks. As long as the banks are able to keep selling high-value bonds, their balance sheets look healthy – or healthier than they really are.

Let’s look at your balance sheet. If you have mutual funds, you have clearly lost value. Got bank deposits? You have lost out on interest income. (This is the reason for the growing poverty among retirees in the West, who were counting on interest income on their retirement savings.) Are you a bond holder? Well, be very afraid because the bond market rests on goodwill and without that key ingredient it will turn volatile just like day follows night. Basically, in any scenario you lose and the banks win.

Think about it – trillions of dollars worth of people’s savings and future earnings rest on the whim of some cocaine sniffing financial executive sitting in an office in the heart of London’s CBD. Currently, there is more than $800 trillion in financial products riding on Libor. That’s 10 times the size of the world’s GDP. It means hundreds of millions of homeowners, investors and businesses have been paying the wrong interest rate. If the rates were gamed by say, 0.01 percent, the total losses would be in the region of $800 billion, or two and a half times the GDP of Greece.

That, by the way, is just a one-time loss. Preliminary inquiries suggest banks may have been manipulating Libor rates for years.

Government: Working for the banks

If there’s anything good coming out of this episode, it is that Barclay’s Bank, the poster child of this scam, isn’t going down alone. It has been singing like a canary and fingered the Bank of England as the brains behind the interest rate manipulation scheme. This also implies that every other bank was doing the same thing because essentially the government was telling Barclay’s that it needed to get in line with the other banks. Britain, like America, has chosen the big banks over the little guy. It can mean only one thing – British banks and financial institutions are in trouble.

All that glitters isn’t gold

The CEO of the Bank of England, in a bid to make his crime look less appalling, said in his testimony that other self-certifying markets such as gold, oil and minerals are also gamed. Since he has zero credibility, one can’t really be sure. But then until last month, who would have guessed Libor was fixed?

There is also the very real possibility that governments are inaccurately reporting such fundamental indicators as unemployment, inflation and GDP figures. For instance, the US has been reporting a jobless rate of around 8.1 percent, also called the “propaganda rate”. But the rate is more like 11.6 percent when you factor in monthly population growth. And if you include people who have stopped looking for jobs and dropped out of the market after months or years of fruitless job search, that figure could well be close to 17 percent.

Similarly, in Canada the government reports a jobless rate of 7.3 percent but the Canadian Auto Workers union says it’s over 12 percent.

Western market manipulators, helped by a wink and a nod from their governments, have pumped financial toxin into the international markets. What they have accomplished is erode trust, the vital grease that works the engine of the global economy. Around the world as people keep getting burnt by scams, they pull back from the economy; they invest less and spend less, thereby slowing down the engine further.

This cunningly contrived system of institutionalised loot needs to be taken down immediately. Like American and Russian weapons inspectors keeping tabs on the number of strategic missiles and nuclear bombs, we need economic inspectors from various countries keeping 24-hour vigil on global financial hubs.

With Britain home to 80 percent of Europe’s finance industry, France and Germany have proposed a number of regulations, market reforms and a tax on financial transactions that are designed to detach London’s hand from Europe’s cash spigot. But if such reforms are delayed, the sensible thing for emerging countries would be to cut adrift and move away from the mess.

Hopefully, after these revelations the Western media will stop their incessant carping about corruption in places like Russia, China and India. Because frankly, nobody is listening any more.