Steeling themselves for the future 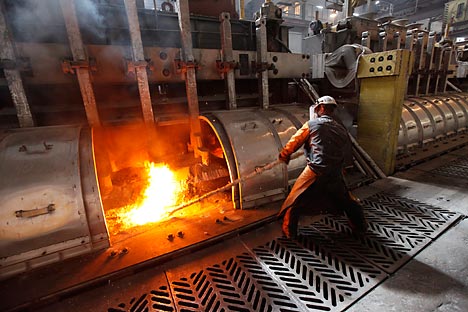 Russia’s steel lobby suggests negotiations to head off any potential difficulties that might arise once Russia joins the WTO.

Russian steel producers, who were among those expected to benefit most from Russia’s accession to the WTO have now discovered that membership in the global trade body may have some drawbacks. The steelmakers are complaining that rising utilities rates and raw materials prices have eroded their competitive advantages in recent years, and now they fear that imports will dominate. They also expect to be the target of a growing number of anti-dumping investigations. In order to avoid this, the steelmakers are proposing talks with the United States and the European Union on measures to avert trade disputes.

Vladimir Lisin, president of the industry trade group Russian Steel indicated in a report to a recent conference in Magnitogorsk that the steelmakers anticipate tough competition, anti-dumping investigations, and a reduction in steel exports and raw materials consumption.

For a long time, the Russian metals industry treated accession to the WTO like the Holy Grail because they believed that joining would enable them to improve their position in the international market. As it turns out, however, Russian steelmakers, who earlier could boast of practically the highest profit rates in the world, are far from unassailable today. Lisin’s presentation noted, for example, that the average profit rate in the industry has dropped from 29 percent to 12 percent since 2007. The cost of production has increased by a factor of 5.6 since 2001, while steel prices climbed by a factor of only 3.9. “In the coming years,” Lisin stated in his report, “the profitability of Russian metal production will be on a par with or worse than that of its competitors.”

The falling rate of profit is primarily connected with the steady rise of rates for natural gas, electric power, and rail transport. Data from steel companies show that Russian gas and electricity prices have caught up, and in some cases even surpassed, those of their competitors. For example, in the United States, 1 kWh costs 5.4 cents, compared with 6.6 cents in the metals-rich Urals Federal District. In the Central Federal District, 1 kWh of electricity costs Russian companies 8 cents, which is only 7/10 of a cent cheaper than in Belgium. Russian gas prices have also caught up to those in the United States: the cost per tcm is $119 in both countries. Gas prices have been declining in the United States and Europe during the past few years, while prices in Russian continue to rise.

The steelmakers believe that the new trade rules that will come into effect after WTO accession may have adverse effects on the Russian steel industry, in view of the declining profit rates. Repeal of the existing agreement with the EU represents a threat to 2.5 million tons of Russian exports, while another 300,000 tons may be affected by revision of the agreement limiting deliveries of hot-rolled steel from the United States, explains Russian Steel. The steelmakers are also troubled by a possible drop in Russian domestic steel consumption due to of increased competition from imports.

To protect themselves from possible anti-dumping measures on the part of steel-importing companies, the steelmakers propose replacing the existing Russia-EU agreements on steel with a bilateral early-warning system for trade disputes. They also want negotiations with the United States to prevent a deterioration of the terms of export to that country. At the same time, they want to defend the Russian market against imports at dumping prices by using certain protectionist measures.

It is unknown if the steel producers’ proposals have met with any sympathy in official circles. Alexei Portansky, director of the Information Bureau on Russia’s Accession to the WTO, believes the steelmakers are overdramatizing the situation. “Of course the proposals from the steel companies need to be carefully analyzed, but anti-dumping investigations are a routine matter. They take place between all European countries, without exception, and the United States, and they don’t always result in the imposition of duties,” Portansky commented. Furthermore, Russian steel companies are among those least impacted by the changes that WTO accession will bring, because they already have a long-standing and extensive presence abroad. Anti-dumping measures against Russian companies are inevitable if some market player objects to something. The Russia-EU trade agreement on steel, Portansky points out, guarantees that protectionist measures will not be applied to Russian exports.

Oleg Dushin of the Zerich Investment Company believes that the steel industry shouldn’t fear WTO accession, adding that consumers of steel, especially the Russian machine-building industry, face a greater threat. Dushin also warns that the steel producers’ relations with the United States may not turn out as they hope. The U.S. is especially zealous in defending its market against unwanted importers, he said.

The text has been abridged from the original. The complete story in Russian can be read in the RBC Daily website.