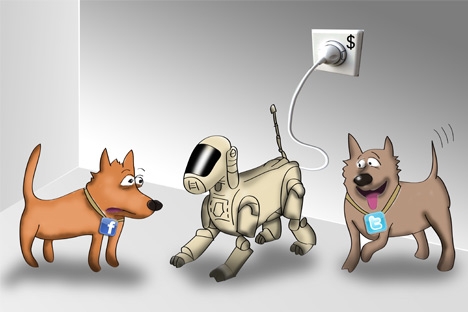 The adoption of the amendments to the NGOs law classifying some NGOs that receive funding from abroad as “foreign agents”could have consequences that neither the president nor the NGOs anticipate, namely, development of civil society in the country.

A couple of years ago, I happened to attend a semi-closed forum of donors – organizations that finance non-commercial civil projects in Austria. Let me make it clear right from the start that Russia was not discussed. American and European funds were discussing ways to support civil initiatives primarily in the United States and Europe.

The main problem facing the donor funds, noted experts at the conference, was the rapid worldwide growth of network civil projects – projects initiated and driven not by traditional NGOs but by Internet communities that spring up to address specific issues and disappear once the issue is resolved.

The headache for European and American donors was that they did not see how they could support these network civil initiatives for several reasons. First, it is totally unclear to whom money is to be physically given. Second, it is not clear how to monitor the spending of that money. Third, it is not reasonable to expect a network community to come up with a coherent report on the project.

The discussion at that conference recently came to mind as I was following the debate over Russia’s NGO law.

Up until now, most civil projects in Russia have, indeed, been financed by foreign foundations. As a result of the updated law, the supply of foreign donations will be virtually shut off. According to the language of the law, any organization that has received a foreign grant can be held accountable. Moreover, the financial outlays involved in keeping the accounts stipulated under the new law will be so great as to make it meaningless for Russian NGOs to attract foreign funding for their projects.

Some NGOs will close down. Some will manage to find Russian money. Some, afraid of being dragged into a court, will balance in the “gray” zone, trying to stay clear of the law.

In parallel, thanks largely to the new restrictions, the number of network civil initiatives will grow, such as#OccupyAbay or #DobryLager (#KindCamp). These initiatives will be financed by the crowd-funding method, which is already being used by initiatives supported by Alexei Navalny’s projects. The state would be at a loss about how to cope with such initiatives. You cannot regulate them through legislation. Foreign funds will, over time, learn to work with individuals and will launch micro-grant programs to support the activities of individuals, not NGOs.

The net effect of all this might be to make Russian civil society more vibrant and part of the world trend for traditional NGOs to make way for civil network projects.

The new Russian legislation will merely accelerate the onset of this trend in Russia. And the Internet will become a veritable “network of agents,” to use an idiom familiar to the authors of the updated version of the law on NGOs.

Rostislav Vylegzhanin is a political columnist for Moskovskiye Novosti newspaper.