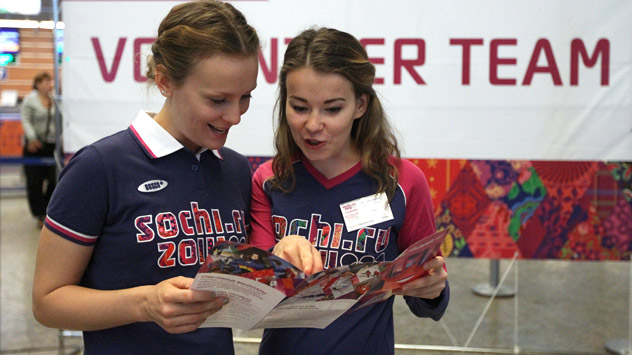 The Russian Foreign Ministry has expressed concern that not all Russian volunteers have been granted British visas to work at the London Olympics.

The Russian Foreign Ministry said on Tuesday that the British authorities were delaying in issuing visas to Sochi-2014 Organizing Committee volunteers to work at the Russian Hospitality House at the London Olympics. The British Embassy in Moscow said they are trying to settle all the issues as fast as possible.

Russian Foreign Ministry spokesman Alexander Lukashevich declared on Tuesday that the Russian volunteers heading for the London Olympics were not able to obtain British visas in a timely manner.

“Although the documents were filed in time, the British side is delaying in issuing visas to the volunteers of the Sochi-2014 Organizing Committee who are to take part in organizing and running the Russian hospitality house called Russia.Sochi.Park at the London Summer Olympics that open this week. The situation gives cause for legitimate concern because it effectively disrupts implementation of the Russian project,” Lukashevich said in a statement.

“We are in close contact over the issue with the British representatives both in Moscow and London, who, however, invoked bureaucratic formalities,” he added.

“We hope that the British authorities, as the hosts of the Olympiad responsible for organizing the events, will resolve the issue and the Russians will receive the requested visas. That would undoubtedly be in the interests of forming a favorable background around this major sporting event,” the Foreign Ministry spokesman said.

“We have already issued hundreds of visas and are still considering the remaining applications. We expect the majority of visas to be issued later today,” Shaw continued. “All the applications are considered in accordance with our immigration laws.”

Russian presence at the games, past and present

The 30th Summer Olympics will be held in London from July 27 to August 12. The Russian delegation at the opening ceremonies is expected to be led by Prime Minister Dmitry Medvedev, while Putin will later arrive on a private visit to watch the judo competition, sources said.

Russia will be represented at the Summer Olympics by 104 volunteers, RIA Novosti reported. They candidates selected faced fierce competition and are from all over Russia. The volunteers work as interpreters and escort Russian athletes.

During the Vancouver Winter Olympics in 2010, the buzz around the Russian delegation had less to do with sporting achievements, which turned out to be pretty modest (15 medals instead of the anticipated 30-50) than with the raucous evening parties at which alcohol flowed freely. Eyewitnesses said that, at a party thrown by a major Russian fuel company, whiskey and vodka poured from improvised “petrol pumps” set up in the reception room.

This year, the Russian authorities, mindful of the experience, imposed a ban on alcohol for the athletes and other members of the Russian team at the London Olympics. The ban on parties with alcohol organized by the Russian hospitality houses covers the Russian Olympic Committee, the Sochi-2014 Organizing Committee, the All-Russia Summer Olympic Sports Association (VALOVS) and Mikhail Kusnirovich’s company Bosco di Ciliegi, which provides equipment for the Russian team, Kommersant reported.