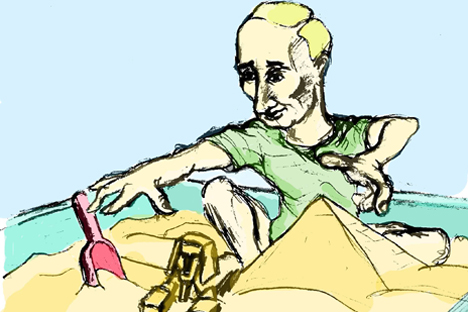 Putin chose to underline Moscow’s desire to “strengthen” the bilateral relations between Russia and Egypt and to forge a “constructive partnership and close cooperation” on regional issues with Mursi, which would have “great importance for ensuring stability and security in the Middle East.”

With the space of three weeks, Russian President Vladimir Putin communicated twice with Egyptian President Muhammed Mursi. This is dense traffic. It underscores Moscow’s keenness to foster ties with the new leadership in Cairo.

The implications of Muslim Brotherhood’s rise to power in Egypt are still sinking in. But it is important to engage Mursi. Even as his presidency commences, it has come under strong outside influence. For sure, Egypt is aspiring to reclaim its leadership role in the Middle East after the long period of hibernation under Hosni Mubarak, who lived cozily under the American umbrella, holding the hands of Israel.

Unsurprisingly, there is an air of expectation, given the acuteness of the Middle Eastern question, and any whichever stance Egypt takes on a host of current issues is bound to reverberate – Palestine problem and Arab-Israeli ties, peace treaty with Israel, stance on the hotbeds of current upheaval (Syria, Yemen or Bahrain), ties with Saudi Arabia and Iran – and significantly impact regional politics.

The great powers are watching closely and are preparing to work with Mursi – the United States first and foremost. President Barack Obama telephoned Mursi; thereafter, wrote a letter and had it hand-delivered to him in Cairo by US deputy secretary of state William Burns; and invited Mursi to visit Washington in September despite the presidential campaign in the US coasting toward high noon by that time of the year. Secretary of State Hillary Clinton met Mursi last week in Cairo in what seems to have been a complicated exercise to exorcise the past in the US-Egypt relations and to turn a new page – an exercise that met with strange (albeit not unexpected) results, according to some accounts.

In comparison with the US predicament, Russia has fared well. For one thing, it is not carrying any baggage of the Mubarak era, for which it needs to make amends or render apology. The opportunity opens up to deal with the new leadership on a ‘clean slate’. Russia’s diplomatic challenge is to commence a discourse with the new leadership over the current developments as quickly as possible, given the torrential flow of day-to-day events. Equally, Russia’s ties with Egypt languished during the Mubarak era and are far below their potential; they need revamping.

Putin telephoned Mursi no sooner than the cloud of uncertainty lifted and it became apparent that the latter was the winner in the closely-fought presidential race. While acknowledging that Mursi’s priority lies in Egypt’s political economy, Putin also discussed regional and international issues, “including the situation in Syria.” Putin’s decision to call Mursi was a political gesture of reaching out, which resulted in a substantive exchange.

But Putin’s message of greeting to Mursi on Monday falls in a different category. The occasion is the 60th anniversary of the July Revolution in Egypt, which brought Gamel Abdel-Nasser to power. It is an intriguing occasion from today’s perspective – both for Moscow and for Cairo.

The July Revolution epitomized the surge of Egyptian (and Arab) nationalism – and indeed pan-Arabism in general. It was also a landmark event in Third World national liberation. It is in many ways a poignant memory for all Egyptians today, given the regression the country went through for the past 3 decades since the 1979 Camp David Accords and the resultant national humiliation the nation went through for over a generation. The 2011 uprising on Tahrir Square evoked the “hopes and commitments” of the 1952 revolution, as Nasser’s granddaughter poignantly recaptures in an article in Al-Ahram.

Egypt’s Brothers, however, had a troubled experience with Nasser and that slice of history is yet to be assimilated by them, as Mursi’s anniversary speech yesterday on the Egyptian television showed. Mursi gave credit to the July Revolution for “creating Egypt’s First Republic,” but couldn’t overlook that Nasser was harsh toward the Brothers (“failed to achieve democracy”).

Arguably, Brothers’ dilemma is that they inherit the torch of Nasserism in many areas – social justice and egalitarianism, resistance, national independence, and so on. Yet, they have some unfinished business with Nasserism. Clearly, Mursi is under compulsion to identify with the prevailing Egyptian national mood, which, cutting across politics and society hails the ideals of the1952 Revolution – including, ironically, Ahmed Shafiq, former prime minister under Mubarak who was also Mursi’s opponent in the presidential election runoff in June.

All things taken into account, therefore, Putin’s message to Mursi is suffused with meaning and much symbolism. Putin chose to underline Moscow’s desire to “strengthen” the bilateral relations between Russia and Egypt and to forge a “constructive partnership and close cooperation” on regional issues with Mursi, which would have “great importance for ensuring stability and security in the Middle East.”

The point is, Muslim Brotherhood is at a crossroads. What will be of utmost consequence in the immediate terms is the stance that Egypt adopts toward the Syrian situation. On one plane, it seems that the Brothers in Syria, who are being mentored by Saudi Arabia, Qatar and Turkey – and some would say, by the Israeli intelligence as well – are the progenies of Egypt’s Muslim Brotherhood.

But that is by far simplifying a highly complicated matrix. Saudi Arabia has cracked down on Egypt’s Brothers in the past and openly supported Mubarak’s repressive rule. Riyadh is throwing money at Cairo with the hope that money can buy everything, but is keeping fingers crossed about Mursi.

The impulses that Putin underscored in his message to Mursi were characteristic of Russia’s relations with Nasser’s Egypt. The message underscores that Moscow sizes up the undercurrents and welcomes Egypt’s return to the leadership of the Arab world. From Moscow’s viewpoint, Egypt’s return to reclaim its legacy in regional politics can only strengthen the Arab people’s deep yearning for national independence and liberation from the Western hegemony.

It is unlikely Obama would felicitate the Egyptian nation on the occasion of the 60thanniversary of the July Revolution. Russia seems on the “right side of history,” after all.