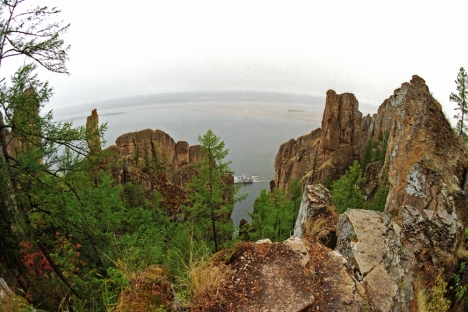 The UNESCO World Heritage Committee held its 36th Session in St Petersburg, where heated discussions concerning Russia's "Venice of the North" were upstaged by Yakutia's beauty.

Russia hosted the UNESCO World Heritage Committee’s 36th session in St Petersburg this month for the first time since its inception. This year, the committee placed Russia’s Lena Pillars Nature Park on its internationally significant World Heritage list, underscoring the importance of protecting the site of breathtakingly beautiful rock formations that spike along the Lena River in eastern Siberia.

But the hottest discussion at the forum zeroed in on the historic center of St Petersburg, including the proposed construction of the Lahta Center tower there.

UNESCO representatives were expected to bring to a close the five-year discussion on the revision of borders and “universal global value” criteria of the “Historic Center of St Petersburg and Related Groups of Monuments,” the largest site on the World Heritage List, often called the Venice of the North. However, the Russian Federation had failed to deliver a report on implementation of UNESCO recommendations and the discussion was again postponed from 2012 to 2014.

The city’s architects and preservationists had hoped that UNESCO experts would evaluate the conditions in St Petersburg on the spot and publicly voice their opinion on such matters as the outcome of the Summer Garden conservation and the proposed 500-meter tower for Gazprom’s Lahta Center, approved by City Hall. Advocates also wanted to hear an UNESCO opinion on large-scale plans for the gentrification of St Petersburg’s historic neighborhoods.

A total of five natural and 20 cultural sites were added in 2012, as well as one natural and cultural site. The UNESCO World Heritage List now includes 962 sites. The number of countries with sites on the list rose to 157 this year, after Chad, Congo, Palau and Palestine had sites listed for the first time. The Committee has also added five sites to UNESCO’s List of World Heritage in Danger, including Timbuktu and the Tomb of Askia (Mali); the Birthplace of Jesus; Church of the Nativity and the Pilgrimage Route; Bethlehem (Palestine); the Fortifications on the Caribbean Side of Panama: Portobelo-San Lorenzo (Panama), and Liverpool Maritime Mercantile City (United Kingdom).

However Eleonora Mitrofanova, the head of the World Heritage Committee, demurred. “The session won’t discuss matters concerning the host country’s sites,” she said.

As part of the 36th session, UNESCO established a task force for updating the World Heritage Convention, which will turn 40 this year. When the convention was adopted in 1972, dozens of sites needed protection. Now that protected sites number in the thousands, the convention needs to be amended.

Meanwhile, Grigory Ordzhonikidze, executive secretary of the Russian Federation UNESCO Commission, celebrated the inclusion of Lena Pillars on the World Heritage List after more than six years of deliberations.

Lena Pillars is a geological formation and nature park in Russia, on the bank of the Lena River. It is situated in Yakutia’s Khangalassky region at a distance of about 65 miles from the town of Pokrovsk. Lena Pillars is marked by miles of spectacular vertical rock pillars piled along the banks of the Lena, whose deep valley cuts through the Lena Plateau.

To some disappointment, UNESCO Committee members declined the nomination of the Astrakhan, Pskov, and Uglich Kremlin ensembles after experts failed to come to a common understanding concerning those sites.

Members of the committee said they were particularly concerned about the fate of the Golden Mountains of Altai, consisting of five separate zones – the Altaisky and Katunsky Nature Reserves, the Ukok Quiet Zone, Lake Teletskoye, and Mount Belukha. Experts worry about the construction of the Altai gas pipeline across the Ukok plateau. “If the construction goes ahead, the site will be seriously damaged. The committee will then be forced to add it to the List of World Heritage in Danger,” Grigory Ordzhonikidze said.