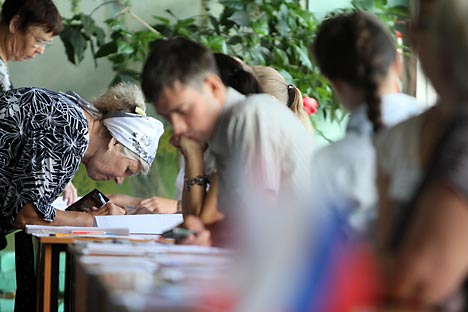 A new law on election monitors provokes debate among experts

The elections to the local duma of the small town of Kasimov in the Ryazan Region has unexpectedly became a topic of discussion at the federal level. The unprecedented number of observers at the latest round of elections and their aggressive behavior caused Leonid Ivlev, deputy chairman of the Central Election Commission to put forward an initiative that will require observers to notify election commissions of their wish to observe in advance. Experts have had mixed reactions to the proposal.

Alexei Chesnakov, a member of the Kasimov town duma and an official in the United Russia party supports the initiative. “The proposition is absolutely logical. There can be over 50-60 observers at one and the same voting office with the increase in the number of registered parties. It is obvious that it is impossible to provide observers with proper conditions for the adequate assessment of the process when the area of the office is often 25-30 square meters,” Chesnakov said. “It is necessary not only to fix a deadline for filing applications for observation, but also to create a mechanism of training observers and members of election commissions, and probably even the officers of law enforcement agencies who often do not understand how they should react to claims about violations.”

However, lawyer Dmitry Kachanov views the proposal as another attempt by the government to control the election process. “The statement made by Mr. Ivlev could be called not adequate enough, but the thing is that it corresponds to the existing political situation in the country quite well. If authorities dislike something about the opposition’s activities, they promptly prepare a straightjacket in the form of corresponding legislative amendments,” Kachanov said. “However, in this situation the absurdity of the Ivlev’s statement consists in the fact that the punitive initiative comes from the service whose aim is direct control over the honesty and adequacy of elections. Nonetheless, it seems that public observers are bothering the state observers monitoring the legitimacy of elections held in the country so much that the latter see no other way of escaping from the public control over their activities, except for using a corresponding legislative ‘disguise.’”

Rotislav Turovsky, vice president of the Center for Political Technologies also sees the issue as one of control.  “The problem is rooted in the Central Election Commission’s desire to regulate the work of observers and thus restrict the possibilities of participating in regional and municipal elections for visiting observers. Since they are oppositional observers at the same time, the purpose is to restrict the participation of oppositional visiting observers in any elections or make it virtually impossible,” Turovsky said.

Political analyst Dmitry Oreshkin sees something even more sinister in the law. “According to the law text, the entire composition of the election commission, including its members with a consultative vote, will be formed once every five years. It kills the very idea of independent election observation. It excludes a possibility of observers’ migration. The situation is close to serfdom when peasants were ‘anchored’ to a land plot. Similarly, now observers will be ‘anchored’ to an electoral district,” Oreshkin said.

But Leonid Polyakov, deputy dean of the faculty of politics at the School of Business Administration, sees some validity in the proposal. “On the one hand, observers guarantee the purity, transparency and honesty of elections, but on the other hand, they become active participants of this process by interfering in the election process and trying to influence the election commission one way or another. Therefore, it is very important that the form of observer’s participation should be very strictly regulated in the legislation,” said Polyakov.

Liliya Shibanova, the executive director of the Golos Association, may have the most balanced view. “What Ivlev proposes now is, in fact, additional observer registration terms and conditions. Two weeks prior to the elections and tightening the requirements testifies to the fact that our election commission wants to virtually close any possibility of participation for active groups. Of course, they will not be registered two weeks prior to the elections. This step is meant to cut off those people who are professionally ready to be observers,” Shibanova told Interfax.