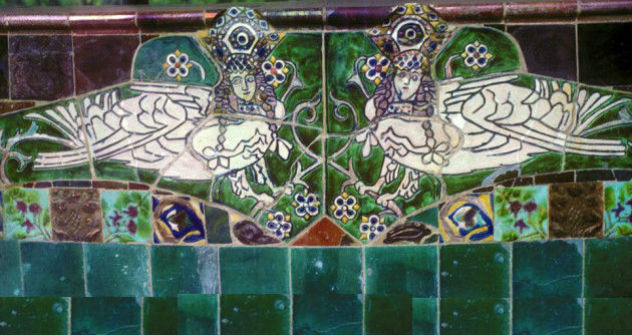 The Abramtsevo estate outside of Moscow was a 19th century center of creativity and remains an interesting destination for tourists.

Among the surviving country estates in the Moscow region, perhaps the most famous is Abramtsevo, located some 30 miles northeast of Moscow on the way to Sergiev Posad. Abramtsevo is not known for its palatial structures, but for the beauty of its forest setting and its deep connections with Russian culture.

Although the area was inhabited as early as the 17th century, its intellectual significance dates from 1843, when the estate was acquired by Sergei Aksakov (1791-1859), a leading figure in an intellectual group known as the Slavophiles. During the mid-19th century, Aksakov’s legendary hospitality was extended to a number of cultural luminaries, including the writers Nikolai Gogol and Ivan Turgenev. The main house, a long log structure covered with plank siding, has preserved its general form much as Aksakov acquired it. The interior, however, has many displays devoted to the next phase in the life of the estate.

In 1870, Abramtsevo was sold to Savva Mamontov (1841-1918), son of pioneering Moscow industrialist Ivan Mamontov. Like his father, Savva became a leading developer of Russian railroads, but he also discovered an interest in the arts and in traditional Russian culture. With the purchase of Abramtsevo, then in dilapidated condition, Mamontov and his wife Elizabeth had not only a bucolic retreat from Moscow, but also a setting in which they could gather a group dedicated to the revival of the arts and crafts. Although Abramtsevo would be rivaled by the artistic center at the Talashkino estate of Princess Maria Tenisheva, Mamontov's group was unique in its breadth of artistic interests and its influence on architecture and design at the turn of the century.

Among the first artists to work at Abramtsevo in the early 1870s were Viktor Hartmann and Ivan Ropet, leading proponents of the “Russian Revival” style in architectural design. Before his death in 1873, Hartmann built the Abramtsevo studio with richly carved wooden decorations typical of the crafts revival. Today the studio serves as a museum of the innovative ceramic designs created at Abramtsevo. Nearby is the Ropet's log bathhouse, shaped like a Russian fairytale structure known as a “teremok” which united asymmetrical decorative components that would become a feature of innovative architecture at the turn of the 20th century.

One of the most active participants of the Abramtsevo group was Elena Polenova (1850-1898), sister of the painter Vasily Polenov. In 1882, she established the furniture and woodworking shop, which used peasant crafts traditions and encouraged the continuation of those traditions in the education of village children. Polenova’s most productive enterprise, however, was the ceramics workshop, which started modestly, but became a remarkable force in design and architecture in Moscow after 1889. For example, Polenova was able to draw on the talent of the visionary artist Mikhail Vrubel, whose ceramic designs are preserved in tile stoves inside the estate house at Abramtsevo, as well as in the Hartmann studio. Nearby under a glass canopy is a ceramic bench in which Vrubel combined mythic motifs in a fantasy design.

These varied creative elements came together in the design and construction of a small church at Abramtsevo estate. Although the Khotkov Monastery was less than two miles away, frequent floods around Easter convinced Mamontov to build a church on the estate grounds. The communal effort in building the church, dedicated to the icon of the savior not created by human hands, has become legendary in Russian art history. It was the realization of an artistic synthesis by a group dedicated to preserving art in the spiritual life of the people. Indeed, the church was an amateur production, unconstrained by committees, academic rules, or complex engineering methods.

Initial sketches by Vasily Polenov for the church design drew on the architecture of early medieval Novgorod. Other elements, including those of 12th-century Vladimir, were incorporated into the painter Viktor Vasnetsov's reworking of the design into an architectural project that emphasized structural clarity and the relation between material and form. Vasnetsov, a painter of historical and semi-mythical subjects from the Russian past, integrated these elements into a small jewel of a structure, constructed in 1881–1882 with exaggerated contours and a large curved segmented window on the south wall.

The decoration of the interior and the design of the furnishings involved not only Polenov and Vasnetsov but also the painters Ilya Repin and Apollonary Vasnetsov (Viktor's brother), the sculptor Mark Antokolsky, and Elizabeth Mamontova, who participated actively in the Abramtsevo crafts circle. The communal spirit at Abramtsevo transcended professional divisions in the search for aesthetic harmony.

The Abramtsevo workshops were part of that unity, with each craft contributing to the furnishings and decoration of the church. Especially notable are the ceramic tiles, both on the inside (on the traditional Russian stove) and the outside in ornamental strips beneath the cupola. Ten years after the church was completed, Vasnetsov added a burial chapel on the north façade. Savva Mamontov was buried there in 1918. This addition was also exquisitely decorated with Abramtsevo tiles. The Savior Church, with its inspired union of structure, function, and material, was a pioneering expression of the link between tradition and modernity in Russian architecture.

The creativity of the Abramtsevo community reflected a broader cultural tendency that emphasized both the aesthetic and spiritual realms. This cultural revival stimulated an interrelation between the arts characteristic of so many of Abramtsevo’s activities – not just the crafts, visual arts, and architecture but also drama, music, and set design. Participants in the estate's amateur productions, for example, included the renowned opera singer Fyodor Chaliapin and the director Konstantin Stanislavsky. One of the most notable cultural events at Abramtsevo occurred in 1886, when Nikolai Rimsky-Korsakov's opera “The Snow Maiden” was produced with set designs by the artists.

In addition to the central buildings, visitors to the estate can also see architectural fantasies such as the “Hut on Chicken Legs,” created by Viktor Vasnetsov in 1883, as well as the Polenov dacha. All of this is set within an idyllic forest landscape overlooking the small Vorya River. Despite the appealing modesty of its scale, the museum ensemble on the estate is a reminder of the enduring legacy of Abramtsevo in Russia’s artistic culture.