Would you like some boiled language as a starter? 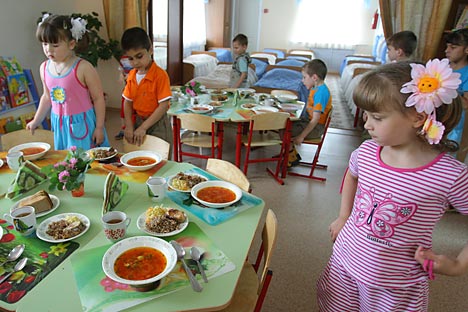 “Pervoe” is the first course of the Russian cuisine, which is soup (borsch) and nothing else.Source: ITAR-TASS

Moscow’s eateries offer anything you may desire, consume and afford. But it is still a real challenge for a foreigner to navigate through multipage menus, even in English.

{***Would you like some boiled language as a starter?***}

Would you like some boiled cow language garnished with sweet piper for a starter? (Actually, veal tongue with bell pepper rings.) Or maybe you prefer poor salted salmon? (In fact, these tender fish slices are mild-cured.) Perhaps you can afford crab phalanges? (Don’t be afraid, these deliciously cooked arthropod’s legs have nothing to do with Spanish fascists of the last century.)

These are real meal descriptions from real menus of restaurants and cafes in Moscow. They show the English language on a Russian tongue. Both “language” and “tongue” are translated into Russian as “yazyk,” that’s why they sometimes offer “boiled language.” It is usually served with “dick” which is not of what you just thought, but “sharp” horseradish sauce.

Now that we have finished with “zakuski” (this word means much more than starters, appetizers, snacks and refreshments – see the glossary below,) let us order “pervoe” – the first course of the Russian cuisine, which is soup and nothing else.

Do not miss white-mushroom soup. It is made of noble boletus edulis (porcini mushrooms in fine Italian cuisine, nicknamed penny buns in England for their brownish caps.) What about oxalic borsch? Sounds like something chemical? But it does smell good. This Russian soup is made of fresh sorrel, which, naturally, contains oxalic acid. Add some acified (sour) cream to your borsch and enjoy.

“Hot dishes” menu section does not necessarily mean that all main courses listed there are “sharp” as horseradish. It means just that you are going to select “goryachee” (hot-cooked) or “vtoroe” (second) course.

If you are a real flesh eater do not hesitate - order punishment lamb. The poor animal was neither punished, nor punished anybody in its life. This rack (“kare” which sounds almost like “kara” – “punishment” in Russian) was cooked to astonish, not punish you.

Now, anti-smoking advocates, beware! Here comes “Chicken tobacco” in the “Birds” (poultry) section. Don’t worry, I’m kidding. There will be no tobacco for barnyard fowl on your plate. Presumably, there should have been tawaka, a frying pan with a heavy lead used to press well-spiced chicks in the process of cooking.

If you find that sturgeon “for a couple” is offered at an apparently affordable price, don’t be confused. The Russian words for “couple” and “steam” are spelled so close that the Google translator stumbles trying to interpret them. Anyway, steamed sturgeon is worth trying. As well as “sturgeon in test” which means “breaded” since “testo” stands for “dough” in Russian.

To make your dinner complete, order “Mak” and “Vishnu” pancakes. Although it sounds like a fusion of Scottish and Indian cuisines, in fact, the stuffing of the dessert is a delicious mixture of poppy seeds (mak) and sour cherries (vishnya).

Select responsibly and have a nice meal!

Some food and drinks in the English-language menus of Russian restaurants are either presented as mere transliteration from Russian or named in a way hardly understandable for a foreigner. Hopefully, this glossary will help you avoid deplorable errors at your lunch or dinner in Moscow.

Bliny, blinchiky - Pancakes. The former are made of sponge dough.

Julienne - Hot-cooked starter made of veal, poultry or seafood.

Kharcho - Rice soup based on veal or lamb broth.

Mors - Soft drink based on berry and (or) fruit juices.

Plombir - Ice cream that (should be) really made of cream.

Sauerkraut - Almost same as you know but crunchy, if listed among starters. Otherwise see solyanka (2).

Shashlyk - Skewered meat and (or) vegetables.

Shchi - Almost any vegetable soup often based on meat or poultry broth.

Vinaigrette - Vinegar-dressed salad made of potato, beetroot and some other vegetables.