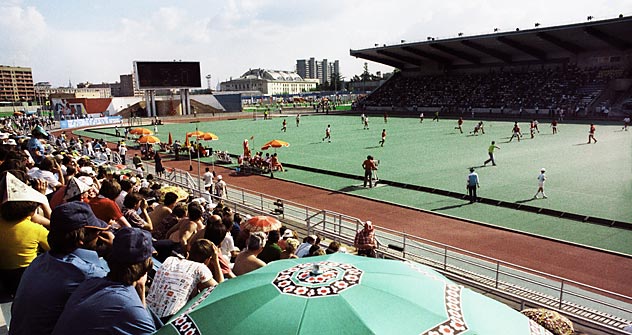 The gold medal that the Indian hockey team won in Moscow in 1980 was the last great triumph for a nation with a winning tradition in the sport that spanned decades. Source: ITAR-TASS

While the Moscow Olympics are celebrated in India for the hockey team’s gold medal winning performance, for Indians living in the Russian capital at that time, the games were all about a big makeover for the city that they still call home.

The gold medal that the Indian hockey team won in Moscow in 1980 was the last great triumph for a nation with a winning tradition in the sport that spanned decades. Many in Mumbai look back at the Moscow Olympics with a great amount of nostalgia, whereas Indians living in the Russian capital seem far removed from the sport.

There was a grand celebration on July 29, 1980 at Melroy D’Souza’s bungalow in the then-quiet Mumbai suburb of Bandra. “We waited 16 long years to win that gold medal,” says D’Souza, now 83. The octogenarian had seen Indian hockey at its best, the “golden years” as he calls the period between 1928 and 1960 when India won the field hockey gold 6 times in a row. India reclaimed the gold medal it lost to Pakistan in 1960 by winning in Tokyo in 1964, but the team wouldn’t reach another Olympic final in the next 3 editions.

“People love to discredit our 1980 team and talk about the boycott,” D’Souza says referring to the US-led boycott of the games in Moscow over the USSR’s intervention in Afghanistan. “The competition was still strong with Poland, Spain and a strong Soviet team.” D’Souza who listened to the match on All India Radio says he remembers the rainy monsoon evening in Bombay (as the city was then called) like it was yesterday. “There were 20 of us listening together and when India took a 3-0 lead, we started celebrating with rum and Campa Cola (a beverage that no longer exists).” The tremendous Spanish fight back caused a lot of anxiety among the sworn hockey fans.

“Mohammed Shaheed scored the 4th goal with 5 or 6 minutes left and then we knew it was over,” D’Souza says. There were many fans that went to the Gateway of India to celebrate the win. “It was like New Year and the celebrations were much more intense than when India won the cricket World Cup in 1983,” the octogenarian says. 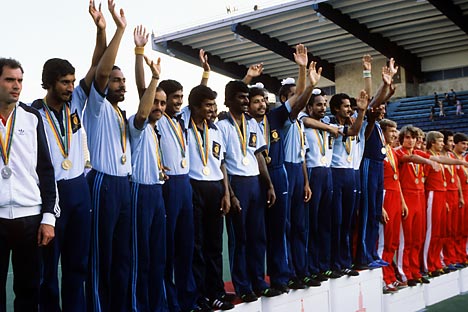 Hari Menon, a bank executive in Mumbai, lived in the state of Madhya Pradesh at the time. “People say the gold was tainted because Holland, West Germany, Pakistan and Australia didn’t play, but India did not thrash the stronger sides,” Menon says. “We were lucky to draw with Poland and that helped us stay in contention for the gold.” Menon says the hat-trick by Spanish Captain Juan Amat will be forgotten but that was one of the greatest performances in any Olympic final. “He scored that third goal very late and it was 4-3 for India...I was biting my nails till the hooter.”

Menon’s neighbours started distributing sweets and bursting firecrackers after the victory. “Hockey was THE sport then and I remember reading how thousands of people were waiting outside for the team when they came back from Moscow,” he says.

Gagandeep Shekon was one of the lucky Bombayites who were in Moscow to watch the Olympics. Shekhon, who was an official with a sports federation, loved what he saw of the Soviet capital. “It cost just 5 kopecks to take the metro and everything was so cheap in the city,” Shekhon says. He remembers the outpouring of friendship in the streets of Moscow during the games. “A Sikh in Moscow in 1980 was a novelty,” he says with a smile.

Shekhon recalls how the warm evening at the Dynamo Stadium when India defeated Spain. “All the Soviet fans were supporting India and it felt like a home match...I felt sorry for the Spanish team.”

Yogender Nagpal, a philology student in 1980, was more in awe of the makeover that the Soviet capital received as the host of the games, than the hockey competition. “The city was very beautiful and very tidy. Olympic melodies played everywhere,” Nagpal, who still lives in Moscow 32 years later, says. Nagpal has fond memories of Mishka, the Olympic Bear that was the mascot for the games. “He united people; there was no other symbol like the Soviet Olympic bear, never before and never after,” he says.

Nagpal also remembered how the weather held up for the duration of the tournament and how good the sporting infrastructure was at that time.  “The Druzhba sports hall was built for the Olympics to host the gymnastics competitions…There was a rowing channel in Moscow’s Krylatskoye region (now it’s one of the prestigious and expensive neighbourhoods) and there was also a wonderful cycling track,” Nagpal says.

Moscow was out of bounds during the games even for Soviet citizens who needed special permits to enter the city. Several long distance trains to the capital were also cancelled. The Soviet authorities were worried about the lack of accommodation for the visitors to Moscow and asked foreign students to leave their campuses and move to special accommodation by the Volga River during the Olympics.

Students like Naresh Raina preferred to head home to India. However since many countries boycotted the Olympics, the students were then allowed to move back to their university campuses, but Raina had already left by then. He vividly remembers the transformation the city underwent in the run up to the games. “I departed from the Sheremetyevo 1 airport to go to India in the summer before the beginning of the Olympic Games and in September, I arrived back at Sheremetyevo 2. I literally didn’t know where I came. They built a new airport for the Olympic Games.”

Raina was also impressed with Moscow’s big Luzhniki stadium. “While crossing the bridge across the Moskva River one could see the Olympic rings and the Olympic bear made out of flowers, it was very beautiful,” Raina says. “The nice thing was that foreign cigarettes – Marlborough, Camel – became available on the eve of the Olympics, as well as some other things like foreign toothpaste and soaps.”