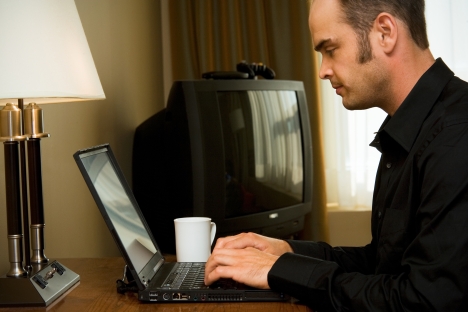 Experts relate the declining trust in the Russian television with a discrepancy between TV news and the picture of real life on a daily basis. Source: Getty Images

Advertisers’ most desirable demographic now has more trust in what they read online.

Russians no longer believe everything they see on TV. According to a Synovate Comcon poll, only 35 percent consider TV impartial – a historic low. While the Internet is more trusted – 40 percent of Russians have confidence in information found online – access is still limited for many Russians due to the country’s size and poor infrastructure

Historically, confidence in TV had been higher than in print media by tens of percentage points. Even in the 2010 poll, 40 percent of respondents trusted their TV sets as opposed to only 34 percent who had confidence in newspapers. This year’s ranking, however, showed that 36 percent of Russians trusted the information they read in magazines.

People between 20 and 54 have the least confidence in what they see on television; only 33 percent of them trust it. College students and senior citizens demonstrate a slightly higher confidence rating of 37 percent. In the case of the Internet, the distribution is different, with the 16-19 year old demographic trusting it the most and those over 35 the least.

“This was hardly unexpected. What’s more, the trend will grow: Confidence in TV will fall and that in online media and magazines will rise,” said Aram Gabrelyanov, a media tycoon and chairman of the board of the newspaper Izvestiya. “An Internet user feels involvement in the process of creating information, something that is impossible in the case of a TV set. Channel One will broadcast whatever the editor of its 9 p.m. edition has prepared, and viewers will have to sit through it without any opportunity to have a say in the content. It’s more complicated with newspapers: Readers have been more trusting of newspaper websites recently, while print editions come second.”

Declining confidence in TV is a global trend, according to Margarita Simonyan, editor-in-chief of the RT channel. “This is happening because many alternative sources of information have proliferated. This trend has been spectacularly confirmed in the US, where confidence in TV networks has sunk to a historic low of 21 percent[according to a 2012 Gallup poll],” she added.

The political opposition disagrees. “TV remains the same information and propaganda tool it has always been, but now that people have a choice, their attention is shifting away,” said Ilya Ponomarev, a State Duma deputy from the Just Russia party and a member of the State Duma Committee on Information Policy.

Stanislav Belkovsky, a political consultant, agrees: “The level of confidence in the federal TV networks is predictably declining because people see a discrepancy between TV news and the picture they observe in real life on a daily basis,” Belkovsky said.

Political analyst Dmitry Oreshkin connects the declining trust in TV with an overall decline in trust of institutions generally. “This process had been long in the making, and now it is just coming to a head. Confidence in all institutions is declining, including the government and the church.”

For its part, the presidential administration agrees that the decline reflects global trends. “Confidence in television is falling because the Internet has emerged as a direct channel of communication,” said a source in the Kremlin. “Of course, YouTube videos look more trustworthy, because anyone can upload their own content. On the other hand, TV will still retain a sufficiently large audience, because it produces a higher-quality product, particularly in the entertainment niche. There’s no tragedy in that, this is simply a new information society.”

Natalya Timakova, Prime Minister Dmitry Medvedev’s press attaché seconds this assessment. “This trend is natural because of the rapid development of the Internet and the rising popularity of blogs among Russians. The government takes this into account in its work: Cabinet ministers use social networks to obtain information, and the Prime Minister has a personal Twitter account. But television plays an important role for most citizens of the country, so we are working with both federal and regional networks,” Timakova said.