Navy Commander: Vikramaditya to be commissioned by the end of the year 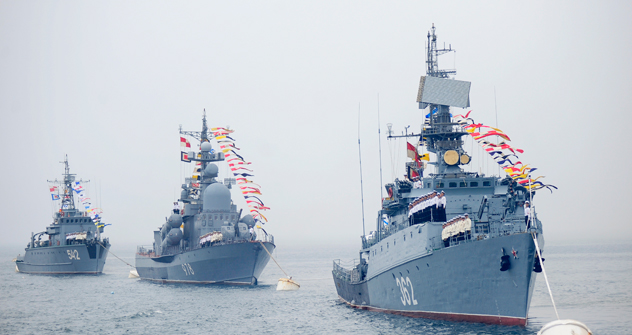 Sergey Safronov: Victor Victorovich, how many new ships, submarines, and supply vessels will the Russian Navy receive this year?

Victor Chirkov: We are working on establishing a group of new-generation strategic missile submarines armed with Bulava missiles complexes. The building of the Yuri Dolgorukiy and the Alexander Nevskiy, respectively the head and the first serial SSBNs of Project 955, is nearing completion.

Sergey Safronov: A new basing system is required to accommodate so many new ships and vessels. How is it coming along?

Victor Chirkov: That’s right. The Northern Fleet is working overtime getting ready to receive and supply the first new-generation nuclear submarines in 2012.

The Pacific Fleet is concentrating on completing design and exploration work on the entire shore-based infrastructure in order to be able to accommodate the new SSBNs starting in 2014, both in the Maritime Territory and Kamchatka. This is a pre-requisite for breaking ground there in 2013 to launch construction at a speed matching that achieved in the North.

Sergey Safronov: Victor Victorovich, the possibility of basing Russian Navy ships overseas was discussed several years ago. How is this matter being decided now?

Victor Chirkov: Indeed, we are still working on securing bases for the Navy outside the Russian Federation. This includes international discussions underway on establishing material and technical supply points in Cuba, the Seychelles, and Vietnam.

Sergey Safronov: And what about Tartous?

Victor Chirkov: We need this base; it has functioned before and will continue to function in the future. In particular, the Navy needs the material and technical point in Syria’s Tartous to supply Russian ships carrying out missions in the Mediterranean and for fighting pirates in the Gulf of Aden and the Indian Ocean. It’s less expensive for the government to maintain a base there than send fresh water and food supply vessels to the area.

Sergey Safronov: Will the fight against pirates continue?

Victor Chirkov: Of course it will. Both our own and international services have been reporting pirate activity not only in the Gulf of Aden but also in the Gulf of Guinea. It’s worth noting that this area is gradually becoming the second most popular base for sea pirates after Somalia.

Back to the situation in the Gulf of Aden: our Pacific Fleet ships carried out two trips there in the first half on 2012 as part of the anti-pirate mission. Our ships accompanied 14 convoys consisting of 92 vessels flying 27 different flags, including three under the Russian flag and 36 vessels with Russian citizens onboard. We provided security for 237 Russian citizens and managed to foil a hijacking of foil the hijacking.

Sergey Safronov: There has been talk of a Russian aircraft carrier on and off for years... So does this subject even exist for the Navy at all after the purchase of the Mistrals?

Victor Chirkov: A technical design for a new aircraft carrier for the Navy is under development right now according to the State Armaments Programme for up to 2020 (GPV-2020). The question of whether actually to build the ship will be considered after 2020. The new ship won’t be a classic aircraft carrier though. It will feature broader capabilities in terms of weapons and technical equipment.

Our only aircraft carrier, the Admiral Kuznetsov, is going to be upgraded under the GPV-2020 plan. That is why the new MiG-29K fighters are being purchased.

Sergey Safronov: What will be the fate of the Avrora cruiser?

Victor Chirkov: The Avrora is a historic ship, a branch of the country’s main Navy museum. The cruiser is served by a crew that keeps it afloat. It will retain this status.