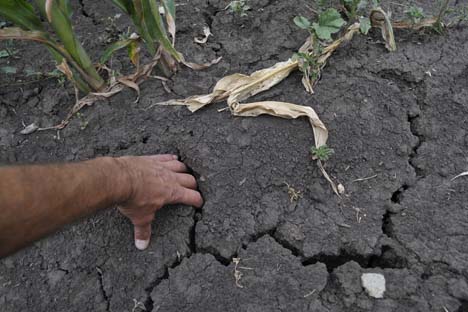 Uralkali, for which the Indian market is one of the largest consumers, cannot count on a new contract till September. Source: Andrey Arkhipov / RIA Novosti

Rupee-depreciation and reduction of subsidies to Indian farmers have affected demand from Russia.

Hopes for a quick recovery in demand from India are fading for Russian potash fertilizer producers. Depreciation of the rupee and the reduction of subsidies to Indian farmers are leading Indian fertilizer importers to not accept previously contracted volumes in full. Uralkali, for which the Indian market is one of the largest consumers, cannot count on a new contract till September. India accounts for 16 percent of Uralkali’s total sales.

According to statistics provided by CRU Services, in the second quarter of 2012 the consumption of Potassium Chloride in India was estimated at 0.4 million tonnes, a 19.6 percent fall when compared to the same period last year. Consumption of DAP was around 1.3 million tonnes (a year-over-year fall of 10.1 percent). Carbamide consumption fell to 5.6 million tonnes (a decrease of 5.5 percent). Konstantin Yuminov from Raiffeisenbank calculated that on average, 75 percent of all contracted volumes with the largest international producers has been delivered.

The current contractual obligations of the Belarusian Potash Company, a joint venture of Uralkali and Belaruskali, should have been fulfilled in March but deliveries are still getting delayed. According to financial analyst Konstantin Yuminov, the Indian side will manage to accept the remaining consignment only by late-August. BPC will have to wait for a new contract until late-September or early-October.

Yuminov believes that under new contract terms, prices for potash may fall with Indian importers asking for lower prices. The next potash contract from Russia with China may serve as a landmark (the price under the current contract is US$ 470 per tonne, $20 per tonnes lower than what Indian companies pay).

Oleg Petrov, sales and marketing director at Uralkali, said last week, “We plan to start negotiations on a new contract in August. Due to reduced state subsidies for potash and phosphate fertilizers for 2012-2013, we expect reduction of the annual volume of the Indian potash market from almost 6 million tonnes in 2008 and 2010 to 4 million tonnes in 2012.”

However, other market players look to the future with optimism. During the last month the rupee has appreciated by 1 percent and the rainy season has begun in the parched-dry country. Oleg Petrov says: "Due to the low potassium application rate in India and high prices for agricultural products at the moment, we expect a considerable consumption growth in India in 2013 and, consequently, a more rapid market recovery."