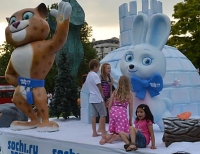 "I feel like I'm living a dream. I can't believe that I really won a gold medal. I'm so happy for that. I still can't feel I've just become an Olympic champion," Kim said. "I still haven't realized that I won the gold medal, I think some time will pass before I completely understand what I've done tonight."

"When it comes to Olympic medals, I'm anyway happy with any of them. Still, of course, I was just one step to get the gold medal and I'm quite frustrated not to get it."

To get to the final, Kim beat reigning Olympic champion Mariel Zagunis of the United States.