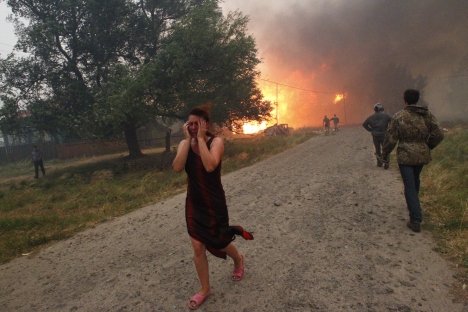 Mandatory homeowner’s insurance could be reinstated, along the lines of what existed in the Soviet era, to help deal with the fallout of natural disasters.

Mandatory homeowner’s insurance should be reinstated along the lines that existed during the Soviet era, Prime Minister Dmitry Medvedev stated recently. At a meeting called to discuss the aftermath of the Siberian wildfires, Medvedev said he had already given the government instructions to reconsider the matter of mandatory disaster insurance. The head of the government pointed out that it is through insurance that reimbursement for disaster damage is recovered worldwide. In the United States, for example, it is not possible to obtain a mortgage without purchasing homeowner ‘s insurance to protect the property.

This is Medvedev’s second pronouncement on the need to introduce obligatory homeowners’ insurance in as many years. Back in August 2010, after a slew of dramatic wildfires, the then-President talked about mandatory fire insurance and the need to change the laws to implement it. Yet the government failed to deliver on this type of regulation.

The Civil Code currently prohibits forcing individuals to insure their properties. It was amendments to the Civil Code that put an end to the system of mandatory insurance that existed in the Soviet Union from the middle of the last century. Through the early 1990s, privately owned buildings (including homes, country houses, and ancillary structures) and animals (such as cattle and horses) had to be insured. The coverage limit under the government-mandated insurance of buildings was established at 40 percent of their assessed value; premiums amounted to 0.35 percent of the coverage amount in rural areas and to 0.3 percent in cities. The insurance applied to privately owned, stand-alone buildings and structures (apartment buildings were not insured).

The state-run Soviet Gosstrakh was the insurer of everything that fell under mandatory insurance. In one case, a large payout under the Soviet insurance system covered losses caused by a tornado that destroyed or seriously damaged several communities in the Ivanovo and Kostroma regions in 1984.

The Soviet-style insurance of private homes was discontinued in 1998. According to insurance experts, owners of rural properties kept up their insurance out of habit, until the premiums under voluntary insurance increased by more than 30 percent. That rate hike prompted them to kick the habit.

Since then, government representatives have rehashed the idea of mandatory homeowner’s insurance every time a major disaster strikes. The State Duma has debated bills on obligatory housing insurance and the Emergency Situations Ministry drafted a bill on fire insurance, but nobody has been able to see the idea through.

So the most recent effort to return to the Soviet insurance model left market observers and insurers largely unimpressed. “The reality in our country is that citizens need to be forced to take care of their own property,” said Igor Ivanov, deputy head of the RESO-Garantia insurance company. “Average personal incomes are low and there are no savings to speak of, so people are powerless in the face of damage.”

Insurance union heads met recently with State Duma leaders; there, insurers committed to a charitable contribution of 6.2 million dollars for the Kuban floods in Southern Russia. To some, it appeared that the government was offering insurers new markets in exchange for charity.

Yet Rosgosstrakh representatives recall a precedent of such “charity,” also dating back to the Soviet era. They say that the damage caused by the earthquake in Armenia in 1988 was paid for at the insurer’s expense, outside the scope of the normal mandatory insurance system, on the basis of the value of record of the damaged buildings, cars, and cattle. But that case was quite different - claims were settled at a level of at least 465 dollars apiece, in excess of Gosstrakh’s coverage limits – as directed by the Politburo of the Communist Party.

Insurers view a return to the Soviet-era policy not so much as an opportunity to collect more premiums under universal coverage, but as a resumption of a safety net that deals with the damage caused by real catastrophes.