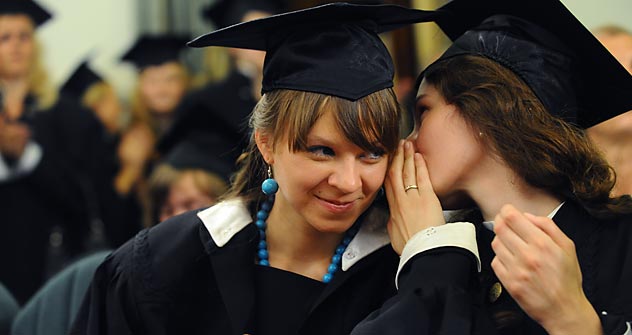 Since the Soviet Union fell, the number of institutes and universities in Russia has increased 10-fold, from 300 to 3,000. Pictured: Commencement ceremony at Moscow State Linguistic University. Source: ITAR-TASS

Prime Minister Dmitry Medvedev has announced his support for a plan to improve the quality of education in Russia at the expense of quantity.

A considerable number of academic institutions that do not meet up-to-date criteria should be converted or closed, Prime Minister Dmitry Medvedev said at a recent meeting of the open government panel on education.

“It is my deepest belief,” he added.

The idea that education should be done by fewer, but better, institutions was proposed by President Vladimir Putin during his term as prime minister, but Medvedev’s words indicate that the project of educational reform will continue to move forward.

Medvedev: Russian Universities should be the world's best

Deputy Education Minister Igor Remorenko told Russky Reporter magazine that he supported the prime minister’s views. “Since the Soviet Union fell, the number of institutes and universities in our country has increased 10-fold, from 300 to 3,000. Considering this, the number of academic institutions should certainly be reduced. The key criteria will be the quality of education – no matter if it is a state or a private institution. What matters is that good knowledge is given there.”

Not everyone involved believes that decreasing the number of academic institutions is the only solution to the problems of higher education. Alexander Sigov, rector of the Moscow State Technical University of Radio-Engineering, Electronics and Automatics, believes that the plan should be implemented with caution.

“The decision should be based on the opinion of a professional expert commission and human approach. It should consider the opinion of the professional community and scientists. There are also some other parameters to be considered like the number of publications, citation index,” said Sigov.

One of the most widespread fears concerning the initiative to reduce the number of universities is a possible resulting increase in corruption. If the number of academic institutions is reduced, the number of students accepted to universities will inevitably decrease, leaving open the possibility that wealthy students would attempt to bribe their way into school. Sigov, however, does not believe that such a scenario will occur in the kinds of universities that will survive the reduction. “I cannot imagine a corruption network in a university with deep traditions and strong teaching staff,” Sigov said.

The expert community has already responded to Medvedev's proposal. The recently founded Association of Russian Leading Economics and Management Universities announced its readiness to develop criteria to evaluate academic institutions and prepare a corresponding program on their reduction.

“The task of our association is to develop the methodology and announce that certain academic institutions do not meet the standards set and prepare specialists neither the market nor the state need, or that some institutions should be attached to stronger ones or raise the issue of their closing,” said Mikhail Eskindarov, rector of the Financial University of the Government of the Russian Federation, in comments to Russian daily Izvestia.

The final decision on the closing of an academic institution will be made by its founding body. In most cases, this is the Ministry of Education and Science, but Eskindarov notes that the association has an agreement with the government on its direct participation in the selection of universities to be closed.

The association has already released the criteria by which educational institutions will be evaluated. These include the income of its alumni five years after graduation, how the salaries of professors compare to the average regional salary, and the percentage of students whose academic qualifications allowed them to be accepted to the university without taking entrance exams. The scholarly work of professors and the scientific research conducted at the university will also be considered.

Experts say that the association’s task is not only to reduce the number of academic institutions, but also to protect some of them. According to Victor Panin, deputy chairman of the All-Russia Society for Protecting the Rights of Consumers of Educational Services, the association can lobby for the interests of academic institutions connected with its members. The Russian Rectors' Union has also declared its desire to participate in the process of deciding which universities should be closed, and Panin believes that other groups will also ask to take part in the process. According to him, at best, the activity of such organizations should be advisory.

This article was compiled from reporting by Russky Reporter and Izvestia.