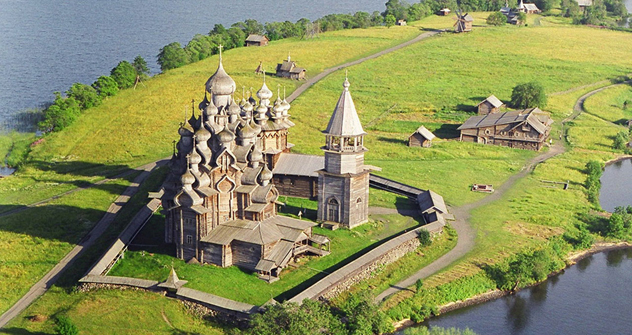 Pristine landscapes and grand monasteries dominate the photo exhibition on the Russian North, at the Russian Centre in Delhi.

Invitations to visit the Russian North are all around the foyer of Russian Centre for Science and Culture (RCSC) in New Delhi. They are in form of photographs which tempt a viewer into wanderlust. A boat yearns to tear across a calm sheet of water while early shades of daybreak seep through the mist over a northern lake. A monastery covered in soft snow shimmers under a winter sun. Lakes, forests, and temples, distinctive of the northern regions, are the theme of photos handpicked from the archives of RCSC.

There are quite a few pictures of Kizhi Monastery, presenting varied views of the World Heritage Site. A bird’s-eye shot shows the enclosure of the Transfiguration Church, the Intercession Church, and the bell tower at an edge of the Kizhi Island; many others capture the multi-storey, multi-dome, single-block structures which stand for the remarkable carpentry skills of the medieval settlers of the harsh and sparsely populated northern regions. A variety of traditional wooden buildings have been brought to the island alongside its original settlements – Vasileyo and Yamka, thus creating an open-air museum.  The craft and function of these houses and temples are akin to those in Himachal Pradesh, the Indian state which was a muse and home for Nicholas Roerich.

Kizhi is one of the many islands in the Karelia region which stretches from north of St. Petersburg to the Arctic Circle. A photo of Valaam Monastery rising amidst a forested slope makes for a Shishkin landscape. Karelian lakes and rivers provide a multitude of vivid landscapes. Two of these are standouts – one capturing the play of colours at Lake Odega, the largest lake in Europe, and another of the ‘unruly stream’ at Kivach which inspired Gavrila Derzhavin to pen his iconic poem “Waterfall.”

A high-angle view of snow covered Solovetsky Monastery evokes an envelope of tranquillity. A distant view highlights its high walls and reminds of Aleksandar Solzhenitsyn’s time here as a prisoner. The setting of White Sea coupled with its history as a labour camp is in the same ironical note as the cellular jail on the Andaman and Nicobar islands in India.

Vologda, known for its lace, flax, and butter, is portrayed with its blend of traditional wooden and more recent stone constructions. People play with snow outside a wooden house while in the background a golden cupola of Kremlin glistens in the Sun. Ferapontov monastery which houses the best of Russian medieval frescoes is captured through different seasons. A picture of Kirillov-Belozersky monastery leads a viewer’s eye along its fortified walls on the shores of Lake Siverskoye.

The medieval cities of Novgorod, Ustyug, and Pskov are well represented in the sizeable exhibition. There are photos which give a glimpse of the 12th century city, “Lord Novgorod the Great,” and its mix of traditional Russian, Byzantine, Romanesque and Gothic architectural styles. The heritage of “Ustyug the Great” is reflected through pictures of 17th century cathedrals. The ancient town, now known as Veliky Ustyug, is the official residence of Ded Moroz, the Russian avatar of Santa Claus. A boat cruises along the Pskov Kremlin which was built in 18th century. The modern transport through what was once known as the ‘land of purling waters’ is a collage of the present-day superimposed on its golden past.

The collection of photos glorifies the natural beauty of the Russian North – coniferous forests, often covered in snow; vast stretches of smooth water; abundant rivers conducive to fishing. It also documents the medieval monasteries of the Russian Orthodox Church. The exhibition does enough to encourage the pursuit of this lesser-known destination.