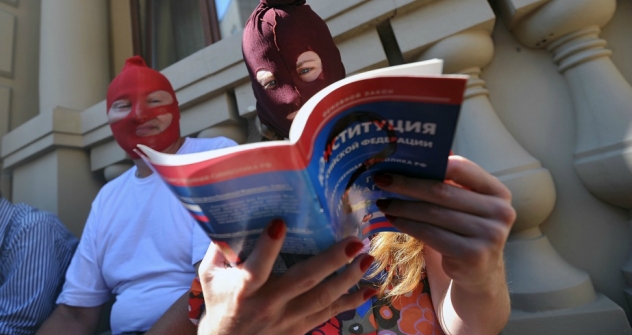 The first day of the court hearings left no doubt that the trial would take its place on the front pages not just of Russian papers but also media outlets around the world. Source: Kommersant

Daily protests outside the Khamovniki court in Moscow, a false report of a terrorist act, interference by Washington and new restrictions for the media – the first week of hearings in the Pussy Riot trial has proved to be full of excitement.

The trial of the punk group Pussy Riot, who read a prayer against Vladimir Putin inside Moscow’s Cathedral of Christ the Savior – began on July 30, 2012, and there is no end in site. If the first week of the hearings is any indication, however, the case will be in the news as long as it lasts.

Pussy Riot defense insists on recusal of the Judge

The first day of the court hearings left no doubt that the trial would take its place on the front pages not just of Russian papers but also media outlets around the world. Arguments have raged both in the court and in the press over the question of whether Pussy Riot’s action was religious or political in nature.

“It’s incredibly harsh to accuse us of having a religious motive. It’s not true,” said Nadezhda Tolokonnikova, who is accused of organizing the action. She was supported by her bandmate Yekaterina Samutsevich, who said: “I admit the incidents in the cathedral; I admit that I took part in them, but nonetheless it was a civil and political action.”

On the contrary, the nine clients who brought the case – security staff and attendants from the cathedral – do not see any political subtext in the girls’ actions. “They were yelling blasphemous words. There was clearly nothing political about that. The only political thing in it was that they mentioned the president’s name,” said Lyubov Sokologorskaya, who works as an attendant at the cathedral. However, Sokologorskaya was unable to recall the exact context of the  mention of Putin’s name.

On that first day, however, the main news was not the statements by the parties involved, but the court’s decision to restrict video relays from the courtroom. At the start of the session, the prosecution demanded that the direct video relay of the proceedings be halted, since in their view it was putting pressure on the witnesses. As a result the court agreed to close the relay when witnesses were speaking.

Additional restrictions were imposed on journalists two days later. “It is forbidden to reveal the facts of the case as described by witnesses in their evidence in online reports from the court room,” said Darya Lyakh, the Khamovniki court press officer, on Aug. 1. The court later clarified that this was not a ban but a recommendation, but the court’s actions provoked harsh comments by experts.

“Anything that is taking place publicly can be reported publicly. The court cannot forbid journalists to do their job in an open trial,” said Mikhail Fedotov, head of the Presidential Council for Human Rights. At the same time Vladimir Novikov, head of the information agency RAPSI, admitted that online reports from the Pussy Riot trial had “made the court’s work much more difficult.”

On 21 February five girls belonging to the Pussy Riot group arrived at the Cathedral of Christ the Saviour in Moscow. After putting on masks, they staged a “punk prayer”. A video clip later appeared on the internet showing the group singing “Mother of God, send Putin packing”. Three of those involved in the action were arrested: Nadezhda Tolokonnikova, Maria Alekhina and Yekaterina Samutsevich. Examination of the Pussy Riot case on its merits began on Monday 30 July. The alleged members of the group are accused of hooliganism. They are threatened with up to seven years’ imprisonment. The court has already heard several witnesses for the prosecution.

The situation surrounding the trial was further enflamed by criticism of the Russian court from the U.S. State Department. In conversation with journalists, department spokesman Patrick Ventrell said that from the American point of view, the Pussy Riot case was politically motivated and that Washington was treating it as persecution of the opposition. The Russians have not responded to the statement.

The following days of the court hearings also proved to be full of excitement. On the fourth day, the session was interrupted by an anonymous message saying that a bomb had been placed in the court building. The police were unable to find any explosives, but the court building was left no calmer for that. The lawyers representing Pussy Riot once again demanded that the judge be dismissed, since they regard her position as prejudiced. This was the fifth time they had made this demand, but (as on previous days) it was not granted.

This article was compiled from reporting by Lenta.ru, RIA Novosti, Kommersant and Moscow News.