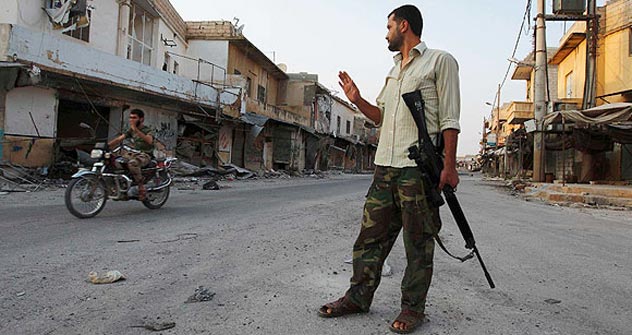 Anti-government protests in Syria that developed into armed clashes have been going on for more than a year which drives Syrian Ossetians to seek the shelter in Russia. Source: Reuters / Vostock Photo

More than 150 years ago, ethnic Ossetians from the North Caucasus region of southern Russia fled violence and became refugees in Syria. Now their descendants want to come back.

The Ossetian community in Syria has sent an appeal to Russian and North Ossetian leaders asking permission for the Ossetians, descendants of refugees who left the Russian Empire a century and a half ago to escape the ravages of the Caucasus War, to return to Russia.

Anti-government protests in Syria that developed into armed clashes have been going on for more than a year. “Being potential victims of the civil conflict, we daily risk the lives of our relatives and loved ones. The only state we can appeal to for help and salvation is the Russian Federation. We consider Russia to be the homeland of our ancestors originating from the Republic of North Ossetia-Alania, one of the Russian republics in the North Caucasus.

“The appeal we are addressing to Russia is to receive as compatriots the ethnic Ossetians from the Syria who wish to move to the Russian Federation, to return to their ancestral land in Ossetia in order to live in peace and harmony with the peoples of Russia,” the appeal reads in part.

Attached to the letter is a list of 33 names of Syrian Ossetians who would like to go to Russia for permanent residence immediately.

“There are about 700 Ossetians in Syria today. Of course, not all of them want to leave. Many have Arab wives, some have successful businesses that they hope to continue after the war ends,” said the author of the appeal, the head of the Ossetian community in Syria, Hisham Albegov. “But 150-200 people are dreaming of returning to Russia. Some of them even have Russian citizenship. My list has the names of the Ossetians who need immediate evacuation. They are the people hardest hit by the war, those who have lost their homes or relatives.”

Upon receiving the letter, the North Ossetian authorities agreed with the federal authorities that all Syrian Ossetians who have applied for visas to the Russian diplomatic mission in Syria would be issued visas in short order. The Ossetian officials are also ready to help financially; most Ossetians in Syria cannot afford to buy a plane ticket since the war has deprived them of a chance to work and earn, according to Albegov.

Albegov said that Syrian Ossetians could leave the country together with Russian citizens working there if the Russians are evacuated. So far, evacuation has not been announced, despite the fact that last week the Russian government officially put Syria on the list of countries “that are in a state of emergency or in a state of armed conflict.”

“The document does not envisage an immediate evacuation of Russian citizens,” said Artem Savelyev, press attaché of the Russian Embassy in Damascus, commenting on the Russian government’s statement.

But he added that the fact that Syria has been stricken off the list of countries with a difficult social and political situation and included in the list of dangerous countries shows that the country’s leadership is concerned about the fate of Russian citizens in Syria.