The thrill of performing Kutiyattam in Yakutia 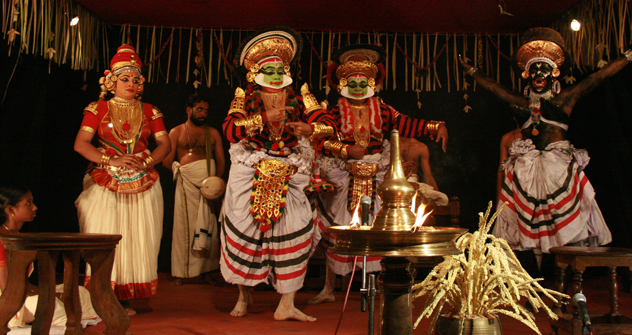 When a jam-packed audience in Yakutia, in the Russian Far East gave a standing ovation to the artists staging the Kutiyattam dance, the group was overwhelmed by the warm reception in such a distant land. Sasi Nair, troupe manager of the Natyamandapa Group talks to the Russia & India Report about Kerala troupe’s experience in Russia.

Russia & India Report:  Tell us a little bit about the group that performed in the Russian Far East.

Sasi Nair: Our Kutiyattam troupe had eight members; one troupe manager, two performing actors, three drummers, one make-up man and one singer. All the artists were professional as well as teachers under two Kutiyattam schools, which comes under Kendra Sangeeta Nataka Academy, which comes under the Indian Central Government.

Russia & India Report: How did it feel to be in the Russian Far East? It’s a quite a long distance from Kerala

We had the idea of the importance of the venue only when we reached Yakutsk.  After long and tiring flights from Trivandrum to Dubai and then to Moscow we reached Yakutsk in July and the first sight of the lady with the placard ‘India’ and the traditional welcome by the Yakutsk women made us understand that we were guests of the state.  The organizers in charge of us led us to the carriage in which there was a team from Bhutan.  We were together in the flight and got acquainted with each other.

Our accommodation was in a music school far from the city and travelling was not a problem for us since the organizers were successful in coordinating everything in smooth and perfect way.  The food was arranged in the dining hall there in the music school and for it was a different cuisine.  Within two days we used to it.  We Indians do use lot of spices and the lack of chilly was real problem. Within two days the organizers came to know about the tastes of all the delegates from various countries and they provided enough fruits etc… in the cottages.

Russia & India Report: How were the performances?

Our first performance was on July 10, to inaugurate the programme.  We were very glad to be the cultural representatives of a nation and starting a festival with Kutiyattam was something great.  We all enjoyed that thrill very much.

On the July 10 there were two performances.  First one was Nangiarkoothu, a solo performance by women actor called Nangiars. The story was an episode from Srikrishna Charitham Kamsavadham – The slaying of King Kamsa.  Second one was the Kutiyattam (combined acting) and the scene was from the 3rd chapter of the play Abhisheka by great Indian Sanskrit playwright Bhasa.

We had several engagements and programs other than our main performance on the tenth and closing ceremony on July 15.  Workshops, demonstrations, parties etc.

We checked the stage, lights and sound on the same morning. Since Kutiyattam is more on facial expressions and body languages, our stage was reduced and the performing area was brought closer towards the audience.  We are very much thankful to Natalia Ledova who is a Sanskrit scholar from Moscow and known to us for years.  We had planned for showing the story in English as the performance progresses.  Natalia gave us the idea of incorporating Russian as well and we could do it in the final hours.  We were told by many that it helped a lot for the Russians to understand and follow the story.  They were captivated by the expressions.

Russia & India Report: You received a very warm reception from the people of Yakutia…

We were told that the Yakut people rarely express their emotions and they are so strong by nature.  But after the performance, many people from audience literally hugged all of us in the green room with joy.  Interviews were taken by media persons from Yakutsk.  We had arranged a small photo exhibition of Kutiyattam and Nangiarkoothu.

Russia & India Report: How did it feel to be in Yakutsk?

Yakutsk was another world for all of us.  White nights with sunsets in the horizon for few hours was a wonder for us and also little troublesome for the first time, since in Kerala, our state it is 12 hours day and 12 hours night.  The change gave us few sleepless nights, but it was a different experience.

Russia & India Report: Did you meet some of the other participants at the festival?

We mingled so much with various organizers and the give and take of various cultures was going on.  It was a great chance to meet the artists of various masterpieces recognized by UNESCO.  The Olankho Epo (a rendition of a Yakut epic) was a really a surprise for us.  We understood their traditions through one of the Olonkho artists in charge of Indian Team – Ms Lilia Nikolaeva.  Those were really ever memorable days in our life.  The journey to and from the music school always filled with songs and music and for other nationals it was a first time experience.

Russia & India Report: How was your reception from the Republic of Sakha authorities?

We had a symposium and were guests of honour in the assembly of the Sakha Republic along with the delegates from other participant countries.  For any artist or person, the honor is something great.  The minister Mr Andrei Borisov, congratulated us on the performance of Kalamandalam Sindhu on the inaugural performance.  We were so happy that we could convey our art form in a nice way.  Normally the Kutiyattam performance takes 41 days to complete a chapter.  But nowadays it is common in temples as part of rituals only.  In the modern era, nobody has time, so In Kerala, normally the performance may long to three hours or maximum four hours.

Russia & India Report: What were your personal impressions of Yakutia?

In Yakutia, my wife Sindhu and I were attracted to two things.  One is the affection by Yakut people to their children.  Comparing to other parts of the world, we feels that the Yakut people give more love, care and attention to their children.  These can be understood by the body language and behaviour of parents in public places as well as private places.

The second thing is the preservation of their tradition and values.  They are moving forward along with the time and at the same they keep the traditional values, myths, stories, rituals etc, along with them.  They give extra priority to it. We had little information about Yakutia and while we were in Yakutsk, we feel that we are in a mysterious land.

Language was a problem.  Even the person who accepts luggage at the airways counter was unable to understand basic English words.  Also in the domestic flight S7, air hostess couldn’t get us when we requested for vegetarian food.  We had to depend ‘mudra’s (gestures) to make them understand.

Kalamandalam Sindhu had an interview in the national television and radio and we are thankful to Natalia and deputy minister who arranged it.

Russia & India Report: What memories stand out for you from the trip?

We had a sight-seeing session and we visited few historical places and permafrost caves.  While visiting the public places we were warmly greeted by the people, saying ‘Indian..Indian’!  The all were interested to take photos with us.  Many were interested in our dresses.  We remember one day, we all were in our traditional dress in a big square in front of Sakha Theatre.  Soon there was a crowd who were fascinated by our dressing and it took almost one hour to finish the photo shoot.

Within two days we started learning Russian and started to speak little words for “Thanks, Bye, Good Night, Good Morning, With Great Pleasure” etc… We got lots of little presents from the public and we keep those gifts as heartfelt treasures throughout our life.  Most of the Russians are fond of Bollywood films and even though they don’t talk in English, they sing Hindi film songs.

The Yakut people are very sincere and loving. We shall ever remember their hospitality and we have informed everybody that if they ever visit India, we would extend our hands with all the possible help.

We are thankful each and everybody who were helped us to be there in Yakutsk, UNESCO, Government of Sakha and media people who supported us, Indian Consulate in Vladivostok.