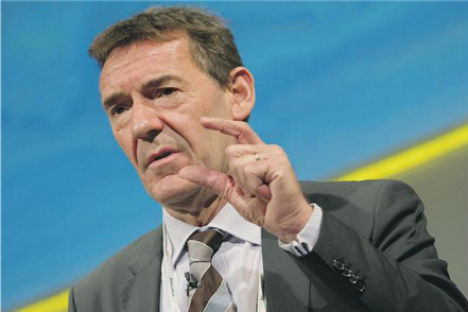 Brinkley, a widely read American syndicate columnist, betrayed where it worries the West most if the BRICS gets stronger. To be sure, BRICS has become an eyesore for the West.

Jim O’Neill, chairman of Goldman Sachs Asset Management who invented the acronym BRIC, recently called London the “BRIC capital of the world”. He reasoned that on Boxing Day, December 26, 2011, Chinese tourists spent 100 million pound sterling in London shops; and at that rate, given the expectation in UK that around 250000 visitors from mainland China and Hong Kong were expected between the Olympics and the autumn this year, London is going to be one of the biggest beneficiaries of growth in the BRICS (Brazil, Russia, India, China and South Africa).

Yet, BRICS continues to receive a lot of brickbats. The refrain is 2-fold. One, that the BRICS economies have slowed down and their time is over; two, the grouping will be replaced by other groups, which are equally if not more attractive as investment destination, such as Turkey or Indonesia and Vietnam. The inherent contradictions (which are admittedly there) among the BRICS member countries in regard of their respective interest allocation in the competitive environment of the contemporary international order are often played up by the Western countries to disunite and suppress the group or foment dissent within the group. Alas, there is also a sizeable constituency of FOWCs – “Friends of Washington Consensus – within the BRICS countries too who keep singing the Western tune that the BRICS lack “mortar”.

A particularly revealing opinion piece appeared last week – authored by Joel Brinkley, a widely read American syndicate columnist (who, by the way, doubles up as a professor at Stanford and is a Pulitzer-winning journalist for the New York Times) – who felt annoyed because he just couldn’t understand why the BRICS countries, which had so many internal problems to tackle, wouldn’t simply mind their business rather than dabble in the “world’s concerns” – such as climate change or IMF reform.

Now, don’t roll over with laughter but this is truly what he had to say about India:

“A few weeks ago, for example, Jairam Ramesh, India’s minister for sanitation, acknowledged that his country is the world’s largest open-air toilet. Unicef’s most recent figures, from 2008, show that about one-third of India’s 1.2 billion people have access to a toilet, leaving 800 million people with no choice but to defecate outside. The World Health Organization calls that “the riskiest sanitation practice of all.”

“At the same time, India’s economy makes America’s look healthy and robust. Standard and Poor’s sovereign rating for India is BBB-minus, just above a junk rating. And in recent weeks, ratings agencies have been threatening to lower it even more.

“Right now, one-third of the population lives on less than $1.25 a day. Nearly half the nation’s children suffer from stunting, meaning they don’t grow physically or mentally because of malnutrition during infancy. That’s one of the world’s highest rates. So is the “wasting” rate: children who are essentially starving to death. That’s 20 percent.

“Shouldn’t India be attending to all of that rather than expending energy on being a balky, brutish BRIC?”

In a similar vein Brinkley threw mud at each of the BRICS countries to show how decrepit they were and how so thoroughly “ineligible” to voice opinions  about such issues as Syria or Iran, when each of them is faced “incendiary challenges at home.”

Brinkley betrayed where it worries the West most if the BRICS gets stronger. To be sure, BRICS has become an eyesore for the West. (By the way, India overnight became the butt of BRICS jokes by Western commentators following the Great Power Blackout in north India recently.)

All the same, BRICS is carrying on regardless, apparently oblivious or deliberately ignoring the invectives and barbs aimed at it by the Western detractors. The HSBC India last week implemented the first renminbi denominated cross-border trade transaction in India for a major pharmaceuticals company. The BRIC currency swap proposal was indeed a concrete outcome of the summit meeting in March in New Delhi. Experts call it the most significant move in the international financial architecture since the creation of the euro.

Even more interesting is the news trickling in that an expert-level meeting of the BRICS will be held in Rio de Janiero, Brazil, to discuss the nascent idea of establishment of a joint development bank. The forthcoming meeting is expected to explore what the requirements of a BRICS Development Bank would be and possibly even conceive a roadmap to its establishment. The premise is that the BRICS bank is to be “launched” at the fifth summit in South Africa early next year.

But many issues are still to be thrashed out – where and how the proposed Bank would raise its capital, invest its funds, where it should be based, who should lead it, and so on. Within its purview could also figure important issues such as trade facilitation, global payment regime, global insurance, etc. Though the idea of the BRICS Development Bank itself was originally born in the Indian mind and New Delhi would have a particular responsibility to generate ideas, it has become the common baby of the 5 countries.