RIMPAC: Moscow and Washington are forging a naval shield 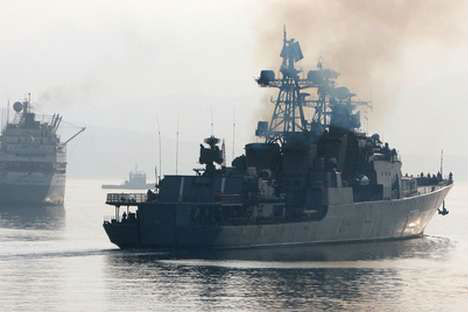 With the main part of the RIMPAC-2012 war games successfully completed, a detachment of ships of the Russian Navy Pacific Fleet has sailed into Pearl Harbor.

RIMPAC – or Rim of the Pacific Exercise, which are war games taking place in Pacific region countries – are mainly focused on working out military actions and interaction between the naval forces of the allied countries of the US. It so happened that, for the most part, countries with obvious or hidden frictions with China were the ones invited to take part in the RIMPAC-2012, and some media even dubbed these exercises “anti-Chinese”. However, it is at the very least premature to talk about Russia “preparing to wage a war against China in the company of the United States”.

Available information indicates that the fleets of Russia and the United States were working out interactions in the traditional “anti-piracy” vein: inspection groups and anti-terror units on “suspicious” and “captured by terrorists” ships, joint maneuvers, patrols, and reconnaissance operations. Nevertheless, elements of military actions were also included. For example, joint targeting of aerial objects. In the course of the exercises on repelling air attacks, aircraft of the Canadian Air Forces played the role of a conditional enemy. Of course, the aircraft were not fired at, not counting “conditional launches” of anti-aircraft missiles, but firing at air targets did occur. The Admiral Panteleev’s artillerymen successfully shot down a high-speed radio-controlled object launched from aboard the USS Gary.

The United States and Russia are actively working out interactions of their armed forces, even more so considering the fact that the RIMPAC maneuvers – during which Russian ships act together with NATO craft – are not the only war games in 2012. There are other non-naval exercises on the war games’ list. It could be stated that today the intensity of joint actions is the highest it has ever been as far as the whole of post-Soviet history is concerned.

The question is not at all new. What are the prospects of these joint actions of Russia and its recent potential enemies? War games come to mind, including the exchange of trainees, supervisors, and so on. It is obvious that Russia's accession to NATO is out of the question, and not just due to mutual political rhetoric. Such an accession would be equally disadvantageous to both parties.

In order to integrate Russia into the Alliance, NATO will have to solve a lot of issues related to incorporating a giant war potential within the bloc, which is comparable only with the US potential. This process cannot but cause a painful reaction among the new members of the Alliance, which consider the organization to be a “shield against Russia”. For example, in case of Russia's integration into the North Atlantic Alliance and the foundation of some kind of an independent “NATO East-European Headquarters”, it is very likely that a situation might occur where some of the former Warsaw Treaty members will be forced to receive orders from Moscow.

For Russia, membership in NATO would mean joining a bulky multiform organization with uncertain historical perspectives and significant internal factions, and in addition bearing a heavy burden of the Afghan conflict with doubtful consequences – and an actual prospect of a big war in the Middle East.

In these circumstances, the unity of Moscow and Washington “under Brussels’ star” looks very unlikely. Yet it does not hamper joint exercises. Russia and the US have too many points of contact to let pre-election rhetoric or problems of the lower Alliance to ruin attempts at establishing normal relations. Time will show what forms these relations will assume.