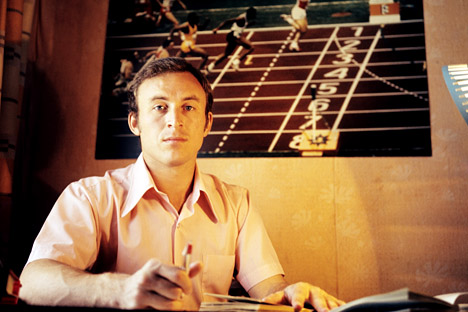 The Western media used to describe Borzov, a Ukrainian former sprint athlete for the Soviet Union, as the “Russian Robot” because he was so unflappable. Source: ITAR-TASS

Valery Borzov’s sprint double at the Munich Olympics 40 years was a stupendous achievement in the backdrop of the Cold War rivalry.

September 1, 1972. The Olympics Games, Munich, Germany. In the main stadium, 80,000 pairs of eyes were focussed on the athletics track, where the men’s 100 metre race was about to start.

For the first time ever an athlete from the Soviet Union was the favourite to become the fastest man on earth. Twenty-two year old Valery Borzov was up against Robert Taylor, 23, of the United States and Jamaica’s Lennox Miller, 25. Borzov had been undefeated on the international circuit for the past two years, so expectations on the Russian side were high.

Borzov didn’t let his country down. Running a blistering race, the Soviet athlete did not simply beat his challengers – he ran them into the ground, in a time of 10.14 seconds. The Americans, however, were quick to rubbish the result, saying two of their top racers Eddie Hart and Reynaud Robinson were disqualified (for not turning up because the US coach got the schedule all wrong).

The uber-cool Borzov’s reply silenced the raucous American media: “I beat the men who were there.”

Still, the American side did not concede defeat and swore they would beat him in the 200 metres.

Forty eight hours later Borzov was back on the track, with three Americans, Larry Black, Larry Burton and Chuck Smith, keen on revenge. Continuing with his excellent form, he beat everyone to the gold medal in 20.00 seconds, followed by silver in the men’s 4x100 metre relay race.

Again, the American refused to accept defeat gracefully, with Black calling Borzov a clown. He said the Soviet athlete hadn’t set any world records and had turned to look back while winning those races. “What world class runner would do that?” he asked.

My only opponent is the stopwatch

Such taunts did not bother Borzov. For, he had one quality that made him an all-time great – he was super cool. The sprinter never cared about the big names of sprint. In an interview to a television channel shortly after his 1972 golden moment, he said, “My only opponent is the stopwatch.”

This single statement reveals how far ahead of his time Borzov was. For, in sprints it doesn’t matter if you are merely fast; you have to be relaxed to win these races. Many athletes panic when they see their rivals gaining on them; they become tense and as result their muscles tighten. This tightening of the muscles slows them down. Relaxation, therefore, is the difference between first place and fourth.

This is a quality shared by Jamaica’s Usain Bolt too – he’s relaxed to the point of being disdainful of his opponents. Bolt’s uber-confidence also winds up his rivals, which works in his favour.

In fact, during their training, Borzov and his teammates had to run 100 metres with a paper tube between their teeth. The coaches would inspect the tubes after the race – those who left teeth marks on the tubes were considered sprinters and the rest were simply runners. “This helped me develop the main quality of a sprinter – the ability to relax,” he says.

In an article he wrote in the September 1979 issue of the Russian magazine Легкая Aтлетика (Track & Field), Borzov wrote about his intense mental regimen: “It is necessary to develop the ability to disassociate oneself from the world and evoke the desired images within oneself by willpower and exercising the imagination. I try to conserve my nervous energy right up to the time of going onto the track. During the warm-up process I call to mind a forest and a fishing scene. This leads me to feel tranquil and discourages a feeling of bustle and hurry.”

An athlete must not let his rivals know their inner state. “Underneath the external sameness they can sense uneasiness and fear, which are signs of strength or weakness,” says Borzov. “Someone tries to look me in the eye; someone waits for me to look at him… Don’t look and don’t wait! I give out no information. Let my opponents languish from a lack of information. Uncertainty is always disturbing. Those who are more disturbed are those who make more mistakes. Such are the rules of the game.”

Five minutes before the race, the equation changes. Calmness gives way to excitement of the senses to simulate the state that prevails during running. “This can be accomplished on a foundation of anger and risk, but not fear which leads to confusion and chaos. I…stir up the thought that I am alone and that seven people are against me.”

The Western media used to describe Borzov as the “Russian Robot” because he was so unflappable. Frank Litsky of the New York Times is candid enough to admit that the American media went completely hysterical. “In the American mentality of those days, he was a Russian, he was communist, he was a bad person,” said Litsky in a television interview. (Munich went really bad for the United States; it was the first time the Russians had topped the medals tally with 50 golds to America’s 33; the Russians also won the basketball gold, beating the US 51-49.)

“Some people thought he was a prototype, a new super athlete,” added Litsky. After all, even in victory Borzov rarely offered more than an enigmatic smile and a wave. His rivals alleged he was a product of Russian high tech.

If they meant fancy training equipment or modern sports medicine contributed to Borzov’s prodigious efforts, they were wrong. It was all a result of hard work and innovative coaching. For instance, his body’s reactions were monitored in a manner previously reserved for Russia’s great ballet dancers. Every race became a calculated exercise. Targets were set so that every achievement became a stepping stone and gave him confidence.

Borzov was now able to trounce the previously unbeatable American sprinters. By the time the Munich Olympics rolled in, he was at his peak. It is a shame that Hart and Robinson were disqualified because the encounter would have been a memorable one.

But would he have won? Well, here’s a hint. “My first thought after winning was, is it so easy to win the Olympic gold?” he recollects. Perhaps if he had been pushed harder, the Soviet athlete would have able to draw upon his reserves to go faster. Champions always exceed what you expect from them.

Forty years after that memorable September day in 1972, Borzov remains the last person of European origin to win a gold medal in the 100 metres at a non-boycotted Olympics. In a sport that Africans have dominated for over six decades, that remains a stupendous achievement.

That is perhaps why Italian Olympic champion Pietro Mennea singles out Borzov as his toughest opponent. In an interview to The Malta Times, Mennea, who won the 100 metre bronze medal in Munich, and Olympic and world titles subsequently, said, “Borzov was without doubt my greatest rival. He was very tough to beat. He had a great physique and was a very strong sprinter. He was someone I looked up to as a young sprinter and there’s no hiding that trying to beat him was my biggest motivation.”

Legendary athlete Jesse Owens was at odds with the Americans in his reaction to the Munich encounter where his countrymen got creamed. “Sensational,” he said. And when asked which runner Borzov reminded him of, Owens said, “Me.”

Message to the stars

Five years later, Americans came to terms with Borzov’s victory. In 1977, NASA launched two spacecraft, Voyager 1 and 2, into orbit on a planet-hopping excursion. Both spacecraft have now travelled out of the solar system, carrying voice recordings, photographs, maps, drawings and videos intended to signal our location to intelligent life in the great beyond. Among the dozens of photographs is one of Borzov’s victory at Munich.