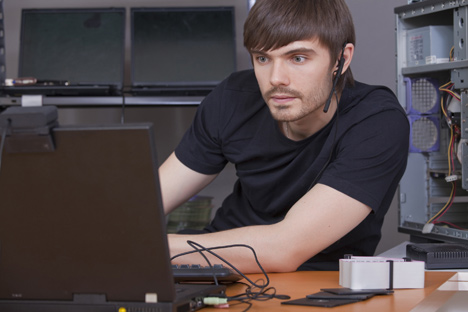 Freelance contracts usually pay people for a particular project rather than by the hour, which protects employers from lazy freelancers, according to experts. Source: PhotoXPress

Freelancing is still a difficult concept for Russian employers to grasp, according to surveys. A recent study by the Board Solutions Consulting Company showed that over the past two years, the number of employers in Russia contracting with outside workers has increased only by 2 percent. However, Larisa Dydykina, a partner at the firm, suggests that growth rates in the industry could increase due to the financial crisis.

“For instance, even [insurance firm] Rosgosstrakh where I worked as a deputy director general used to have 85–90 percent of all agents on staff. Then to reduce expenditures, many agents were hired according to agent agreements, which in fact imply freelance working: insurance is not paid and a person has no working place. And an agent is paid only if he/she has earned something for the company. This practice is spreading as there is a necessity to reduce expenditures,” said Dydykina.

View the infographic: Freelance in Russia

Freelancing as an industry is very young, both in the literal and figurative sense of the word. Working on a freelance basis was impossible during the Soviet era, when people without a permanent work place were considered parasites. As a result, few Russians had the ability to even explore this possibility until 20 years ago, and members of the older generation still find it a strange concept. According to Free-lance.ru, the share of freelancers between the ages of 18–22 is 20 percent while only 7 percent of this age group reports full-time employment. Among people aged 23–26, the statistics are similar – 20 percent of them report working as freelancers, while 11 percent of them are employed full time.

Official statistics show that there are only 200,000 freelancers in Russia – just 0.3 percent of the working population. Many experts, however, believe that the actual number of freelancers is several times higher, but that these freelancers choose not to report their status fearing claims by the tax authorities.

The number of freelancers in the U.S. and Europe is substantially higher, according to Daria Grevtsova, executive director at the Center for the Study of Trade Unions, Protest Decisions and Social Peace. “In late 1990s–early 2000s, about 30 million people had remote jobs in the U.S. and EU. At present, according to the different estimates, the number of people having their working places at home is about 55–60 million,” Grevtsova said.

Taken another way, however, the comparison is not so bad. In Russia, the share of freelancers in the IT sphere is 35 percent of the total labor market, while in the U.S. it is 44–45 percent. Figures in the sphere of writing and business services are comparable in the two countries, and Russia is even ahead of the Western countries in some fields, such as design.

Natalia Golovanova, head of the Superjob.ru Survey Portal, says that most Russian company heads are sure that people work better being in the office environment than out of it.

“Thirty percent of employers who do not hire freelancers and 19 percent of those having freelancers on staff believe that people who work at home lie down on their jobs. According to 6 percent of employers, the home environment helps freelance specialists work better than their office colleagues because nothing distracts them from the work. The overwhelming majority of employers – 72 percent – believe that even if freelancers work well, they have little chance of being promoted because they do not communicate with the company’s staff and little is known about them.”

Freelance contracts usually pay people for a particular project rather than by the hour, which protects employers from lazy freelancers, according to Anna Kartashova, head of the Psychological Center at Volkhonka.

“When not being watched, any normal human being tries to do less. In fact, it is a natural human characteristic and it should not be estimated as a bad quality. A person tries to give less, while another one tries to give back less, too. So, an employer tries to pay for the work done at the minimum rate, it is a law of business. Thus, if you can control the result of the work and are ready to pay enough for the employee to do the work as required and if he/she agrees to be paid only when there is a certain result, you can allow this person to work at any distance from the office," said Kartashova.

This story was compiled from reporting by rbc.ru and kommersant.ru