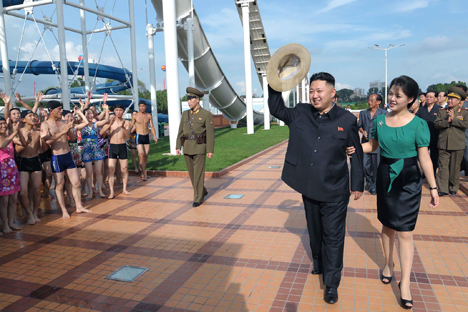 New reports from the hermit kingdom indicate that, at least in domestic affairs, Kim Jong-Un is taking a different path from that of his father and grandfather.

It looks like North Korea is in for its own perestroika. Recent reports from Pyongyang suggest that young North Korean leader Kim Jong-un has opted for a new leadership style, which may be a precursor to reform.

Foreign observers began speculating recently when photographs of the North Korean leader accompanied by an unidentified attractive woman appeared across the media. Pyongyang television later confirmed that the woman seen with Kim Jong-un was his wife, Ri Sol-ju. Traditionally, North Korea has hidden its first ladies, and experts began comparing Kim’s decision to allow his wife to appear in public to a similar decision by Mikhail Gorbachev.

Kim and Ri visited the construction of a new amusement park in Pyongyang feathering a mini golf course, a swimming pool and an aquarium. The construction workers, who are also soldiers, welcomed them with an enthusiastic “Hurrah!” and presented Kim Jong-un with bouquets of flowers, reported the Korean Central News Agency (KCNA). This media breakthrough marked a softening of the traditionally forbidding image of a North Korean leader.

Furthermore, in early July, the Democratic People’s Republic of Korea television channel aired a show with performers dressed as Mickey Mouse, Winnie the Pooh and Snow White. The show was performed by the band Moranbong, which was formed a few months ago at Kim’s behest. In the video, characters can be seen dancing against the background of footage from popular cartoons, including Dumbo and Beauty and the Beast. It would be the same as if the Korean revolutionary opera “Sea of Blood” was performed on Broadway.

Other changes have included extending the coverage of the London Olympics to five hours a day from the standard 15-minute late night review. For the first time in the country’s history, people were able to watch North Korean athletes receive their medals.

“So far, we have observed changes in leadership style, but it is hard to say whether the country’s political objectives have changed,” said Georgy Toloraya, director of the Korean program at the Institute of Economics of the Russian Academy of Sciences.

Toloraya admitted that there were certain preconditions for changing policies. “Specifically, there have been reports that North Korea has been experimenting with methods in agriculture. They said that a resolution was issued on June 28 to create smaller teams of four to six workers to replace the larger ones. What this means is that families will have a specific plot of land to work on, and they will be able to keep 30 percent of the harvest,” he said.

Toloraya noted that if the resolution is implemented effectively, then it will indicate that the North Korean elites have developed an understanding that reforms are called for.

Reforms in China and Vietnam also began with similar moves in agriculture. Such reforms helped Vietnam turn from a chronic importer of rice perpetually on the verge of famine into an exporter of rice within just three years. Crop failures have become a scourge of the North Korean regime.

Incidentally, this all happened against the backdrop of the dismissal of Ri Yong-ho, chief of the general staff of the Korean People’s Army, which received scant coverage in the official media, indicating that the influence of military conservatives has been growing weaker.

“This all suggests that North Korea is undergoing very interesting processes, and the vector of these processes is a certain turn of the regime from stubborn persistence towards more flexible forms of governance and the search for new ways forward,” Toloraya said.

However, any hope experts have for reform in the regime only applies to the domestic social sphere, and is not expected to extend to North Korea’s nuclear program.

Singapore recently hosted unannounced talks between North Korean diplomats and an unofficial U.S. delegation. Following the talks, Choi Sun-hee, deputy director of North Korea’s Foreign Ministry, sent an email to Voice of America’s Korean Service saying that her government has “no choice but to re-examine the nuclear issue due to the United State’s firm and hostile policies towards it.” “Unless there is a change on the U.S. side,” she added, “the prospect of denuclearization by North Korea is very remote.

“If the US is sincerely ready to engage in dialogue and withdraws its hostile policies – not through words but through action – to resolve the nuclear issue and improve relations between the two sides, we will be willing to work to resolve the issues,” Choi said.

Then again, appealing directly to the American media is an unconventional approach for the North Korean administration. The message implies a call for a dialogue rather than habitual threats, which, incidentally, was what Gorbachev started with.