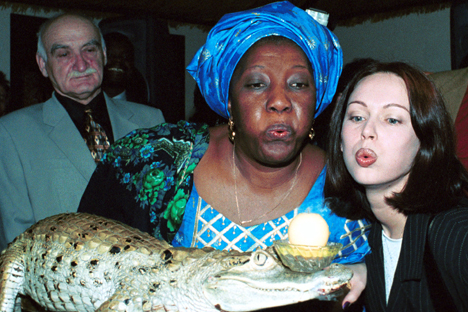 Countries such as China and the United States are promoting their interests in Africa through the use of soft power. Is Russia missing out?

Russia is missing out on opportunities to use soft power in Africa, according to experts on the continent.  Russian authorities struggle to push "soft power" buttons in an effort to rebrand Russia's image and to regain some social and cultural influences in Africa population, experts say the plan of cultural diplomacy might only be achieved with consistency and to deliver on their promises promptly.

Russia and Africa need to look for ways to engage

Martyn Davies, C.E.O. of consulting firm Frontier Advisory and a faculty member at South Africa’s University said that Russia’s use of soft power is not up to date in Africa.

"For all these years after the Soviet collapse, I have not seen any evidence of the soft power in sub-Saharan Africa being exercised by Russia. This contrasts to the other BRICS states which, to varying degrees, are able to project soft power in Africa, for example, Brazil - linguistic, India - ethnic, and China - development models," said Davies.

He pointed out that although Russia and South Africa have long standing ties, Russia’s cultural diplomacy in South Africa is still extremely low compared to China’s.

Tom Wheeler, a former South African ambassador to the former Soviet republics of Central Asian republics and now a research associate at the South African Institute of International Affairs (SAIIA) said via email: "Russia is to all intents and purposes invisible, except for articles that appear in the various media – usually about the political scene in Russia, Putin and the elections etc. In South Africa, Russian ballet performs in our theaters from time to time, but I don't recall any emphasis on cultural diplomacy."

According to Wheeler, these performances were merely commercial endeavors.

In contrast, China is very active in its cultural diplomacy, Wheeler argued, pointing out that just prior to the meeting of the Forum for Chinese Africa Cooperation last month, China hosted an open house at its embassy in Pretoria that attracted a cross-section of the media, think-tanks and community at large.

In addition, local teams that had recently visited China appeared on stage, cultural dancers entertained and the ambassador spoke to the audience. Large posters illustrated China’s efforts in South Africa and highlighted the ambassador's various engagements with government and the community.

"Although representatives of the Russian embassy discreetly attend our various presentations from time to time, I cannot recall a Russian ambassador ever delivering an address here in the nine years I have been at SAIIA,” Wheeler said, noting that Russia has a new ambassador to South Africa who has been more visible than his predecessors.

After studying Russia's policy issues with African countries for more than a decade, Rex Essenowo, an independent economic analyst based in Moscow, said that the Chinese are also very smart at establishing cultural friendships at both the people-to-people and state levels.

"They work with the youth and they are well informed about the global developments, emerging challenges and the recognizable role they have to play to become real super power, a strong force that cannot absolutely be ignored...besides, they don't talk too much, no political rhetoric, they just act strategically ahead of time," Essenowo said.

"And of course, for Russia's soft power to be effective it needs to organize frequent forums. But there are also basic things needed, first and foremost, the will power and interest of African leaders. If that issue is resolved, more than half of the problems will dissolve itself without much financial involvement,” Essenowo added. "Africans can get their cultural troupes on tours to Russian cities because we are talking about combined efforts to salvage the continent's strategic development rather than to be over critical about Russia's interests in socio-cultural spheres in Africa."

Russia could learn from China in this sphere. In July 2012, Chinese President Hu Jintao at the fifth China-Africa forum offered to increase support for promoting people-to-people friendship and various cultural programs as well as financing frequent exchanges of media, youth and women organizations between China and African countries.

According to official reports, China has increased its financial contribution for the training up to 30,000 African specialists in different fields under the "African Talents Program" and offered 18,000 government scholarships, and will build cultural and vocational skills training facilities in African countries. China has set up 29 Confucius Institutes or Classrooms in 22 African countries.

The China-Africa Joint Research and Exchange Program was also launched in Beijing and this program has already held a series of events promoting exchanges between scholars and think tanks, such as the China-Africa Think Tanks Forum, both parties have agreed to fix a "China-Africa Press Exchange Center" in China to encourage exchanges and visits between Chinese and African media, and China already supports frequent exchange of correspondents by media organizations of the two sides.

Similarly, the U.S., UK, France and other players have revised their use of soft power in Africa. For example, in June, U.S. President Barack Obama launched a new U.S. strategy for sub-Saharan Africa, and that was followed by a special session of the Senate Committee on Foreign Affairs that ended with a budget proposal to support the work of nongovernment organizations and social responsibilities of U.S. companies operating in Africa.

The UK and France have also both said that they are reviewing the educational services of British Councils and Alliance Francais to expand cultural and educational programs.

For the past few years, Russia has made some efforts to return to Africa, but unfortunately little has been made public.

"Russian media write very little about Africa, what is going on there, what are the social and political dynamics in different parts of the continent. Media and NGOs should make big efforts to increase level of mutual knowledge, which can stimulate interest for each other and lead to increased economic interaction as well," said Fyodor Lukyanov, editor-in-chief of the journal Russia in Global Affairs.

"To certain extent," Lukyanov said, "the intensification of non-political contacts may contribute to increased interest. But in Russia's case, the main drivers of any cooperation are more traditional rather than political interests of the state and economic interest of big companies. Soft power has never been a strong side of Russian policy in the post-Soviet era."

But, this may be changing. In a foreign policy speech, President Vladimir Putin urged all his Russian ambassadors and diplomats to actively use new technologies to highlight Russian success stories, improve Russia's image and defend its interests abroad, according to Russian daily Kommersant, quoting an official who attended the meeting.

"It's not enough to just crow something once… We should explain our positions again and again, using various platforms and new media technologies, until they understand," the official, who spoke on conditions of anonymity, quoted Putin as saying.

According to experts, the level and intensity of cultural influence can be raised by the effective use of soft power, and of course, social media as pointed out by President Putin in his mid-July address, but the primary task is for diplomatic representations both in the Russian Federation and inside Africa have to recognize new methods of disseminating information, work with transparency and self-dedication, and keep up their legitimate responsibilities within the policy framework.