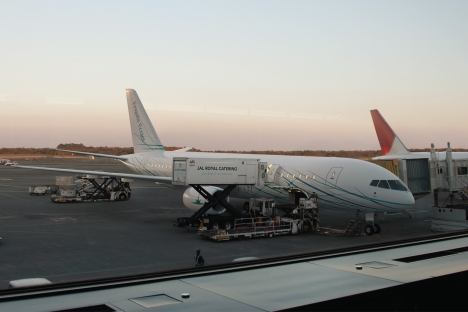 The Frigate Ecojet could prove to be a breakthrough in the market with its oblong body shape.

Russia has begun testing a new passenger aircraft. The Frigate Ecojet has already passed 55 test cycles in the wind tunnel at the Central Aerohydrodynamics Institute near Moscow. The Ecojet represents a new generation of wide-bodied passenger aircraft with a range of up to 4,500 kilometers, which means that it will be used for short- and medium- haul flights where wide-bodied planes can be used most efficiently. Statistically, routes shorter than 3,500 kilometers account for about 80 percent of the passenger traffic in Russia.

The Ecojet’s defining feature is its oval-shaped body – a major departure from the traditional round shape of passenger planes. According to the Ecojet’s developers at the Russian Aviation Consortium, this shape is ideal for the plane to transport as many passengers as possible while remaining relatively small.

The basic version of the plane, with a take-off weight of 129 metric tons, can accommodate 302 passengers. It has a range of 3,500 kilometres and a cruising speed of Mach 0.8. Its aerodynamic quality stands at 17.5 and specific fuel consumption at 15 grams/passenger-km. IATA Consulting estimates the potential market demand for the Ecojet at 650 units in the period up to 2030.

The developers made use of a wing with a high thickness ratio to ensure sufficient climbing power. Wind tunnel tests were done to either confirm or disprove the basic concept of the innovation. The tests showed that the new wings were successful, but new tests are will be conducted at the Central Aerohydrodynamics Institute to identify the takeoff and landing characteristics of the plane, factoring in the ground effect.

The elliptical body modifies the aerodynamics of the plane and its economic characteristics as well. The creators of the Frigate-Ecojet believe that the passenger-kilometer cost can be reduced 25-30 percent compared to current rates.

The body shape also makes the plane smaller and lighter than current competitors: the Frigate Ecojet will be 30 percent shorter and 80 tons lighter than the Il-86 or Airbus A-300. The real figures may turn out to be even more impressive due to the use of composite materials.

The new plane has often been compared to the Il-86 and the A-300. The Airbus model once marked a breakthrough for the European aviation industry, throwing down the gauntlet to the American Boeing lineup. And when it comes to the Il-86, Russia has produced only 111 units and experts argue that the model still has a largely untapped capacity, mostly because of the discontinued modernization and upgrade efforts. But neither the Il-86 nor the A-300 is currently mass-produced.

Analysts agree that if the Ecojet proves successful, the Russian aviation industry will feel as strong on the civil aircraft market as it does in the military aviation sector.