Ukraine's new law, which significantly broadens the use of the Russian language and other minority languages in the country, came into force after it was officially published in the Ukrainian parliament's Voice of Ukraine newspaper on Friday. 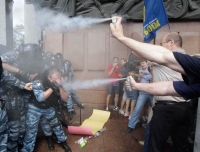 Photo of the day: Ukranian opposition opposes against Russian language

The bill, authored by parliamentarians Vadym Kolesnychenko and Serhiy Kivalov from the Party of Regions, was adopted by parliament on July 3, triggering protests in Kiev and other Ukrainian cities.

Ukrainian President Viktor Yanukovych signed the language policy bill into law on August 8 and ordered the cabinet to form a working group in charge of drawing up proposals to improve laws regulating the use of languages in the country. The group should include public figures, as well as prominent educational, scientific and cultural experts specializing in language issues.

After the language bill was signed into law, the Batkivshchyna United Opposition promised to annul the "anti-Ukrainian" act on languages and bring the president and parliament speaker to justice.