100 years in the sky: centenary of Russian Air Force

The Voice of Russia
Mamonov Roman 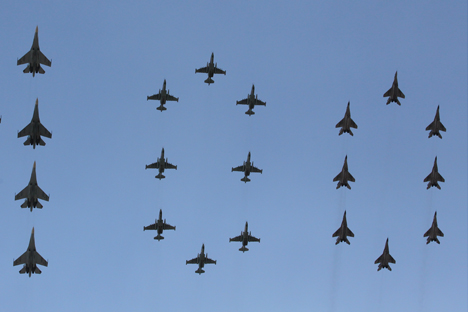 Official celebrations of the centenary of the Russian Air Force came to an end on Sunday, with combat and training aircraft and various types of helicopters with Russian and foreign crews taking part in the festivities.

The centenary of the Russian Air Force was marked on Sunday with a large air show at the Zhukovsky air field, known globally as the as the venue of the MAX air show. Combat and training planes and various types of helicopters with Russian and foreign crews took part in the festivities.

Tens of thousands of spectators came to Zhukovsky to watch the impressive show. It was launched by parachute jumpers who landed with huge flags of Russia, the Russian Ministry of Defence and the Russian Air Force. Then, six Sukhoi-25 jets flew over the air field and decorated the sky with the Russian tricolour. This was followed by a show by 21 jets – MiG-29, Sukhoi-25 and Sukhoi-27 – that flew over the spectators forming the figure 100.

The spectators witnessed the prowess of the Tupolev-22 supersonic missile-carrying bombers and the Tupolev-95 and Tupolev-160 strategic bombers, as well as the Antonov-26, Antonov-12, Antonov-22 Antey, Antonov-124 Ruslan and Antonov-2 aircrafts. The spectators also saw a retro programme which demonstrated the history of Russian and world aviation.

“During today’s festival dedicated to the centenary of the Russian Air Force, the spectators had an opportunity to watch practically the entire history of aviation over the last 100 years because old aircraft also took part in the show. The oldest plane that rose into the sky today was famous Bleriot XI made by a French designer, who was the first to cross the English Channel aboard his own plane in 1909. Aircraft of that type became the first planes of the Russian Air Force. The Russian Ministry of Defence bought 15 of those planes then and Russian pilots were trained aboard those aircraft until the beginning of World War 1.”

Announcer: The spectators were especially excited by the performance of the best crews from the UK, France, Turkey, Poland, Latvia, Italy and Finland. The stunts brought a storm of applause of the happy audience. The spectators were especially interested in old aircraft of the periods of World War 1 and World War 2. They also enjoyed seeing the aircraft at close range.

The culmination of the festival was the performance of the world famous pilot groups Russian Knights aboard Sukhoi-27 and Swifts aboard MiG-29.