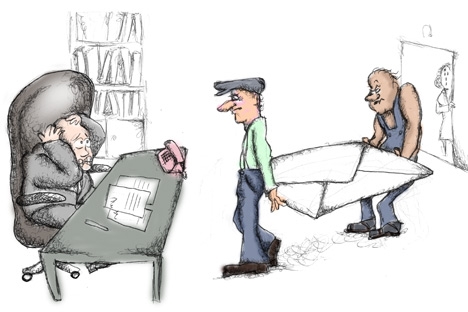 Russian bloggers are again engaged in a fierce discussion on how to beat corruption. In the wake of the debates Valery Fedotov, a member of the United Russia party, proposes an idea how to conquer corruption in Russia.

Andrei Makarevich’s words have over the past couple of days prompted politicians, journalists and bloggers in Russia to turn their attention once again to the subject of kickbacks and bribes. The main outcome of the discussion is that the situation is hopeless and that corruption cannot be beaten. Bribes have been taken since time immemorial and are still taken. And anyway, if businessmen did not bribe officials, there would be no corruption. If they do pay bribes, then they are happy as things are. So, “they have only themselves to blame.”

In my opinion, this is utter rubbish. Overcoming corruption in Russia is realistic and even fairly easy – given the will. All it takes is to introduce a small change in the law: to remove culpability from the bribe-giver if he cooperates with the investigation and gives an honest account of all the details of the crime. Then the problem will start to take care of itself right before our very eyes.

At present, corrupt officials are protected by guaranteed mutual liability. They can demand any kind of sum from you, but if you go and tell the police, then you can be jailed for being an accessory. So you have to pay up and keep your mouth shut.

If, on the other hand, giving a bribe ceases to be a crime, many businessmen who have paid the required “kickbacks” would gladly report the incident to the authorities. This is because few of them pay these bribes of their own accord. Most are victims of  extortion. Once they succumb, they are guilty of bribe-giving and there is no way they can get off the hook.

What is worse, it is becoming increasingly common for officials to take bribes and then fail to uphold their end of the bargain. Under current legislation, there is absolutely nothing bribe-givers can do. If you complain to the police, then you are the one who will go to jail. And it is quite obvious that, if the proposed amendment is passed, these cases will invariably be reported.

Early this week a veteran Russian rock musician, Andrei Makarevich, wrote an open letter to the President in which he criticized the growing corruption in the country and declared: “If the situation doesn’t change dramatically, and soon, then we are heading towards a total catastrophe.” Later, in an interview with the newspaper Izvestia, he said there was no specific motive for him to write the letter at this particular time. “I wrote the letter primarily because the president, in my opinion, is doing absolutely nothing about the situation. It is my duty as a citizen to tell him about it.” Russian President Vladimir Putin did not leave the message unanswered. He advised the musician to write a similar message to businessmen who often initiate such situations. Putin lamented the fact that people who speak about corruption do not come up with effective ideas on how to combat it.

I see no particular ethical problems here. The person who takes the bribe and the person who gives the bribe are in very unequal positions. The former has his official status, wields great power, and the entire state machine behind him. The latter just wants to get rid of the problems created by the former. While the former benefits from the crime, the latter has to part with his hard earned money. How can they be put on the same footing? To understand the absurdity of this logic, let us apply it to any other article of the Criminal Code. Take, for example, rape or robbery. It would not occur to anyone to consider a victim of rape or burglary to be an accomplice to the crime! Why do we do for someone who has been forced to give his money to a bandit threatening to deprive him of the opportunity to do the job he likes?

The experience of other countries shows that the introduction of such legal principles can be very effective. Organized crime was rampant in the United States in the middle of the 20th century.  American law enforcers were well aware of the problem, but could do nothing about it because the mafia was hardly likely to lynch their own. However, after the 1970 Organized Crime Control Act decriminalized the actions of mobsters who testified against their fellow criminals, the situation quickly improved. At present, the mafia in the U.S. has been almost completely destroyed, or at the very least has been driven deep underground. The problem has practically been solved.

The experience of Hong Kong is even more relevant to Russia. In 1974, people who called a special hot line to report acts of corruption were absolved of any responsibility in the crime, even if the caller was himself implicated. The Hong Kong government also stopped considering “corruption due to causes beyond the person’s control” a crime (for example, a businessman who has to bribe an official to get a permit to start his business). By that time, 94 percent of the government sector was riddled with corruption, according to independent research. Today Hong Kong ranks 12th among the world’s least corrupt countries, ahead of Japan, Germany and the UK. All this happened in a little over 30 years.

I am convinced that these measures would prove equally effective in Russia. If a person who has given a bribe can safely report the fact to the police, then corrupt officials will tremble with fear, for the next knock on the door just might the authorities catching up with them. And before we know it, talk of “gratitude” and “interest” on the part of officials will fade out.

It is stupid to say that nothing depends on us and that some fundamental problems cannot be solved. This is the path of losers. Any problem can be solved, given the political will.

Valery Fedotov is a member of the United Russia party.