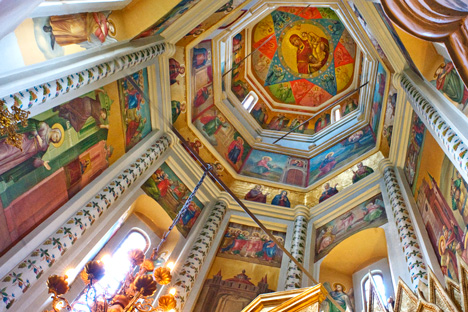 Composed of churches grouped around a central tower, the Cathedral of the Intercession of the Virgin on the Moat, otherwise known as St. Basil’s, has served as a symbol of unifying power since its completion in the mid 16th-century. But it is on the interior that the churches that make up the complex reveal their elaborate complexity.

On the interior the churches of St. Basil's reveal their elaborate complexity. All photographs by William Brumfield

During the 1950s, an examination of the interior of the central Intercession Church uncovered an inscription that proclaimed the dedication of the church on June 29, 1561 in honor of the Holy Trinity and in the presence of the Tsar Ivan IV (the Terrible), the tsareviches Ivan and Fedor, and Metropolitan Macarius. (The surrounding, lesser churches had been consecrated in 1560.)  The restoration of this interior also revealed a geometric decorative pattern.

Most of the interiors of the component churches of the cathedral were painted brick red, with white seams limned to resemble the mortar - a technique known as pod kirpich, or “like brick.” This practice, imported from Italy, was also applied to the brick exterior. The paint not only protected the walls from moisture seepage but also enhanced the color of the surface.  Although at least half of the ensemble's churches later acquired wall paintings, the original brick pattern still exists in some of the interiors. The tops of the chapels usually culminated in a pinwheel spiral on the vaulting beneath the cupola. The interior of the larger Intercession tower (151 feet in height from the floor) has elaborate decoration and culminates with a barely visible image of Mary and the Christ Child.

The primary entrance to the ensemble is the west church, dedicated to the Entry of Christ into Jerusalem on Palm Sunday. The west church can also be seen as a symbol the triumphal entry of Ivan the Terrible into Kazan. The association of the two events – Kazan and Jerusalem –led as early as 1557 to the institution of an annual ritual in which the tsar, led on a horse caparisoned as a donkey, simulated the Palm Sunday procession. The ritual at first was circumscribed by the Kremlin cathedrals, but evidently by 1559 the procession was reoriented beyond the Kremlin to the Trinity Church, under construction as the eastern chapel of the enlarged Intercession Cathedral. The inference is that the new shrine represented the sacred city of Zion. Indeed, the Intercession Cathedral was often called simply "Jerusalem," a designation recorded in the 17th century by Western visitors to Moscow such as Adam Olearius.

Of the other six churches, four were symbolically related to the Kazan campaign. The northwest church is dedicated to Bishop Gregory of Armenia because two major events preceding the Battle of Kazan occurred on his feast day, Sept. 30: the defeat of a sortie of enemy troops on the Field of Arsk, and the spectacular explosion of the Arsk Tower, one of the main bastions of the city. The north tower, dedicated to Sts. Cyprian and Ustinia commemorates the completion of the conquest after the storming of the city the preceding day. The northeast church, dedicated to three Byzantine patriarchs (Alexander, John, and Paul), represents the victory on Aug. 30 over the Tatar cavalry led by Prince Epancha, thus eliminating a major threat to the siege of Kazan.  This battle appears to be commemorated again in the southeast church, dedicated to St. Alexander of Svir.

The remaining two churches - both on the south flank – refer to the tsar's family. The dedication of the southwest church to St. Varlaam of the Khutynskii Monastery near Novgorod commemorates the tsar's father, Basil III, who shortly before his death assumed the traditional role of monk and adopted the name Varlaam. The south tower is dedicated to the icon of St. Nicholas of Velikoretsk (after the River Velikaia in the area of Pskov), a venerated image brought to Moscow; certain monks in Pskov played a role in formulating the mission of Muscovite autocracy.

When all of the original churches are accounted for, there is still the popular name of the temple. Basil the Blessed (1469-1552) was a Muscovite yurodivy – or "fool in Christ" – revered by the tsar himself as well as by the common people for his saintliness, his gift of prophecy, and his courage. By coincidence Basil, or Vasily, died in the year of the taking of Kazan, and a wooden shrine in his honor was erected to the east of the original Trinity Church. The shrine was maintained during the building of the Intercession Cathedral, and in 1588 it was replaced with the small brick Chapel of Basil the Blessed, attached to the northeast corner of the cathedral. Despite the modest size of the church in relation to the surrounding towers, the cult of Basil grew to such proportions as to usurp in common usage all of the cathedral's previous designations, official or unofficial.

The expansion of the Cathedral of the Intercession over the next three centuries began with the addition of the Basil the Blessed Chapel and the onion domes at the end of the 16th century. This process reached its culmination in the 17th century with the enclosure of the terrace. Around 1680, the large free-standing bell tower at the southeast corner of the cathedral was reconstructed in a 17th-century ornamental style, with polychromatic decoration and a tent roof of ceramic tile.  Much of the painted ornamentation on the exterior walls, particularly of the new gallery, was also added in the latter part of the century. The cupolas were brightly painted in a renovation of the cathedral during the 1780s.

As the major cathedral in one of the most populous sections of Moscow, the Intercession, or Trinity, Cathedral – or the Temple of Basil the Blessed, or simply Jerusalem—has stood like a massive outcropping swept by waves of rebuilding and retaining some of the modifications, but never losing the form that celebrated the rise of Muscovy—and Russia itself.