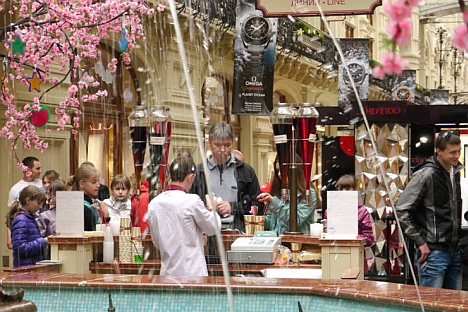 Today’s agenda: a morning tour of the Kremlin, then afternoon with my friend Gennadii, a former school teacher, who lived about 15 minutes by metro from Central Moscow, and dinner at the Café Pushkin, which I loved the last time through.

Beating the Kremlin Crowds, and Other Stops

Sergei suggested we visit the Kremlin first to beat the crowds. I kind of knew what to expect from my prior visit: a trip to the historical museum filled with opulent Tsar carriages and an endless display of dresses from the Federation’s lineage of chubby, promiscuous queens. Unlike the minimum security at St Basils, the Kremlin picture police were in full force. I decided not to push my luck. After the museum tour, Sergei suggested a leisurely walk around the Kremlin grounds dotted with various government buildings, some breathtaking Orthodox Churches and some one-of-a-kind East meets West architecture. (God and the concept of prayer never disappeared during the Communist rule. Stalin realized the strength of the ordinary citizens faith, so he picked his battles wisely).

When we reached the Kremlin, our group was near the front of the queue. Suddenly, 45-50 noisy pushy Chinese tourists led by an even nosier pushy tour guide pushed their way ahead of us. Sergei went ballistic. He said something to the guide. She ignored him. He complained to the guard on duty who also ignored him. Along came two English speaking women with small children in strollers demanding preferential treatment. The guard nodded. As the women passed, one waved her arm in the air. Suddenly, 15 more “yutes” (if unclear, view movie, My Cousin Vinny) pushed their way to the front. I shrugged my shoulders and laughed, “This is just like boarding a Manhattan subway!” Fortunately, the grounds were not just like Manhattan.

The Kremlin is filled with a unique mix of East-West architecture that may not exist anywhere else in the world. Here are a few spectacular examples of Western baroque.

As the tourists dashed to and from the standard Kremlin sights, Sergei said, “Nice spring day, want to meet the people?” And, so it was that we walked around the park near the Kremlin, stopped at a lake where people were fishing and taking family pictures, and walked by a few apartment buildings. In other words, we traveled beyond the stereotypes to touch and feel the everyday life that makes Moscow one of the world’s most vital cities.

While we walked I noticed other happenings that made Moscow—so mysterious to so many Americans—appear like so many other big cities in the world. A couple was taking wedding pictures with the skyline in the background. Their wedding limo was a modest, old yellow car decked out with artificial flowers. Not far from the limo an old-fashioned homemade strip ad was taped to an electrical pole offering a “fast” motor scooter at a “fast price.” Six strips had been removed, so I guessed the seller had takers. I also spotted a colorful recruiting poster for the military reserves and a simple park bench (they still use real wood) to sit and rest while I sipped on a Coca Cola.

As I rested, Gennadii’s text message arrived. “Meet you at the fountain in GUM’s, about 30 minutes.” “Bringing my daughter Katya.”

Sergei gave me directions: “Go through Red Square, turn right, easy you will see.” I got to the outskirts of the square with no problem, but we had both forgotten one minor detail...the square had been cordoned off for President Putin’s Inauguration and then May Day. So made a few aimless rights and lefts. No luck, I was now hopelessly lost. I spotted two mounted policemen were patrolling the area. I waved, they stopped. “Da Angeliski.” They nodded “Nyet.” I uttered the word GUM and shrugged. One policeman smiled and pointed to a narrow, busy street. He pantomimed a series of rights and lefts with his arm. I guessed correctly. Just follow the winding streets and alleys. 10 minutes later I sighed a sigh of relief: GUM stood in front of me.

While waiting for Gennadii GUM felt like numerous American upscale malls: familiar consumer brands, food courts and a yummy ice cream stand adjacent to the main center fountain. According to stories in the New York Times GUM was strictly for Oligarchs and wealthy tourists. Yes, there were upscale shops, but there was also L’Oreal, Gant and a host of average brands. And, the predominant language was Russian, like in moms and dads spending an afternoon with their families.

Gennadii and I hugged like long lost brothers, even though it had only been three years and 30 emails ago. He introduced Katya. We went for coffee and snack. “I made sure Katya had lunch so we could talk uninterrupted.” She spoke a few words of English. I asked if she’d like something from the glass cabinet. She pointed to a baked apple, a cabbage and ham salad, the pasta, a fruit cup and a glass of juice. By the time we reached the table, the tray was heavier than Katya. Gennadii was horrified and embarrassed. “No, No.” Gennadii and I talked for two hours. Katya ate absolutely everything, then went outside to play on the carousel.

Gennadii had a number of interesting observations.

On the emerging middle class: We have jobs, make enough to enjoy our new life style, but not enough to save. But, then again that will come.

On the merging social democracy: People are becoming more comfortable with life in general because everyday matters are more predictable.

On politics: I voted for Putin because he understands what ordinary Russians want, and most importantly, how to deliver.

On adversity: We are a proud independent, determined and resilient people. We accept adversity as a way of life: look at our weather, our traffic.

On tourists: Despite the fact that they (American tourists in Russia) are the more well-to-do and theoretically, more internationally-savvy Americans, they seem genuinely surprised we have modern supermarkets, clothing stores, pharmacies, ice cream and pancakes!

On stereotypes: It will probably take generations before our respective countries get to know each other more respectfully. Attitudinal baggage is difficult to eliminate.

After three hours of listening and respecting each other’s candor, two things became apparent: we are not very different... and yet we are very different. I can only hope my sons, and their children do a better job at bridging gaps in our respective cultures than we have (and will) in my lifetime. It was time to part. So Gennadii insisted we walk to the metro and visit Moscow’s financial district along the way.

Oh No, Not Again!

I told Gennadii of my reluctance to use public transport, since I had been horribly lost twice two connective days. He assured me my Metro ride would be different, “So, so simple. Only three stops on the green line to Prospekt Mira then a five minute walk. He agreed to be videotaped in case something went wrong with “so, so simple.” I was supposed to be a joke! I also asked Gennadii how to say “where is,” just in case the unimaginable occurred. He laughed. We practiced the word about 15 times. I felt like I was now fluent in Russian, after all I could now speak 10 words…

Good news/bad news. The Good News: Gennadii was “partially correct.” It was only three stops to Prospekt Mira. The Bad News: There was no Renaissance Marriott anywhere in sight. As I wandered, I stopped a number of pedestrians, showed them the hotel’s business card and uttered “gde? (where?)” I could have been talking in Morse code, everybody shrugged their shoulders.

I remembered my evening with Artem and Eva. I thought what the hell have I got to lose. I walked out on the busy boulevard and raised my hand. Two minutes later an unmarked black BMW stopped. I showed him the car, he nodded and wrote 400 on a sheet of paper. I nodded, and away we went. 20 minutes later I was proudly walking into the lobby of the hotel. The experience taught me a few things: Artem was right; the car that picked me up the first time I got lost ripped me off; never take the Moscow Metro alone; and it’s wise to learn more than 10 words of Russian if you want to self-tour Moscow.

It was almost 9 p. m. when I walked into the hotel. I decided I wasn’t even going to look for David and the group. I had a beer, put in an 8 AM wakeup call and went to sleep. The phone a few minutes before 8 a.m. It was Gennadii, “Matt, I am so, so, sorry. I did not realize there was three Marriotts. I always thought there were two. I called you late last night, but no one answered I was worried.”