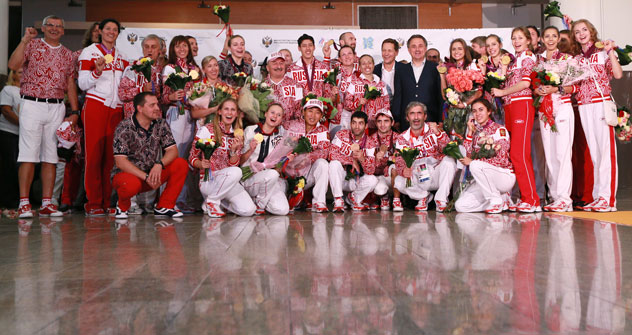 Given the fact that Russia managed to finish with 24 gold, an equal number of silver medals and 33 bronze medals, taking the final tally to 82 medals. Source: Ria Novosti

A sluggish start and early disappointments had many predicting doomsday for Russian sport and then came the surprises that took Russia to 4th place with a tally of 24 gold medals.

Even the most optimistic of fans didn’t expect Russia to outperform the heavyweights of the Summer Olympics, China and the United States, but the first week was particularly agonising given how low down the medal chart Russia was. There was a lot of muttering in the blogosphere with funny tweets in Russian about the performance of the contingent in London. But if one moment changed the whole complexion of Russia’s performance at the games, it was Arsen Galstyan’s judo gold medal.

Galstyan’s medal took away the pressure (and attention) from the rest of the Russian contingent and all of a sudden, the London Olympics were all about the judo success. The other 2 judo gold medals (and the silver and bronze) made Vladimir Putin’s favourite sport the talking point of the games in Russia. This diversion of attention spurred on the other athletes to perform under less stressful conditions.

How many of us really expected the Russian volleyball team to win the gold? I watched that thriller of a final against Brazil thinking that I’d be proud of the team no matter how the match ended. The writing seemed to appear on the wall after Brazil won the first 2 sets and had 2 match points. The Russian team, though, had other ideas and displayed nerves of steel to put up one of the greatest performances in the history of the sport to defeat their much-favoured rivals. This was the first volleyball gold for the country since the 1980 Olympics in Moscow.

Some gold medal hopes for Russia fell short at the final stage. An Olympic Gold would have been the icing on the cake of Maria Sharapova’s career, but it wasn’t meant to be. Serena Williams was definitely the better player on the day and when she plays the way she did in Wimbledon, no force on earth can stop the American legend. Serena, who belongs in the list of all-time greats along with Martina Navratilova, Margaret Court and Steffi Graf, could easily defeat most of the male players on court.

Russian fans also wanted Elena Isinbayeva to ride off into the sunset with a gold medal. It would have been a fairy tale ending pole vault legend to win her third gold in a row and call it quits, but she had to settle for a bronze. Isinbayeva has hinted that she wants a final gold in Rio in 2016 and we can only wish her the best.

There was also a lot of disappointment for fans of Russian weightlifters and swimmers. These are sports where Russia has been traditionally been very good at. Maybe President Putin can popularize these sports and become a catalyst for them, the way he has been for judo!

Russia went high up in the medals tally in large part because of athletics. The athletics events at the London Olympics were just about 1 person: Usain Bolt. By the look of things, no one seemed even remotely interested in the events that the Jamaican sensation wasn’t involved in. Again, away from public attention, Russian athletes managed to shine in London, bringing home 8 gold medals. Before the 800 metres event, all the global attention was on South Africa’s “controversial” athlete Caster Semenya. Mariya Savinova, who won gold at the World Championships in South Korea last year, would have been relieved to be away from the spotlight as she raced to gold, a victory that remains one of the highlights for Russia at the Olympics.

From the gold medal haul, if there was one victory that stood out for me, it was Russia’s last gold medal, the volleyball victory, which will be talked about for generations among sports fans both in Russia and Brazil.

Given the fact that Russia managed to finish with 24 gold, an equal number of silver medals and 33 bronze medals, taking the final tally to 82 medals, which was good for a 4th place finish, there are enough reasons to celebrate. Russia deserves a B plus for its performance in London.

The preparation for Rio 2016 begins now and London’s highs and lows are a great starting point to form a strategy to compete with the likes of America and China.