The Voice of Russia
Pershkina Anastasiya 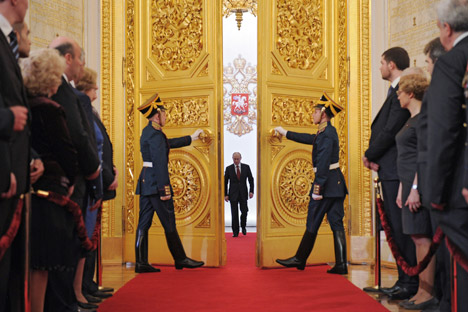 "The fundamental task for Putin is to make a cross on the economic model that has emerged over the past 12 years under Putin himself," said political analyst Pavel Sviatenkov. Photo: Reuters / Vostock Photo

At the same time, quite a few changes have been made – or, rather, outlined – in Russia’s relations with foreign countries within these 100 days. Within these days, President Putin has paid official visits to 11 countries, including Germany, France, the UK, Mexico and Israel.

Soon after his new advent as president, Mr. Putin issued a number of decrees, which introduced considerable changes in domestic policy. Meanwhile, in foreign policy, Russia did not conclude any global treaties within this time. However, it looks like Mr. Putin is considering to makeserious changes in Russia’s foreign policy as well, but hasn’t yet decided what exactly they would be. He seems to be trying to take a closer look at the top figures in the current world’s politics, considering with what countries Russia should cooperate in the first place and with what – in the second.

“At the same time, in some points, Russia’s position hasn’t changed and, most likely, won’t change,” the Editor-in-Chief of the Russian magazine “Geopolitika” Leonid Savin says.

“Although President Putin has made several steps in foreign policy within these 100 days, neither of them introduced any global changes in Russia’s relations with other countries,” Mr. Savin says. “What currentlyconcerns Russia most of all is the situation in the Middle East. According to recent statements of the Russian Foreign Ministry, Russia’s position in this sphere remains the same.”

As it has been already mentioned, recently, Mr. Putin made several official visits to European countries. But his aim during these visits was more to get acquainted with the current situation in these countries than to undertake any concrete steps. In Paris, Mr. Putin got acquainted with France’s new President François  Hollande. The visits of the Russian president to Germany and the UK were rather formal, besides the fact that the problems of the eurozone and the Litvinenko case were discussed during these visits.

However, one step that Vladimir Putin made in the very beginning of his third presidential term surprised many people. Namely, Mr. Putin didn’t go to the G8 summit in Camp David. Instead, the former president, Dmitry Medvedev, whom Mr. Putin appointed Prime Minister several days before that, went to the summit.

“I believe that by this step, Mr. Putin showed that now, the Russian-US relations will be a bit less active than they were in the time of Mr. Medvedev’s presidency,” Russian analyst Evgeniya Boyko says. “When Dmitry Medvedev was president, relations with the US were one of the top priorities of his foreign policy. So, Vladimir Putin probably decided that it would be better if Mr. Medvedev continues to be responsible for the relations with the US.”

However, Mr. Putin did meet with President Obama within these 100 days – although not in Russia or in the US, but during a summit of the G20 in Mexico. By this, Mr. Putin showed that Russia still wants to have good relations with the US, but these relations won’t be a priority for Russia any more.

“Now, Mr. Putin wants Russia to cooperate mainly with China and Central Asian countries like Kazakhstan and Uzbekistan,” Ms. Voyko continues. “He visited Kazakhstan and Uzbekistan in early June. Mr. Putin also wants to make sure that the cooling of relations between Russia and China, which has been witnessed for some time because of the two countries’ competition as to who would deliver oil and gas to Central Asian countries, is now over. Mr. Putin wants it to be confirmed by China that on such burning issues as Iran’s nuclear program and the situation in Syria, the positions of China and Russia coincide. The Russian president hopes that Russia and China will form a block of countries that will have its sound say in the world’s politics, where, until now, Western countries have been dominant.”

To persuade the world to respect Russia’s say, President Putin recently announced that Russia is starting a policy of so-called “soft power”.

The term “soft power” means a policy when a country persuades other countries to respect it not by putting pressure on them but by creating a better image of itself, an image of a democratic and cultural state.

The term “soft power” – and the phenomenon it refers to – is believed to be an invention of US diplomacy. Well, very soon US politicians will see how Russia is trying to apply their invention in its own foreign policy.