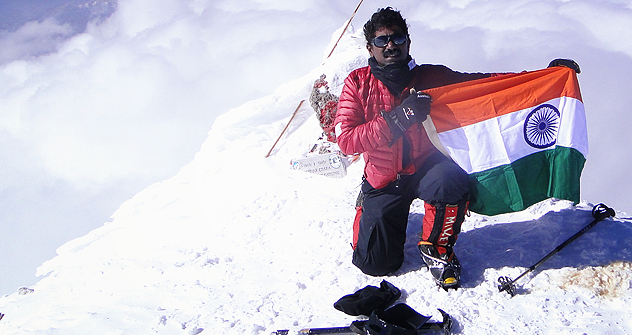 A postgraduate from the prestigious Indian Institute of Management, Calcutta, Malli Mastan Babu summits the highest peak in Europe for the third time.

Malli Mastan Babu, who is originally from Gandhi Jana Sangam, a small village in the southern Indian state of Andhra Pradesh, has a passion for mountains. He is in the Guinness Book of World Records for scaling the highest peaks of the seven continents in 172 days. As India marked its 65th independence day, Babu was climbing Mt Elbrus, the highest peak in Europe (5642 metres above sea level) after scaling it twice in the past.

When asked to share his first mountaineering experience, Babu spoke of a memorable day in his childhood, while growing up in the Gandhi Jana Sangam village in Andhra Pradesh. “Our village was a perfect place for venturing out into nature, with its picturesque hilly landscape. Among other children, I was eager to collect more wood for the fire for the Makar Sankranti festival and I was so drawn by the hill that I didn’t realise how I climbed on top of it. You know, with mountains, it’s like this: they seem very close, and then you start climbing and they move farther.” The first hill was scaled when Malli was 7.

A few years later, with his school being affiliated with the Ministry of Defence of India, Malli happened to meet a person who was part of the Indian Army expedition to the Himalayas in 1985. This army man’s feat was inspirational and Malli told himself that he would repeat it one day. “It took me 20 years to garner courage and self-conviction to scale Everest,” Malli says.

At the age of 15, Malli scaled his first Himalayan peak. It was just 10,000 feet, something that pales in comparison to the staggering heights that lay in store for him. Describing his feelings at that special moment in his life he says, “I was engrossed. I tried to express myself more. It felt as though I was touching my soul.”

While in university, Malli was very much into athletics and swimming. He joined an adventure club, and kept boosting his fitness during the college years, when he studied engineering.  Malli’s 2 years at the prestigious Indian Institute of Management, Calcutta, where he obtained an MBA, drained him of a lot of energy.

The appeal of the mountains was so strong for Malli that he gave up a successful career in Information Technology and vowed to scale seven peaks in seven continents. And he did scale the highest seven peaks of the seven continents in just 172 days (from January 19 – July 10, 2006), setting the World Record as the fastest man to summit all 7 peaks.

“Climbing a mountain is not an easy deal,” says Malli. “It takes about 12 hours to get up a Himalayan track and 6 hours to go down. To develop stamina, I practiced long-distance running: at first, it was just 6 kilometres, then 15-16 and, finally, I could do a 42 kilometre run.”

There is much to learn apart from simply being physically fit to be able to scale a mountain. “You have to learn the skill of walking in snow and ice because that’s part of mountains, and be able to keep your balance,” emphasises Malli. “You also have to consider gravity and friction, which is quite different from what you experience walking on the flat surface.”

It’s hard to believe that with so much to learn Mali enrolled just in one-month long basic climbing programme and didn’t have a personal coach. But he says he was in a good physical shape, and with his ability to focus, determination and passion for climbing he enhanced the necessary skills on his own.

As for building mental strength, which is vital for mountain climbing, Mali says, the Vipassana meditation technique helped him a lot. According to him, 10 days of not talking or even making eye contact to any member of his group required by this meditation practice was a good way to acquire self-sufficiency so important during solitary mountaineering.

Mali says he had mixed reactions from his family and friends towards his ambitious goal of summiting seven mountain peaks on seven continents, “My family was very protective, they were worried for me,” shares Mali. “As for the friends, some of them expressed caution. Others saw the fitness I displayed as an athlete and believed in my success.”

When I asked Malli at what age he conquered Everest, he gently corrected me: “Not conquer, summit!” He added with conviction, “with mountains you can’t be arrogant. It’s a mountain that allows you to ascend it and to stand on its summit for a little time.”

For Malli, mountaineering became more than a hobby but rather a life-transforming experience. “It taught me to prioritise, to say no and to gain strength… it helped me become more satisfied with my life,” he says. Staying tete-a-tete with nature taught him many lessons. A very important one was not to succumb to the pressure from other people and remain true to oneself. “We try to live our lives to satisfy external society requirements. And in experiencing mountaineering, you don’t have to wear any layers. You are more comfortable with yourself.”

On May 21, 2006, Malli scaled Mount Everest and then in the first week of June, he flew to Russia. On June 13, he fulfilled his long-time dream and climbed the Elbrus peak for the first time.

Climbing Elbrus was a tough experience for Malli even after scaling Everest.  Compared to scaling the peaks of the same altitude in the Himalayan climate, the impact of the Arctic adds to the hardships of the Caucasus Mountains.  Malli explains: “Everest was the most difficult climb of all. But Elbrus wasn’t an easy ride either. The winds are really harsh, especially in February. I was afraid I could get blown away by the wind so I was holding on to the rocks when it got strong.”

But the real challenge for Malli was the Russian language. “Mountains speak the same language everywhere,” Malli says with a smile. “But with people it’s more complicated. It took me a while to learn to understand people and make myself understood”.

Unsurprisingly, the very first Russian word Malli learnt was “al’pinist” (mountaineer).  Now Malli can converse in Russian a little and is determined to build up his vocabulary. Malli is fascinated with Russia and is planning to undertake a longer travel about three to four months around the country. “There are so many interesting aspects to learn more about: mathematics and scientific achievements, athletics, gymnastics and of course its rich history and culture. This country has been hit by wars so often and yet every time its culture is revived,” Malli says with enthusiasm.