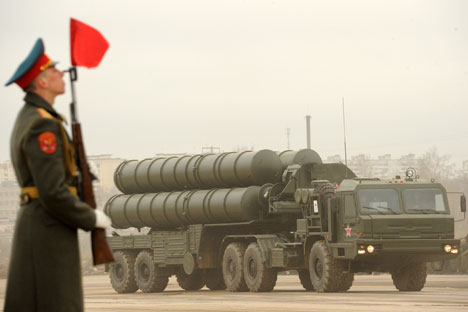 Moscow’s refusal to deliver the S-300 missile system brought about the lawsuit from Iran. Pictured: A Russian surface-to-air missile system S-300 PMU2 Favorit rolls during a rehearsal of the Victory Day Parade in Alabino, outside Moscow, on April 18,

Tehran is claiming breach of contract after Moscow failed to deliver the S-300 missile system; Russia says it will stop backing Tehran in the international arena unless the lawsuit is withdrawn.

Iran has filed an almost $4 billion lawsuit against Russia at the Geneva Court of Arbitration over Moscow’s refusal to deliver the S-300 surface-to-air missile system. In turn, the Russian government has declared that it will stop backing Iran internationally unless the lawsuit is dropped.

A source in the Russian government said: “We have been supporting them by taking a constructive stand in the talks on the nuclear issue, yet that’s how they are paying us back.” The source called the lawsuit story unseemly and the Iranians ungrateful. According to a source in the Russian presidential administration, Moscow’s position has become even tougher by shifting the matter of the lawsuit from the judicial into the political dimension.

“We have already made it clear to Iran that lawsuits are not helping the development of our relations, but our requests to retract these documents from the court went unnoticed,” the source said. He added that this had forced the country’s leadership to take counter steps: Moscow is prepared to stop supporting Tehran over its nuclear program. “Prior to the next session of the six international mediators, we will try to make our position heard once more by sending a government delegation to Tehran. And if Iran once again refuses to do so, it will have to sort out its nuclear issues in the international arena on its own,” the Kremlin official said. A source at the Russian Foreign Ministry confirmed that this was the line its diplomats had been instructed to take in their dialogue with the Iranians.

Russian officials are hopeful this tactic will work, as Iran is in desperate need of Russia’s support on the international stage. EU Foreign Policy Chief Catherine Ashton said last week that the next round of negotiations addressing the Iranian nuclear program would be held in late August. No date has yet been set for a Group of Six meeting, but on Aug. 22 Vienna is expected to host talks between Iranian officials and representatives of the International Atomic Energy Agency Secretariat, according to a source close to the IAEA Secretariat. This meeting will be largely decisive for the fate of the dialogue in the Group of Six format.

After the most recent full-scale Group of Six meeting in Moscow, which yielded no results, a source close to the American delegation said that the U.S. saw no point in any further attempts to find a diplomatic solution to the problem, betting instead on stepping up the pressure through sanctions. If the negotiations were to cease altogether, it would definitively convince the Israeli “hawks” that a strike against Iran was in order.

Moscow has always opposed sanctions, instead favoring negotiations with Iran. “Russia’s position, which it has reiterated at every forum, is that the Iranian problem should only be resolved by diplomatic means.  Iran has benefited from all of this,” said Alexander Kolbin, an expert at the PIR Center.

Some Iranian officials have been making attempts to mitigate the fallout from the lawsuit. Iranian Ambassador to Russia Seyed Mahmoud Reza Sajjadi said that Tehran was looking to recover $900 million from Russia, not $4 billion, while the extra $3 billion was a “punishment for Russia” added by the Geneva Court of Arbitration “without the knowledge of the Iranian side and against its will.”

The Geneva Court had no immediate comment on the situation, although several lawyers agreed that it was inconceivable for a court of arbitration to modify a claim or determine damages before handing down a ruling. “The arbitrators cannot comment on the merits of a case prior to ruling on the claim,” said Denis Arkhipov, a senior associate with the Egorov, Puginsky, Afanasyev and Partners law firm.

Experts believe that the size of the claim could only have increased if, in addition to the $900 million (which is the value of the S-300 contract), Iran had sought damages to its business reputation or moral damages and had asked the court to determine these at the court’s discretion. Rajab Safarov, Director of the Center for Modern Iranian Studies, a think tank with close ties to Tehran, has suggested that Iran would like to have Russia pay penalties on contacts dating back to 1995, “when the military and technical cooperation between Russia and Iran was effectively frozen.”

“Whenever the amount of damages is left to the court’s discretion, the arbitrators will put a value on the claim in advance, in order to determine the arbitration fee,” said Dmitry Chernyakov, managing partner of the Muranov, Chernyakov and Partners law firm. He added that this was done in order to rule out disputes over the fee and to turn away frivolous plaintiffs. “The arbitration fee is deposited with the court in advance as a pre-requisite for appointing arbitrators andcommencing the trial,” Chernyakov said.

All of this indirectly suggests that the significant increase in the size of the claim could not have happened without Iran’s knowledge.

Moscow still hopes it will not have to roll out its big diplomatic guns. “The negotiations were off to a rocky start but we are still hoping for an amicable, out-of-court settlement,” another Kremlin source said.

The contract for supply of the S-300 air defense systems to Iran was signed in late 2007. Russia was to deliver five batteries of the S-300 PMU-1 anti-aircraft missile system worth around $800 million, but former Russian President Dmitry Medvedev signed a decree on implementation of the fourth UN Security Council sanctions resolution of June 9, 2010, which banned transfer to the Islamic Republic of the S-300 systems, armored vehicles, combat airplanes, helicopters, and ships.

The United States, a number of other Western countries, and Israel all suspect Iran of developing nuclear weapons under the cover of a peaceful nuclear program. Tehran has denied the accusations, insisting that its nuclear program is intended exclusively for meeting its electric power needs. The UN Security Council has adopted four resolutions imposing sanctions on Iran. In addition, several countries and organizations have unilaterally passed a number of resolutions demanding full transparency of Iran’s nuclear program and proof of its purely peaceful purposes.

This article can be read in the original Russian in Kommersant Daily.