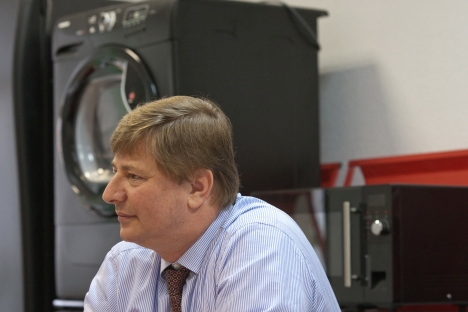 Candy Hoover Group CEO Aldo Fumagalli: We decided to start our own production in Russia to protect our business. Source: ITAR-TASS

The Russian market for household appliances virtually collapsed in 2008. A 40 percent drop in sales was reported by manufacturers the following year. However, the market has since recovered to pre-crisis levels, and is even showing signs of growth, in contrast to Europe, where sales fell at a slower pace, but have struggled to recover.

Margarita Parfenenkova of RosBusinessConsulting talked to Candy Hoover Group CEO Aldo Fumagalli about the company’s new investments in Russia, the advantages of Russian-made appliances over imports, and the growth outlook outside the European Union.

RosBusinessConsulting: Why did you decide to purchase an existing washing machine factory in Russia rather than build one from scratch?

Aldo Fumagalli: We started selling our products in Russia back in the early 1980s and, as our sales grew, we realized there was a risk of the government gradually clamping down on us – by introducing high customs duties for example – to protect domestic manufacturers. That’s what had happened with refrigerators when rather high import duties were introduced.

Around 2005-2006, we decided to start our own production in Russia – it was one of the steps aimed at protecting our business. We had two options: We could either build a factory from scratch, or buy an existing one. At the time, there was only one factory in Russia that manufactured front-loading washing machines, and that was the Vesta factory in Kirov, which produced the Vyatka model.

The factory employed reasonably skilled and intelligent people. But to tell the truth, their product was totally obsolete, as was their equipment, so we had to invest a lot in new production lines. All in all, we spent some €30 million ($37 million) on the acquisition of the factory and new equipment.

RBC: And how much would it have cost if you had built it from scratch?

A.F.: We would probably have spent less, because we wouldn’t have had to buy the whole company. But we don’t think the additional money we spent was wasted, because we actually bought a going concern. Had we started from scratch, we would have had to recruit and train about 300-400 skilled workers, which would have taken at least two or three years. But once we came to Vesta, it was all pretty straightforward from there. We shut the factory down for six months, brought and installed new equipment, and launched the new facility.

RBC: Why did you then abandon the Vyatka brand?

A.F.: Let’s just say we froze the use of the brand. That is, we literally put it in the freezer. Perhaps we will use it in the future, or re-launch it. But for now, we are focusing on two brands in Russia: Candy and Hoover.

RBC: Do you supply appliances made in Kirov to other markets or countries outside Russia?

A.F.: In general, most of Kirov’s output is intended for the Russian market only. But we do have one very particular product – a narrow washing machine, 33 cm (13 in) wide – which is only manufactured in Russia at the moment and is exported all over the world, anywhere where Candy has a presence.

RBC: You are also going to start making refrigerators. What prompted this decision? Will it require additional investments, or an expansion of the factory?

A.F.: It’s just a plan at the moment. And it depends, among other things, on the degree of support we receive at the local level. We would like to start next season, if everything goes well. The investment will be considerable, double the amount that we have invested in the manufacturing of washing machines. It will be exactly the same as what we spent in the Czech Republic, where we have a refrigerator factory.

RBC: Where does the Russian market stand for you in terms of sales?

A.F.: Russia ranks sixth now. We believe that, after we launch the refrigerator factory, Russia will move up to fourth.

RBC: What are the markets that bring you the highest revenues?

A.F.: The UK is number one, followed by France, Italy, China, and Germany.

RBC: How did the markets where you are present perform during the crisis, and how did they emerge from it? Has consumer activity returned to its previous level?

A.F.: In 2009, the entire European market fell by around 14 points. The crisis started towards the end of 2008 with the bankruptcy of Lehman Brothers. Each country behaved differently. For example, Russia’s market collapsed entirely, as sales shrank by 40 percent in 2009, only to recover to pre-crisis levels quite swiftly. That is, indicators in 2010-2011 returned to pre-crisis levels, to where they were in 2008.

While in many European countries the market didn’t fall as precipitously, it has yet to recover to pre-crisis levels, and still remains quite weak. This is mainly due to the fact that, as you know, many European countries are suffering from economic problems of their own, starting with Spain and ending with Greece. Italy also has its share of domestic economic troubles, as does Portugal.

The European market is now at the 2002 level. And we are very fortunate to have acquired companies outside the EU before the crisis started. In addition to Russia, we have made sufficiently large acquisitions in China and Turkey. And this has helped us offset the losses we suffered in Europe.

RBC: Europeans are not prepared to spend money on replacing major home appliances at the moment. In what countries are consumers most active, and where does Russia stand in this ranking?

A.F.: In general, purchasing large appliances is connected with two processes: either building a new house or moving to a new apartment. Both processes are now struggling in Europe. That’s why the market is so depressed. Russia recovered to pre-crisis levels fast enough and, in general, the local housing market is strong now. New homes are being built; people are buying new apartments and new appliances.

Take other countries. China and Turkey are rapidly growing markets. Our work there has been very successful. In China, this has to do with a targeted government policy; people qualify for certain discounts and exemptions when they buy locally made products. Turkey on the other hand has a high birth rate.

RBC: So Russia’s market is actually lagging behind?

A.F.: Overall, the situation in Russia is excellent. We are growing. The overall market growth is helping us. I can’t say that we are outperforming the market, but we are growing together with it, at the same pace.