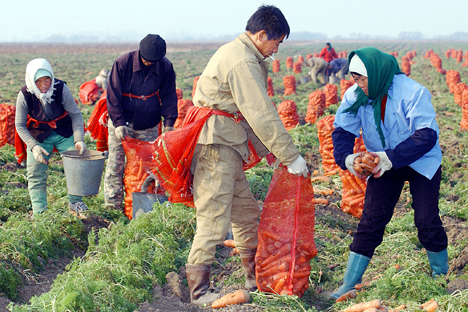 “Migration processes are permanent, and we should not be afraid of them," said Russian Prime Minister Dmitry Medvedev. "On the contrary, we should learn how to manage them effectively." Pictured: Chinese migrants taking the harvest in Russia's Far Ea

Russian Prime Minister Dmitry Medvedev has called for migration management strategy to be radically altered, saying that the Far East should be protected from excessive inflows of foreigners.

Speaking at a government meeting on Aug. 9, Russian Prime Minister Dmitry Medvedev urged Russians to not be afraid of migration, but to learn to manage migration processes instead. At the same time, he insisted that Russia should prevent the emergence of ethnic enclaves on its territory and restrict excessive inflows of immigrants.

“Migration processes are permanent, and we should not be afraid of them. On the contrary, we should learn how to manage them effectively. The main objective is to create a civilized and balanced labor market, something that we have failed to do so far, and provide our economy with a skilled workforce,” Medvedev said.

Medvedev said that first of all, Russia should aim to attract foreign workers with skills and professions that are either in short supply or in high demand, but not at the expense of Russian citizens. He said that in the first half of 2012 alone, more than 8 million foreign citizens came to Russia.

Medvedev also said that Russia had adopted a concept for its migration policy up to 2025, which aims to improve the management of migration processes.

“All of the arrangements outlined in the concept should be aimed at strengthening law and order, at introducing harsher punishments for those breaking migration rules, including criminal prosecution. On the other hand, this work should also aim to provide additional preferences for skilled and in-demand foreign workers who abide by the law,” Medvedev said, calling for state officials to encourage migration by foreign entrepreneurs, professors, scientists and students.

At the same time, the prime minister admitted that there were some problems with immigrants. “It is important to avoid possible negative consequences, like the formation of enclaves of foreign citizens,” he said.

He went on to comment on the situation in the Far East in particular. “The Far East is not very densely populated and, unfortunately, we are still faced with the challenge of protecting our territories in the Far East from excessive expansion from neighboring countries,” Medvedev said.

Russian President Vladimir Putin also spoke about a new migration policy concept in mid-June when he also suggested that the Federal Migration Service make proposals to tighten migration regulations. Previously, the service had proposed increased sentences for the organization of illegal migration.

In southern of Russia, the migration of Russian citizens from one region to another rather than an influx of migrants from foreign countries is at the top of the agenda. Krasnodar Region Governor Alexander Tkachev has announced the creation of special units to control mass inflows of migrants from the North Caucasus. “Look at the Stavropol Region – our neighbors, our brothers, and we see that the sense of commonness, solidarity and cultural legacy has been lost there. These lands will be easily veiled by other ethnic communities, primarily those coming from the Caucasus. Because they are close, they integrate into Stavropol Region, and we see that the number of immigrants (driven by business, economics and family ties) affects the quality of life. Essentially, Russian people do not feel comfortable there any longer,” Tkachev said.

Experts have been critical of Tkachev’s comments. “Tkachev has effectively called for the breakup of the country. He regards the North Caucuses as a hostile foreign territory and is demanding that his land be fenced off using illegal armed formations,” said Alexander Sokolov, member of the Public Chamber.

Speaker of the Chechen parliament Dukuvakha Abdurakhmanov shares this opinion. “Such statements not only run counter to the fundamentals of the Russian Constitution, which grants every Russian citizen freedom of movement and residence, it also insults all the ethnic groups living in the Caucasus,” he said.