The Voice of Russia
Natalya Kovalenko 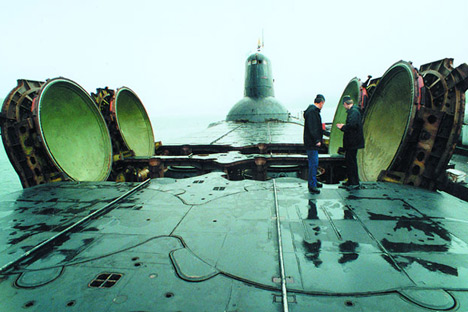 This summer, an Akula-class submarine equipped with long-range ballistic missiles entered the Gulf of Mexico unnoticed.

Without breaking international law a Russian nuclear-powered submarine successfully accomplished its training mission near the coast of the United States. The submarine, which is equipped with long-range cruise missiles, shuttled for one month in the Gulf of Mexico without being detected by the U.S. Navy; the Washington Free Beacon reported citing unnamed high-ranked sources in the Pentagon. The American Navy detected the submarine only when it was leaving the waters of the Gulf.

Without violating international law and the sovereignty of another state, the Russian Navy managed to accomplish several tactical and strategic tasks. First, the crew completed a successful training mission. Second, the Russian military forces received data about the routes of American submarines and ships in the Gulf of Mexico. Russia also showed America that an absolutely flawless security system does not exist, Vladimir Yevseyev, head of the Center of Social and Political studies, said.

"This is a good lesson for the U.S., demonstrating that it should not pursue its foreign policy interests all over the world using force,” Yevseyev said. “Other states also have some military potential. If the U.S. pursues its national interests only by means of force a boomerang effect will take place,” he added.  “The U.S. should realise that it is also vulnerable because the anti-missile system is not efficient enough when it comes to cruise missiles, that can fly at low altitudes. Nuclear submarines carry cruise missiles that cannot be detected using conventional means designed for repelling ballistic missiles attacks. Cruise missiles create a breach in anti-missile defense. They show that an ideal anti-missile system does not exist. This destroys the image of the US’ invincibility, which backs its policy of all permissiveness on the global arena.”

While Russian military experts are congratulating each other on the successful mission, the American inability to spot a submarine aroused concerns in the military circles. So far there have been no official statements from Washington and the Pentagon. It is, however, unlikely that the information leak was accidental. By disclosing this information the Pentagon is trying to convince the Congress not to reduce expenditure on military needs, Alexander Kramchikhin, expert with the Institute of political and military studies, says.

“I don’t doubt that this information was disclosed in connection with the budget,” Kramchikhin says. “Now significant cuts of the U.S. military budget are under way and this campaign is aimed at preventing budget cuts in the Navy.”

Akula is a multi-purpose submarine of the Russian Navy, which is distinguished by a high level of stealth. Russia has produced 15 submarines of this class and transferred one of them to India.