Aryan settlements in the Urals: A precursor to Indian Civilisation? 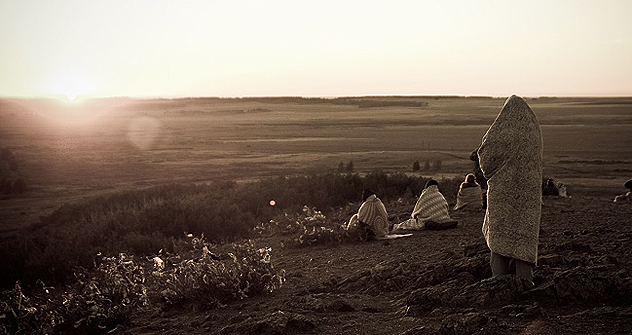 Strong archaeological evidence suggests that Aryans lived in Arkaim, by the Urals, before they went to India via Central Asia.

Every year, thousands of people make the pilgrimage to Arkaim, a place that presents strong evidence that “Russia is the Motherland of the Elephant” and that Aryans, the architects of the ancient cultures of India and Iran, built fortresses on Russian territory and roamed the land in their chariots thousands of years before the birth of Christ.

In 1987, the Arkaim Valley was destined to become a giant reservoir. A dam had already been built, and archeologists were busy wrapping up exploratory works, the kind that are always performed ahead of such operations. It was at this point that a group of young hunters found something strange in the steppe.

After following up on the hunters’ lead, the archaeologists immediately knew they had stumbled upon something big the moment they had an aerial view of a giant figure made up of nested circles with lines radiating from the centre. The figure looked like an Indian Mandala (a sacred symbol of the realm of gods in the Buddhist and Hindu religious traditions), or a wheel with spokes. Incidentally, the military had known about Arkaim since the 1950s, but never told scientists, for some strange reason.

But these associations with the mandala and the wheel were not immediately evident. It was only later that experts began to suspect that the ancient town had been built by the very same people who had invented the mandalas – the Aryan tribes that invaded India and Iran a few centuries later in their war chariots and gave the world two great ancient religions, Vedic Hinduism and Zoroastrianism.

The scientists managed to protect Arkaim and prevent the valley from being flooded. In the early 1990s, it became clear that, 500 years prior to the Trojan War, in the times of the Egyptian pyramids and the rise of Babylon, there was a country of some 20 towns in the Southern Urals, each of which had its own breathtaking citadel.

“The Uy River seems to form a natural boundary between the forest-steppe and the steppe. That’s where the Aryan lands begin,” says Gennady Zdanovich, who heads the expedition that excavates the Country of Towns, looking solemnly into the fog. “The Aryan expanse – that’s where their burials mounds are.”

We cross the Ural River, the border between Europe and Asia. “We have the world’s earliest chariots, which were built a thousand years prior to the Greeks. They’re two-wheel horse-drawn war carts,” Zdanovich says.

We are walking down Lesnaya (Forest) Street. An odd name for a street – there are no forests here! They could have named it Aryan Street or Zoroaster Lane. Sergei Malyutin, our guide in modern and ancient Arkaim, is the youngest in a long line of archaeologists in his family. He grew up in Arkaim.

“In the early 1990s, we had an idea that seemed progressive for that time – to create an ethno-cultural museum, an outdoor museum that would incorporate tourism, education and research, Malyutin says.

Lesnaya Street eventually leads us to a forest, the drunken forest, as they call it here. The birch trees bend and crawl, resembling somewhat the final stages of a Russian man’s drunken night out.

Thousands of years ago, Ognenny Volcano was on this spot. The camp is in its crater, surrounded by hills that, oddly enough, are called mountains – Shamanikha and Love Mount. The names were given by mystic-minded tourists, and they caught on.

“An eco-museum is not just a building with show cabinets,” Malutin says. It turns out that the museum is the steppe around the camp itself. If you take a few steps away from the campsite, you will come across the Stone Age homes reconstructed by the archaeologists. Believe it or not, people used to live in pretty decent homes back in the Palaeolithic age. The foundation of the home is formed by thousands of horse bones (horses were not domesticated then and were hunted for meat) instead of stone, which has always been in short supply in the steppe. The famous caves with Paleolithic drawings on the walls were not actually inhabited, but used for ceremonies and rites.

If you take a walk in the opposite direction, you will see a nomad tent, or yurt, as well as Kurgan stelae and a burial mound with dummies that represent dead bodies. This is the Iron Age, the time of the Scythians. The archaeological findings dating from those times always include horses (the Scythians invented the stirrup), weapons and aggressive “Scythian animal style” art.

“We take the stuff that can be destroyed in the steppe,” Zdanovich says. ‘We want to create a museum dedicated to all the ethnic groups that used to live here.” The ancient land that we stand on has just as much history as Jerusalem. The only thing that looks odd on the local map is the name of the village of Parizh (Paris), which was named in honour of victory in the 1812 War, in which local Cossacks fought.

There are no artefacts in the place where the ancient mandala citadel of Arkaim once was. “You might as well enjoy standing on this ancient land,” says Zdanovich. His dream is to build New-Arkaim nearby, a full-scale replica of the citadel. Until now, the only way to study the fortress has been to use the miniature model in the museum. Two circles of defensive walls – wooden frames covered in clay. Inside, the houses touch each other and are in a circle with their doors on the roofs. All the houses look the same; there do not appear to have been particularly rich or poor dwellers. Each house has a well, and most have a smelt-furnace to make bronze from mixtures of copper and tin ore. Robust bronze gave a powerful impetus to the development of technology and culture, which is why we call it the Bronze Age. They made needles and fishhooks from bones, clothing from leather and fabric woven from hemp. They mostly ate cereals with meat and occasionally fish.

“The traditional economic model that we are accustomed to now was created at that time with cattle and crop farming,” Zdanovich says. “The most common crops on Arkaim patches were millet, onions and barley.”

Cattle were kept outside the citadel, between the walls and the moat. “It was crucial for them to surround themselves with water. The towns were built near a river and encircled with a canal,” Zdanovich says. “This must have had some symbolic significance as well.” Everything is symbolic here – from ceramic ornaments with swastikas on them to the town itself, which was all built at the same time to a comprehensive plan. But there are no drawings, no images of gods, no inscriptions. Nevertheless, the power of its legacy is proved by the fact that when one generation moved, burning the town up as they left, another generation would go back to the same spot and accurately rebuild it – every well, every post in its designated place. This happened over and over again, and there are records that they did not stay for a great length of time.

“A frustrated civilization” is what archaeologists call it. But sometimes it feels that “a misunderstood civilization” is a better name because of the sheer scope of the mystery that surrounds it. Even the burials are very odd – a male and a female lie together, embraced, with the female wielding a battle ax over her companion’s head. They used to bury the dead on their sides, implying either a new birth or that death is just a dream.

Malutin says that the Aryans came here from the west, probably from the Volga, and then moved to Central Asia and then India. He believes that their sacred drink included cannabis boiled in milk with an addition of ephedrine.

“Why do you think they are the same Aryans that later came to India and Iran?” I ask Sergei Malutin.

“The Rigveda and Avesta contain descriptions of the place where the Aryans came from – it has birch trees and climate looking like ours,” he says. “They had similar burials and the skeletons are of the Indo-European anthropological type… There is another, key feature, chariots, which were used only by the Aryans at that time.”

This article can be read in Russian in Russkiy Reporter.