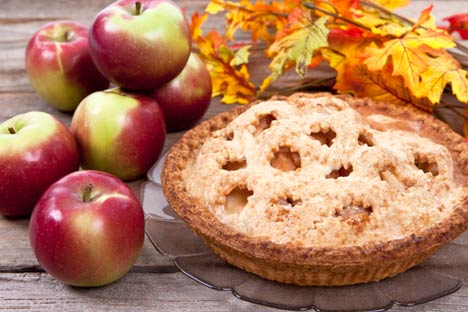 The dog days of summer are dwindling and there is more than a hint of autumn in the air. For cooks all over the world, autumn is synonymous with apples, and in Russia, Aug. 19 marks the official opening of apple season with the celebration of “Apple Savior” or “Yablochniy Spas.”

Rooted in traditions that are both pagan and Christian, Yablochniy Spas, like so many of Russia’s ancient holidays, has not only religious, but deep agrarian and culinary significance as well.

Few peasants living in the pre-revolutionary era could read or write, but they were deeply in touch with the rhythms of the agricultural seasons and observant of the celebrations of saints days, feasts and fasts. Over the centuries, these two important threads of their lives became interwoven to such an extent that peasant lore directed the planting and harvesting of certain crops on particular fixed points during the liturgical calendar. Yablochniy Spas is connected to the Christian celebration of the Transfiguration of the Lord.

Soviet leaders tried to discourage all liturgical holidays, but Yablochniy Spas proved a tenacious fixture in the Russian calendar. Happily, post-perestroika society has enthusiastically embraced a return to the full flung celebration of this harvest festival, which spotlights apples in all their glory: made into jam, pressed into cider or kvass, dried, preserved, made into pies, or just baked in the oven with sugar and nuts.

Devout Russians bring apples and other autumnal fruits such as plums and grapes to church on the eve of Yablochniy Spas to be blessed, and the day itself is spent in a lively holiday atmosphere of street fairs, dancing, and other harvest celebrations. A potent symbol for both pagans and Christians, apples represent life, immortality, and bounty.  On Yablochniy Spas, apples contain special powers – one who eats an apple on the holiday and makes a wish will have it granted. Yablochniy Spas is also associated with a more sober reverence of the dead, and to this day, many pause to take the time to visit the graves of those who have died, bringing edible tributes, most especially apples to represent the Transfiguration, as well as honey and nuts.

No celebration of Yablochniy Spas is complete without a traditional Russian apple cake.  While other cuisines separate pastry dough from fruit in cakes and pies, in Russia, the two are mixed together, which I find is a delightful way to experience the contrasting flavors of tart apple and creamy dough.  This cake is easy to make and flexible in terms of ingredients. Topped with a spoonful of ice cream or whipped cream there really is no better way to usher in the flavors of autumn!

This recipe, adapted from Lesley Chamberlain’s “The Food and Cooking of Russia” is a quick and easy one I’ve made many times, but each time is different since I like to play around with the fruit ingredients.  Apples are wonderful, but I find they really benefit from being paired with other fruit flavors, as I have done here.  The re-hydrated dried apples are optional, but I find they give the cake a very deep apple flavor that is hard to achieve from fresh apples by themselves.

- 1 cup of dark rum or Calvados

2. Place the dried fruit, jam, and rum or Calvados into a saucepan over medium heat. Bring to a simmer, then lower heat and cook for 10 minutes.  Remove from heat, cover, and let sit for at least 20 minutes. Set aside.

3. Butter a 9-inch spring form pan or bundt mold and coat with breadcrumbs.

5. Toss the fresh apple and plum pieces with the stewed dried fruits and rum.

6. Beat the egg yolks and sugar in a standing mixture at medium speed until slightly thickened and creamy (2 minutes). Add the sour cream and beat for an additional 20 seconds at medium low speed.

7. Add the flour, spices, salt, and apple mixture to the batter.

8. In a clean bowl, beat the egg whites until they form stiff, shiny peaks.

9. Gently fold the batter into the egg whites until just combined.

10. Pour the batter into the spring form pan or bundt mold. Twirl the pan sharply to the left and right a few times to release any air pockets.

11. Bake in the preheated oven for 40 minutes until puffed and golden. Let cool for 10 minutes and serve, topped with ice cream or whipped cream.