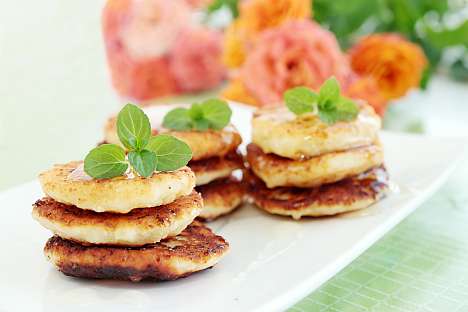 Healthy food company founders wanted to offer a broad range of choices, so they worked on developing low-fat cheesecake along with wraps featureing fresh fillings of meat, fish and vegetables. Source: PhotoExpress.

A company aptly named Healthy Food hopes to encourage office workers to eat better – with the help of vending machines.

Maria Kolosova and Dmitry Pronin became friends when they worked on the same development project. Kolosova was outsourced as an advisor to Uralsib, where Pronin held a top position. They saw at once that they had a lot in common. Both tried to live a healthy lifestyle – Kolosova is a marathon runner and Pronin plays amateur sports – and both were interested in starting a business.

When the development project at Uralsib was halted because of the global downturn, Kolosova and Pronin decided to try and start a business together based on their common interest, targeted at office workers.

“Dima brought a suitcase of products marked as healthy foods from Europe, but many contained mayonnaise, preservatives and vinegar,” Kolosova said. “So I started making up my own recipes in my own kitchen.”

Kolosova and Pronin named their company Healthy Food and worked on creating lunch options that fit the label. They wanted to offer a broad range of choices, so they worked on developing low-fat cheesecake along with wraps featureing fresh fillings of meat, fish and vegetables. They replaced mayonnaise with a signature cheese sauce made from Finnish brie and cream, as well as cranberry and celery sauces.

In January 2009, the first Healthy Food café opened in the Krylatskie Kholmy business center, home to 10,000 office workers. Kolosova and Pronin hired cooks, but Kolosova found that starting a small business takes more hours than you can pay employees to work. “The cooks went home at night and I had to cook myself and ask my children for help,” Kolosova said. After six months, the partners managed to pay their first wages out of profits.

The project required about 10 million rubles in investments during the first year. Kolosova sold her two-bedroom apartment in Moscow; Pronin sold his car, stocks and his $20,000 Patek Philippe watch.

“Many people don’t feel the need to eat healthy food, so we have to inculcate this idea into the public,” Kolosova said. She began holding regular corporate training sessions on healthy lifestyles, giving lectures on food choices and how to incorporate exercise into the workday. This side business laid the foundations for the Healthy Food marketing campaign.

The company opened several new cafés, but one in five had to be shut down for lack of business, but even this was part of the learning curve. “We have gained experience and don’t open cafés in the wrong places anymore,” Kolosova said. Today, Healthy Food has 14 successful cafés.

Healthy food from a machine?

The company started selling food from vending machines during its first year. Pronin says that vending specialists did not believe they could be successful selling products from machines with a short shelf life. But the partners believed that vending machines were an important part of their business plan. It is fairly easy to convince an office to accept a vending machine as they take up a small amount of space. Then, after the office workers are used to the menu, it is easier to convince management to try and open a café. Today the company has more than 30 machines, which account for 10-15 percent of Healthy Food’s total income.

Kolosova admits that it is hard to monitor the quality of perishable items in vending machines. She says the company works with distributors and consumers to address quality control complaints. “First, we check the temperature in the machine, on each shelf, then we look at how the quality of foods was checked when it was accepted from the suppliers, and then we offer the dissatisfied customer compensation in the form of our products,” Kolosova said. “A girl once called us and complained about mold on cheesecake. We investigated and found out that a new employee was responsible for packaging – she had put hot cakes into a plastic container without waiting for them to cool down. As a result, condensed steam encouraged mold.”

A small piece of a small market

The capacity of the Russian market for corporate catering is about $6.7 billion euros ($8.25 billion), according to the Sodexo catering company. Of the total, outsourced services account for 1.5 billion euros ($1.85 billion), according to Sodexo analyst Denis Shershnev. The biggest market players in Russia other than Sodexo, are CorpusGroup and Megafoods (which both specialize in industrial facilities), CantinaCity (which targets offices), OMC, and CompassGroup. Local restaurant owners are also trying to approach this market.

Nearly all the corporate catering market players currently offer healthy menus, according to Ernest Lepsky, general director of catering firm LanCh. Said Shershnev: “A café with a healthy eating concept enjoys a growing demand, but I don’t believe that sales of such foods in vending machines have a future,” adding that machines are not associated with healthy fresh foods and cheesecake should be eaten warm and freshly cooked in a café.

Other experts disagree. “Vending machines offering healthy foods are better than courier delivery. You can have snacks more often, which is healthier, according to nutritionists,” said Yury Balushkin, development director of the Zdorovye (health) magazine.

Healthy Food is now hoping to branch out to a broader audience. It has developed a new café format, “Cook, little pot!” for food courts in malls. The first café of this kind will open this September. Regular dishes – cabbage soup, ragouts and hot cereals – will be cooked and served in clay pots. “The pots will have our brand name on them, and we are aware that some 30-40 percent of customers will want to keep them, so the additional costs have been accounted for,” Kolosova said.