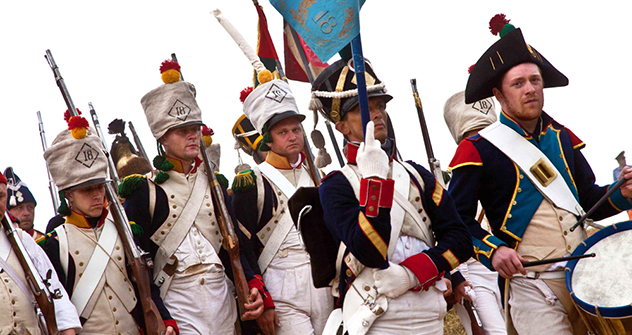 The reenactment of the Lubino Battlefiled was part of Russia’s celebration and commemoration of the 200th anniversary of the Patriotic War of 1812. Source: Olga Lisinova / RG

Descendents of the heroes of the Battle of Borodino describe what the event meant to their families.

Field Marshal Kutuzov’s daughters were the only ones of his children to survive to adulthood, and therefore his descendants have different surnames. Everyone knows that Kutuzov was an ambitious man, but not many know that he was a very affectionate father. Kutuzov never attacked on the family front. When his daughter Annushka, my direct ancestor, said she wanted to hold a musical salon, Kutuzov supported her.

During the Great Patriotic War, I was evacuated from Moscow and ended up in a children’s home: On fine days we would work in a lumber camp, and when the weather was bad we would perform for the wounded in the hospital. After the war, I found work in the People’s Commissariat for Foreign Trade and worked in the foreign economic relations system for 44 years. My first foreign posting was to Guinea – I spent two-and-a-half years there.

“I returned to Russia and went into business”

2. Pavel Kulikovsky, 51, a descendant of the house of Romanov

The Battle of Borodino is an important symbol not only for Russians, but also for Europeans, because it was after this that the liberation of Europe from Napoleon’s forces began. And two years later Alexander I, who had made the strategic decisions in the 1812 War, rode into Paris in triumph. Unfortunately the emperor had no direct descendants, and therefore the descendants of Alexander’s brothers and sisters are regarded as his heirs. My direct ancestor was the future emperor Nicholas I, Alexander’s brother.

I was born in Canada, where my great-grandmother, Alexander III’s daughter Olga, had moved, and then my family moved to Denmark, where I lived for about 40 years. But at an exhibition in Washington I met my future wife, a Russian. We got married in London, and in 2008 we began to live in Moscow. I am now finance director of a Danish company working in Russia.

“My ancestors were on both sides of the barricades”

3. Dmitry Shebalin, 17, a descendant of the noble Langov family and of the Frenchman Jean Pasteur

On my mother’s side, I belong to the noble Langov family, but unfortunately I have not yet precisely identified the names of my ancestors who took part in the 1812 War. My ancestors on my father’s side also include French people, and one of them, Jean Pasteur, fought on the side of Napoleon’s guards. He was the father of the famous microbiologist Louis Pasteur, who was the brother of my direct ancestor.

Generally, when I am at the site of the Battle of Borodino I find it difficult to imagine that this grassy place was a battlefield and that one of my ancestors was standing on the redoubt and could have been blown apart by a cannon ball at any moment. I am myself in my first year of study in the faculty of journalism at the Moscow State Institute of International Relations and am actively involved in the youth section of the Assembly of the Russian Nobility.

“I prefer sheep and hens to history”

My most famous ancestor is General Mikhail Andreyevich Miloradovich. At the Battle of Borodino, he commanded the right flank of the 1st Army, headed the forces in the engagement near Vyazma, which was devastating for the French, and pursued Napoleon’s army all the way to Paris. He was granted the title of count for his successful actions. But in 1825, he was shot by the Decembrist Kakhovsky in Senate Square. That’s probably why I have not found his portrait either in the gallery of war heroes on Poklonnaya Hill in Moscow or at Borodino. After all, in the Soviet Union people were very fond of the Decembrists. Now the Soviet Union has collapsed, but there still isn’t a portrait of Miloradovich hanging anywhere.

I grew up in the Canadian city of Montreal and still live there. I am a historian by training, but my most passionate interest is not family history but rather hens, cows and sheep – I spend a lot of time attending to them at my farm.

“I have an interest in genealogy”

5. Andrei Seslavin, 30, a descendant of the guerrilla leader Alexander Seslavin

According to family tradition, Major General Alexander Nikitich Seslavin is my direct ancestor. He is famous for being involved in the guerrilla movement. Seslavin is often forgotten, yet his achievements were very great. Seslavin was the first to establish both the fact that the French troops had withdrawn from Moscow and the direction in which they were withdrawing. He reported the information to the headquarters in time, and this undoubtedly assisted the favorable outcome of the whole campaign.

I am a management economist by training and live in Moscow, and I work in my specialist field. I recently added a new interest to my love of history – DNA genealogy. I am leading one of the international research projects.

“Our ancestor lost a leg, but made it to Paris”

6. Vissarion Alyavdin, 56, a descendant of Major General Ivan Ushakov, with his daughter Maria

My ancestor Ivan Mikhaylovich Ushakov was wounded in the arm in the war of 1806-1807 against Napoleon and received the Golden Sword for Courage. In 1812 at the Battle of Borodino, Ushakov was commander of the Chernigov Regiment, part of Peter Konovnitsyn’s division. During the battle, my ancestor’s leg was shattered and had to be amputated, but the circumstances favored him – Ushakov caught up with his regiment with an artificial leg and took part in the capture of Paris.

For 12 years I have been head of the Society of Descendants of Participants in the 1812 War. But this is public work, whereas my main role is as president of the Foundation for the Revival of the Russian Country Estate.

“I translate for Russian immigrants in the United States”

My great-great-great-grandfather Peter Petrovich Konovnitsyn considered it his duty to defend the great country of Russia in 1812. During the campaign he headed the rearguard of the Russian army – he repulsed attacks by the French so that the army could leave for Borodino. In the battle itself, Konovnitsyn commanded the defense on the left flank after the death of Bagration and got a concussion. He then became duty general under Kutuzov, and in 1815 he took up the post of Russia’s minister of war.

I was born and live in Los Angeles – my ancestors emigrated to the United States after the revolution. I am very rarely in Russia – before this visit, I was here last in 1994. But my profession is linked with the Russian language – I do translations from Russian to English. For example, when an emigrant from Russia ends up in hospital I enable him and the doctors to communicate.

“I take part in historical reenactments”

8. Karlen Khachatryan, 17, a descendant of the Kolpakov Cossacks

Two of my ancestors were heroes of the 1812 campaign – Andrei Yakovlevich Kolpakov and Peter Andreyevich Kolpakov, father and son. They were Ural Cossacks: one held the rank of sotnik and the other that of yesaul. In 1814, they both reached Paris.

I have not yet managed to visit France, although I have been to many European countries. True, I can say that at Borodino I have put my foot onto French soil – there is a memorial there, and the land around it belongs to France. I have been visiting the Borodino field for 10 years and I take part in historical reenactments. But my interests are not limited to the 1812 War – in the Musketeer military history club, we also stage reconstructions of events in the Great Patriotic War.

“The French have stopped blaming their defeat on the weather”

I was very hurt not to find my ancestors in the Gallery of Heroes of the 1812 War, which is in the Hermitage. My family made a significant contribution to the outcome of these events – a total of 11 Musin-Pushkins took part in the war. My direct ancestor Ivan Alexeyevich, son of Alexei Ivanovich, who discovered the manuscript of the ancient chronicle Slovo o Polku Igoreve – was a major general.

I used to be the commercial director of a big American chemicals firm, but now I am retired and a French citizen. I can still remember how the French everywhere used to say that it wasn’t the Russians who had defeated them, but “General Winter” – our harsh climate.