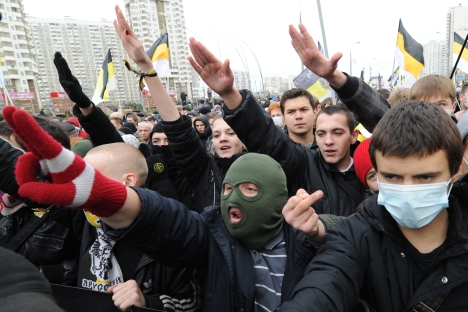 Although the idea for a separate Ministry for Nationality Affairs fell flat, the Russian government still believes the issue should be addressed.

A source in the president’s office has said that by the end of the year Russia is likely to get an ombudsman to deal with ethnic conflicts.  The creation of a new ombudsman’s office is another attempt by the government to deal with ethnic issues after there was no traction around the idea to create a Ministry for Nationality Affairs.

“So far, the issue has not been finalized, meaning that the candidate for the post has not yet been agreed. Within the executive office, the shortlist of possible candidates includes presidential advisor for national culture Vladimir Tolstoy and State Duma deputy Gadzhimet Safaraliyev,” said the source in the presidential administration who wished to remain anonymous.

Gadzhimet Safaraliyev, chairman of the State Duma Committee for Nationality Affairs said: “First, they created a presidential council for nationality affairs but now they need someone to act as ‘the eye of the tsar.’ This person will monitor relevant processes in society and report directly to the President.” Safaraliyev said: “They had to give up the idea of a separate ministry to handle ethnic affairs, since such a body would plainly lack responsibilities that are partially assigned to other agencies.”

According to Safaraliyev, the position of ombudsman requires the candidate to be well informed about the problems in all regions of Russia – to be “an internationalist to the core.”

The new ombudsman will be required to find solutions to national conflicts in various regions, search for an individual approach to new situations and, most important, respond promptly to these.

“The council on nationality affairs can only be summoned, say, once a year, whereas the ombudsman will always have the president’s ear and will be in a position to respond immediately and deal with the challenges as he goes along,” Safaraliyev said. “His position will grant him a certain degree of independence and freedom, because he would otherwise be unable to provide an objective assessment of different situations.”

According to the State Duma deputy, the ombudsman’s primary responsibility will be to create a sort of map highlighting those regions where ethnic conflicts are most frequent. He will not even have to start from scratch, his major task being to streamline activities across all Russia’s regions.

“Many regions are in the process of creating domestic policy agencies and are keeping tabs on internal and external migration, so the ombudsman will actually have enough information and will have the right people to work with,” Safaraliyev said. “The ombudsman’s executive office will have regional representation and his people will be positioned to deal with all incipient conflicts locally, since the ombudsman will certainly not be able to handle all the work single-handedly from Moscow – the country is huge.”

Safaraliyev said that he is ready to give the new commissioner advice.

“We have to put together a sort of employment test for officials that would help determine how good the candidates are at dealing with people, how tolerant they are, what their attitude toward international relations is, whether they have any knowledge of the mentality, history and religions of various peoples,” Safaraliyev said. “When we hire people, we have to evaluate their professional qualities rather than personal traits.”

For his part, Alexei Mukhin, general director of the Center for Political Information, doubts that a single person could deal with such an enormous issue as ethnic relations and ethnic conflicts.

“When an ombudsman for business or nationality affairs is designated, it becomes clear that the person will always be the scapegoat,” said Muhkin. “Whether a single person is at all capable of resolving the problems of many ethnicities and settling the ongoing conflicts, which are on track to multiply, is still an open question. Such a person must be a very influential political heavyweight comfortable with acting as an arbitrator.”

The government became very concerned about ethnic conflicts after a mass fight sparked by an ethnic conflict started in Kislovodsk on July 21. Following the incident, the government was charged with working out steps to improve the activities of Russia's governmental agencies engaged in preventing ethnic conflicts. The final draft of the measures is to be considered by the cabinet in October 2012.