One step forward, half step backward… 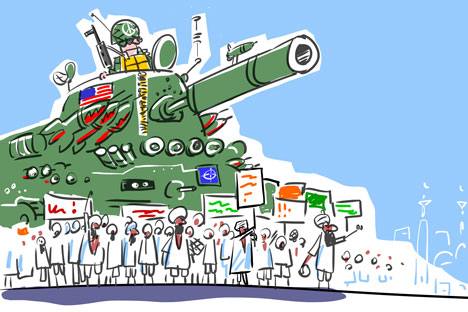 Pakistan's army is drawing the ‘red line’ on the operational front at the commencement of a critical phase of the ‘transition’ in Afghanistan.

When the army chief in Pakistan speaks, there is always a hush in the air. The best brains go into huddle and his words get analyzed threadbare for its meaning(s), hidden and apparent. Given the history of Pakistan’s political economy for the past 6 decades, it can’t be otherwise. Just this week, a highly rated Pakistani commentator and analyst Tanvir Ahmad Khan (former foreign secretary and ambassador to the former Soviet Union) wrote, “Despite Pakistan’s sad experience of military rule in the past, a surprisingly large percentage of its people are once again beginning to look to the army for deliverance from an elected government that has disappointed them deeply.”

To be sure, analytical exercises began almost instantaneously over the remarks by the Pakistani army chief General Ashfaq Kayani on Monday that if militancy is not eliminated, Pakistan’s future will be in jeopardy. Big conclusion have since been drawn that the army chief is preparing his soldiers and the countrymen at large for the imminent launch of a military campaign in North Waziristan where the most irreconcilable Afghan insurgents associated with the so-called Haqqani network and its al-Qaeda affiliates ranging from Uzbek militants to the ‘Pakistani Taliban’ are based.

Far away in the Pentagon in Virginia, United Secretary Leon Panetta too read a meaningful message into Kayani’s words. Panetta lent his powerful voice to articulate Washington’s judgment that in the “near future” – which in coded diplomatic language means a matter of days or few weeks – Pakistani army would launch combat operations in North Waziristan. “They’ve (Pakistan) talked about it for a long time. Frankly, I’d lost hope that they were going to do anything about it. But it does appear that they in fact are going to take that step,” Panetta added optimistically.

It stands to reason that Panetta felt encouraged to voice the optimism also on the basis of the official feedback he received on the recent meeting between the Central Intelligence Agency boss David Petraeus and his visiting Pakistani counterpart Zaheerul ul-Islam, which were apparently “substantive, professional and productive”.

At any rate, Panetta couldn’t be faulted because Kayani had indeed spoken in strong terms: “We [Pakistan] realize that the most difficult task for any army is to fight against its own people. But this happens as a last resort. Our real objective is to restore peace in these areas [North Waziristan] so that people can lead normal lives. No state can afford a parallel system or a militant force.”

The army chief couldn’t have juxtaposed Pakistan’s existential choices more starkly. The Western media promptly took note that top US military commanders have also been frequenting the Army Headquarters in Rawalpindi in the recent days – the last, by the way, being the CENTCOM chief General James Mattis. The US media have since hastened to christen the anticipated joint US-Pakistani military operations against the Afghan insurgent groups in North Waziristan – ‘Tight Screw’.

At this point, things began to unravel. And it is turning out to be an unceremonious unraveling. It all began with the devastating strike by the militants last Thursday on Pakistan’s famous Kamra air base where some of its nuclear missiles and the delivery systems have been kept.

Obviously, the army leadership has sensed that the hype created by Washington and the US’ vocal lobby within Pakistan is creating an explosive mix of anger and resentment in the Pakistani public opinion and creating an impression that something big is going on between the Army Headquarters in Rawalpindi and the Pentagon.

Suffice to say, if Panetta’s hype aimed at hustling the Pakistani military leadership into harmonizing with the US’ regional project in Afghanistan and Central Asia, that has proved counterproductive. Kayani has pulled back the big step he had put forward. At a meeting with Gen. Mattis in Rawalpindi on Thursday, he “categorically dispelled” the speculations regarding ‘Tight Screw’.

Kayani explained to Gen. Mattis the importance of distinguishing between ‘coordinated action’ by the US and Pakistani forces and ‘joint operation’. Whereas ‘coordinated action’ merely “implies that Pakistan Army and ISAF conduct operation on respective sides of Pak-Afghan Border”, a ‘joint operation’ goes much, much further and “implies that the two forces are physically employed jointly on either side of the border.”

Besides, “intelligence sharing is the mainstay of mutual cooperation” in a ‘coordinated action’. In short, ‘coordinated action’ is mere foreplay that holds no guarantee of a full and proper enjoining by the two militaries on the two sides of the Pakistan-Afghan border.

Kayani underlined to Mattis that a ‘joint operation’ between the Pakistani and US forces is simply “unacceptable to the people and Armed Forces of Pakistan, hence, has always been our [Pakistan’s] clearly stated red line.”

Kayani then went on to put the Pakistani army thinking in the correct perspective: “we might, if necessary, undertake operations in NWA [North Waziristan Agency], in the timeframe of our choosing and determined only by our political and military requirements. It will never be a result of any outside pressure. Pakistan’s national interest continues to be the prime consideration for any decision in this regard.”

In sum, Kayani has politely and firmly resiled from whatever notions he might have created in the minds of the Americans regarding any new dimension to the ground level f US-Pakistani military cooperation in the tribal areas on the Pakistan-Afghan border. From all appearance, he spoke on his own authority. (As is customary, the Pakistani army issued the press release on the Kayani-Mattis meeting.)

How perplexed Gen. Mattis would have been we may never know, but this certainly becomes a mini-setback to the US-Pakistan discourse, which was raring to go following the agreement on the reopening of NATO’s transit routes via Pakistan, and it holds significance for regional security. In the final analysis, what matters is that Pakistani army is drawing the ‘red line’ on the operational front at the commencement of a critical phase of the ‘transition’ in Afghanistan. This is happening at a time when the Afghan insurgents are apparently stepping up their attack on the western forces and Washington is preparing for the next round of negotiations with the Kabul government to formalize the establishment of military bases in Afghanistan.

What prompted Kayani’s retraction? Conceivably, Panetta went way out of line by spilling the beans about what the US and Pakistani military leaders had probably agreed in the recent weeks. At that level, Panetta spoke on authority but he probably unwittingly put Kayani on a spot when he disclosed that the US commanders have discussed with the latter their “concerns” about the Haqqani network’s cross-border activities, whereupon, “General Kayani did indicate that they had developed plans to go into Waziristan. Our [US] understanding is that hopefully they’re going to take that step in the near future. I can’t tell you when. But the indication that we have is that they are prepared to conduct that operation soon.”

However, two days later Panetta also revisited the sensitive topic of the danger of Pakistan’s nuclear stockpiles falling into the hands of terrorists and militants. “The great danger we’ve always feared is that if terrorism is not controlled in their country, than those nuclear weapons could fall into the wrong hands,” Panetta told reporters at a Pentagon news conference on Wednesday. Strangely, Panetta made these seemingly impromptu remarks right on the eve of the militant attack on the Kamra ‘nuclear base’, which is located hardly 45 kilometers from Islamabad.

Without doubt, the Pakistani public opinion is militating against any form of collaboration by the Pakistan army with the US military operations in Afghanistan. Again, on its part, the military leadership in Rawalpindi has always insisted that the army should be in sync with the public opinion in the matter, which is of course vehemently against the Afghan war and continued US military presence in the region.

Under the circumstances, Kayani is left with no option but to go back by half a step – at least, for the time being. As for Washington, it should be content for the present that ‘coordinated action’ is after all better than no action at all, although its potentials may fall short of a proper ‘Tight Screw’.