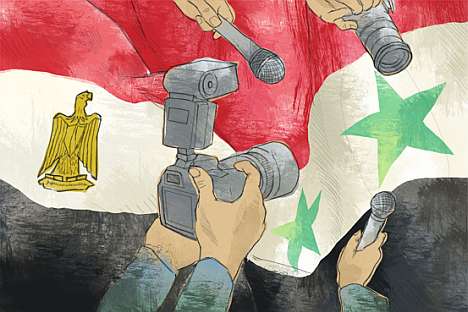 While the major global players are focused on Damascus, a power play is going on in Cairo that could have a more significant effect.

While the world’s eyes are riveted on the Syrian cities of Damascus and Aleppo, Egypt is witnessing developments whose significance for the regional and global future is much greater than even the civil war in Syria.

President Muhammed Mursi, who has just been sworn in, has set about redrawing Egypt’s political map with incredible speed. The sacking of the heads of the Egyptian junta – Defense Minister Hussein Tantawi and chief of the general staff Sami Annan – coupled with the canceling of constitutional amendments granting broad powers to the army, indicate that the Muslim Brothers are in no mood to seek a compromise with the former authorities.

With 80 million residents, Egypt is the Arab world’s most populous country and Cairo has historically been one of the region’s leading capitals. What happened there, as a rule, while not exactly setting a model for the political development of the entire community, made a strong imprint on it. It was the toppling of Hosni Mubarak a year and a half ago and not the earlier events in Tunisia that really triggered the Arab Spring.

That is why everybody wondered from the very beginning what model would take root in Egypt. Three variants were proposed: the Turkish model (power of the military plus a modernization agenda or moderate and relatively progressive Islamists), the Iranian model (a radical Islamic state) and the Algerian model (brutal suppression of democratically elected Islamists by the military).

The Kemal Ataturk model of the 20th century was quickly cast aside because the conditions for it are not present in Egypt. In Turkey, the military acted as a force for renewal after the collapse of an empire, while in Egypt they embody the former regime, even though they have tried to dissociate themselves from Mubarak.

The Iranian scenario was also dismissed as irrelevant early on, because Iran’s system is intimately linked with Shiite Islam. Even if Egypt opts for an Islamic state, it will be a different one.

An Islamic but essentially democratic model still has a chance, according to the Muslim Brothers, but in reality, an Algerian scenario is more likely.  Everyone is waiting with bated breath to see how the military top brass react to Mursi’s attack. In 1991, the Algerian army annulled the results of elections that were set to deliver victory to the Islamic Salvation Front and thus plunged the country into a 10-year-long civil war that claimed more than 100,000 lives, but prevented the Islamists from gaining power.

Even if the Egyptian military decide to do this, success is not guaranteed. The world has changed greatly in the last 20 years. In 1991, the Algerian generals could count on a quiet solution – they knew no one would care about their actions or interfere in their methods. Today, however, should Egypt take this path, both the Islamic world and the West would react extremely negatively. Besides, Egyptian society, as the parliamentary and presidential elections have shown, wants democratic procedures and change, so a military regime would have little support.

If the Muslim Brothers and Muhammed Mursi consolidate their power, there could be the start of a profound realignment of forces and influence in the Middle East. To give one example, the current situation with Israel will not endure, although Cairo is likely revise its policies over time rather than sever the agreements abruptly.

It is unlikely that any of the current Middle Eastern leaders would risk provoking a war with the Jewish state, even if it is a popular idea on the Arab streets. However, the overall erosion of rules of conduct might trigger a series of incidents on Israel’s perimeter, engendering a response that might potentially drag it into a confrontation with everyone.

Washington, of course, has leverage in the shape of the $2 billion it has channeled to Cairo since its accords with Israel were reached. Because the Egyptian economy is in free fall, the Muslim Brothers’ government would be loath to forego that money.

Yet the process of general geopolitical change might lead to a change of sponsors. The key players in the Arab Spring are the Gulf monarchies, whose influence has soared in the last year and a half. The oil kingdoms’ financial clout enables them to support Egypt as strongly as the United States does.

The most acute collision in the near term is connected with Iran, because eliminating the menace of a nuclear Tehran and reducing Iran’s influence is, for all the regional players, the main goal and one element of achieving it is confrontation in Syria.

As long as the Iranian problem exists, the interests of the conservative monarchies, the revolutionary regimes, the United States and Israel coincide. But if that problem is resolved one way or another, the common agenda will fall apart and the tacit temporary accord between Saudi Arabia and Israel will come to an end. And then much, if not everything, would depend on Egypt, its inner state and orientation in the world.